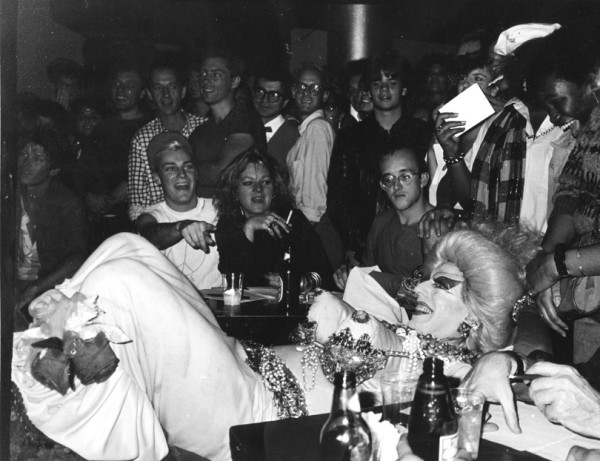 Why hello there, dearest Filthy Dreams readers and fellow filth fanatics! It’s about the right time to announce what your co-founder Emily Colucci and intrepid contributor Osman Yerebakan have been working hard on since December 2013. As you know, Filthy Dreams was originally conceptualized as a sleazy bar before we lowered our expectations and started a blog. Well, we’re getting one step closer to that bar now–moving from a blog to an exhibition. Here…Read our press release and please come to the show:

Party Out Of Bounds: Nightlife As Activism Since 1980, curated by Emily Colucci and Osman Can Yerebakan, focuses on the intersection of the ongoing HIV/AIDS crisis and nightlife from the 1980s to the present. Since the beginning of the AIDS pandemic, nightlife has been an escape, a community, a forum for information about safer sex practices and a center for activism. Taking its title from a B-52’s song, Party Out Of Bounds showcases the transformative possibilities of nightlife as an alternative form of activism.

Featuring 29 artists and collaborators working in a wide variety of mediums including photography, video, painting, sculpture, drawing and site-specific installations, Party Out Of Bounds presents both past and present nightlife scenes from Nelson Sullivan’s video documentation of late performers Ethyl Eichelberger and John Sex, to Jessica Whitbread’s No Pants No Problem Party, an underwear dance party exploring social gathering as a space of advocating for HIV and sexual/gender rights and combatting stigma. The exhibition also highlights archival materials including event flyers by artists Keith Haring and David Wojnarowicz, as well as ephemera from clubs such as MEAT and the Clit Club that merged activism, art, performance and parties.

By creating intergenerational connections between artists such as Peter Hujar,Kia Labeija, John Waters, Wu Tsang and Chloe Dzubilo, Party Out Of Bounds articulates the continual importance and influence of nightlife on different generations. Not only a celebration, the exhibition also acknowledges the losses due to HIV/AIDS whether artists, performers, nightlife participants or the closure of these event spaces themselves.

Party Out of Bounds and related public programming are open to the public and wheelchair accessible. Exhibition tours can be arranged by calling Visual AIDS at +1 (212) 627-9855.

In line with the boundary-crossing nature of the title, Party Out Of Bounds will also hold a one-night satellite exhibition, Courtship Disorder, in London’s White Cubicle Toilet Gallery with an installation by London-based artist John Walter. White Cubicle is located within the Ladies Toilet of the George and Dragon Public House, Hackney. Courtship Disorder, to be held on September 29 from 8:30 PM to midnight, will be the seventh of 10 exhibitions at White Cubicle this year to celebrate their 10th anniversary.

Emily Colucci is a freelance art writer, independent curator and co-founder ofFilthy Dreams, a blog looking at art through a queer lens and with a touch of camp.

Osman Can Yerebakan is an independent art writer and curator based in New York. Osman, who holds a BA in Comparative Literature and an MA in Art Management, contributes to various online publications on contemporary art and curates exhibitions around NYC.

As an extension of the internationally acclaimed La Mama Experimental Theatre Club founded in 1961 by Ellen Stewart, La MaMa Galleria is a nonprofit gallery committed to nurturing artistic experimentation in the visual arts. La Galleria’s programming responds to questions raised by the larger cultural, artistic, and intellectual community.

Visual AIDS utilizes art to fight AIDS by provoking dialogue, supporting HIV+ artists, and preserving a legacy, because AIDS is not over. Visual AIDS is the only contemporary arts organization fully committed to HIV prevention and AIDS awareness through producing and presenting visual art projects, while assisting artists living with HIV/AIDS. Visual AIDS is committed to preserving and honoring the work of artists with HIV/AIDS and the artistic contributions of the AIDS movement. For more information about Visual AIDS, please visit www.visualaids.org

Join in the conversation with Visuals AIDS on:

7 thoughts on “You Are Invited To–Party Out Of Bounds: Nightlife As Activism Since 1980”