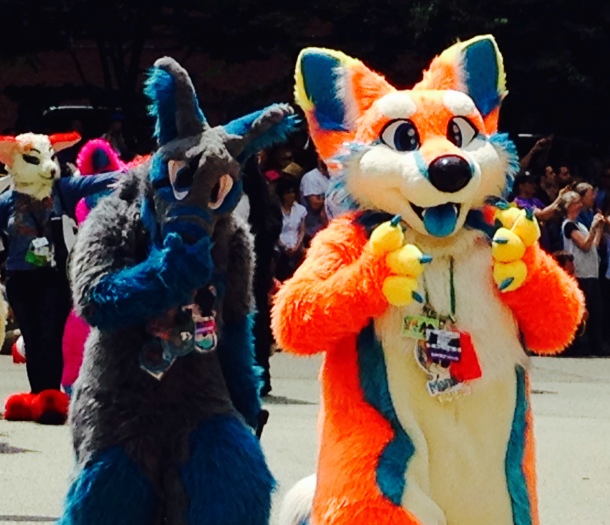 Furries welcome you to Anthrocon 2015 (all photos by author)

Filthy Dreams Editor’s Note: From yiffing to erotic Furry illustrations (warning–don’t Google) to men in suits with tails attached wandering through Downtown Pittsburgh, Anthrocon is a yearly dose of be-furred hilarity in a city that already tends toward the surreal. Unfortunately stuck in New York and missing this year’s annual gawking at the Furries, I asked my ever-ready and easily excitable mother to cover the event for Filthy Dreams to see just how far tolerance can go. What is our limit? We want to be accepted but just how much are we willing to accept? As I said to mother before she set out to find the Furries, “Don’t make me regret this.” :

Another summer, another Furry Convention, or more accurately, Anthrocon- Viking Invasion, in the ever-welcoming ‘burgh, Pittsburgh that is.  Except this year, Mama’s been assigned by your Filthy Dreams editor to pictorially cover the fuzzy event as an FD correspondent!  New this year too, is a Fursuit PARADE, open to the public.  Whoohoo!  (Let it be known, your editor desperately wanted to chronicle the event, but, being chained to her work in the Big Apple, ‘lined-up her metro Mama to sub.  Delightedly witnessing the Furry Convention in the past, Colucci reportedly exclaimed, “Oh my God, it’s Christmas morning!”)

Asking Editor Emily for a press pass to the convention, I was informed “they run a pretty tight ship”, requiring written permission two months in advance.  What-the-hell?  PittsburghDad got a story from the “inside”.  ‘no matter.  I’ll paparazzi it from a bar across the street.  ‘even better.  I’ll need a martini for this assignment.  I’ve dug out my red sunglasses so I can be incognito.

Who wants to go to those boring seminars anyway?  Oh, wait.  Looking at the schedule, here’s “The Man, the Legend, the Chicken: The Origin of The Famous Chicken”.  That’s the “fur suit guest of honor”, the San Diego Chicken!  Oooo, and “Unleash Your Inner Animal”, by Cali Coyote.  That could be enlightening.  “Whose Lion is it Anyway” and “My Little Pony: Friendship is Magic” sound intriguing.  Oh!  Here’s one for Mama:  “Friendly Feline Furry Fiasco”!  I like kittycats.  Hmmm…”Writing After Dark, Advanced Topics – Kink Writing”.  Mercy!  Oh, that seminar’s held at midnight, after Mama’s bedtime, thank God.

What is a Furry, you ask?  Well, let Mama Look it up for you.  In the Urban Dictionary: furry – “There is no one single definition of what a furry is”.  Okay, that was helpful.  Wait, lemme see…looky here!  On the Anthrocon site under the question “Just what IS “Furry” fandom”? is the posit “If you as an adult still occasionally like to flip to the old cartoons, or have a stuffed animal sitting on the dashboard of your car, or buy cereal because it had a cool tiger on the box, you may well enjoy what our fandom as to offer”.  Uh-huh.  I think I’ll just take a bunch of pictures.

Friday, July 10:  Mama is SO excited about photo’ing the fuzzy varmints attending the Furry Convention, that, even though the parade is on Saturday, Mama’s honey, Daddy, suggested a lovely evening in the ‘burgh, strolling through the Gallery Crawl and catching some Furry snapshots along the way:

Editor’s note: Dad has never said and will never say that line, but go on…

And, honey, we hit the mother lode!  My, my!  Lots and lots of Furries!  What an accommodating, polite, bunch of soft-spoken beasties!

Mama: “Hello!  May I take your picture?”

They posed for Mama!

(Insert a boatload of pictures here) 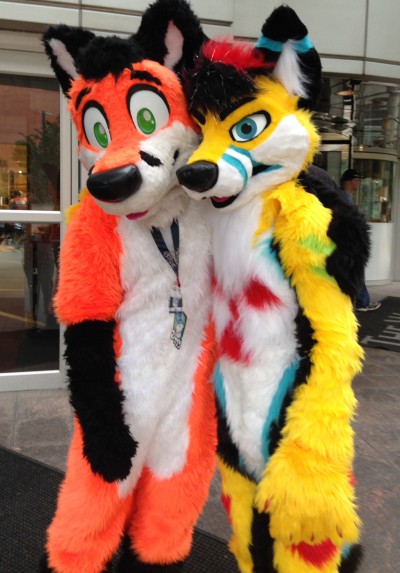 Look at these two canoodling fuzzers! 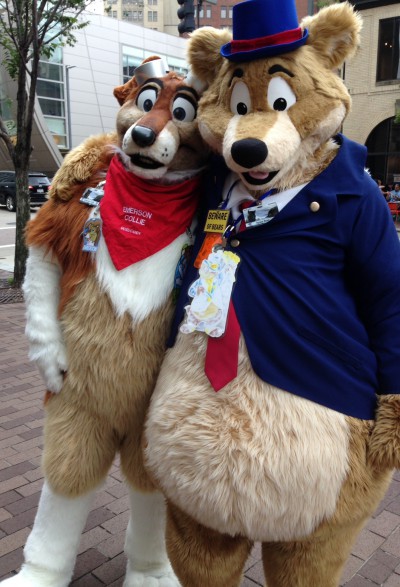 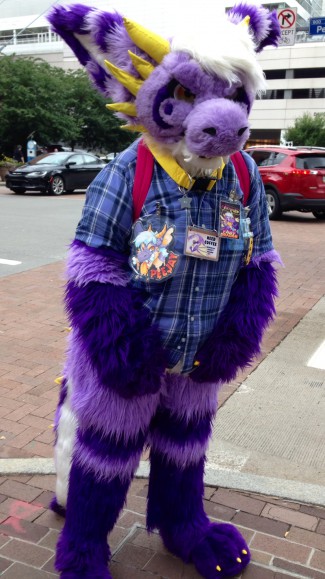 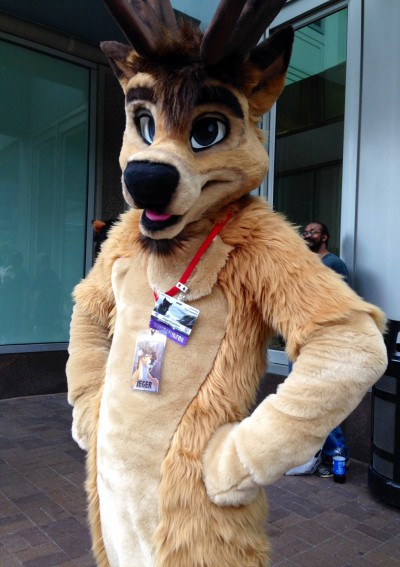 And what to my wondering eyes should appear? A reindeer! 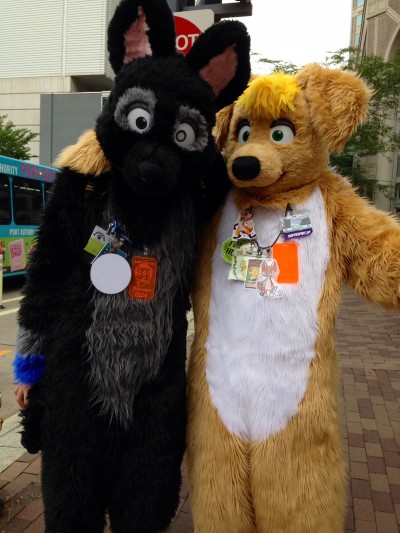 Now, under the black mask, is one tall, good-lookin’ young man! 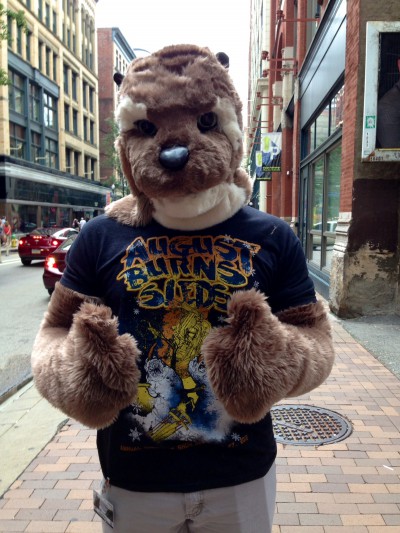 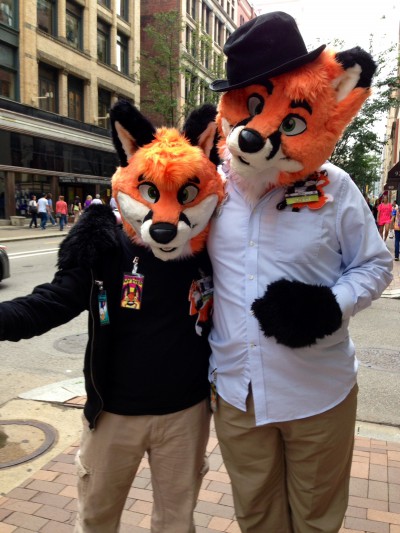 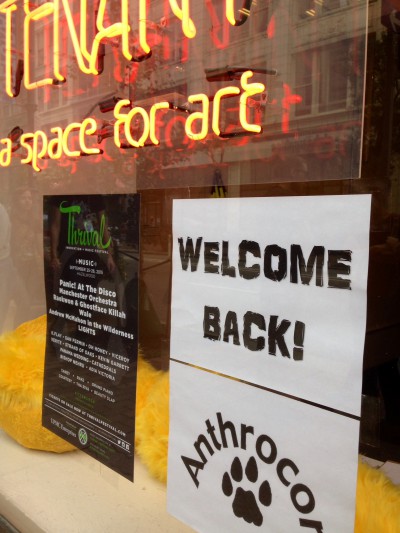 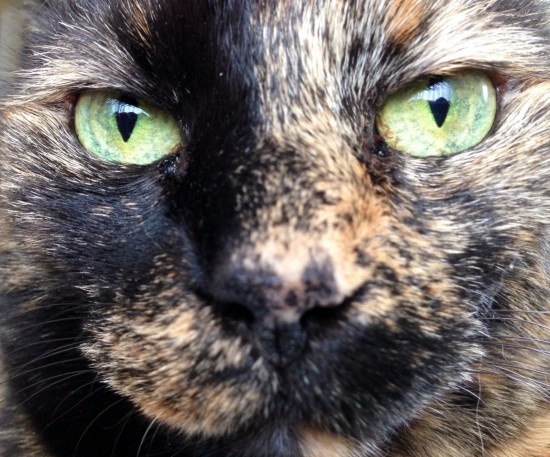 This Furry is so life-like! Oh wait, honey…this is Mama’s kittycat 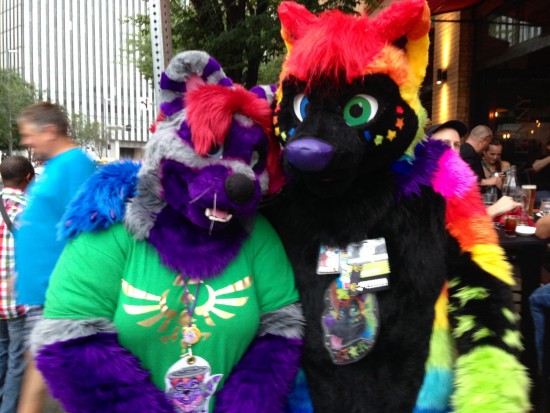 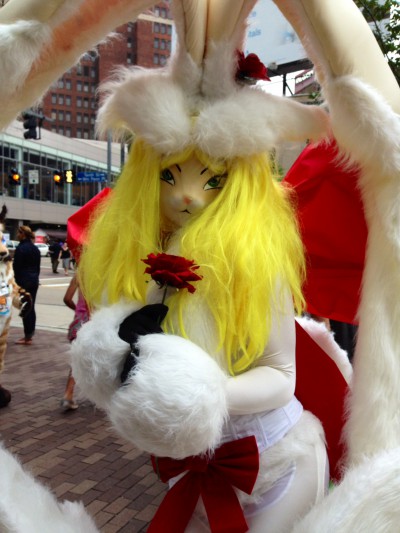 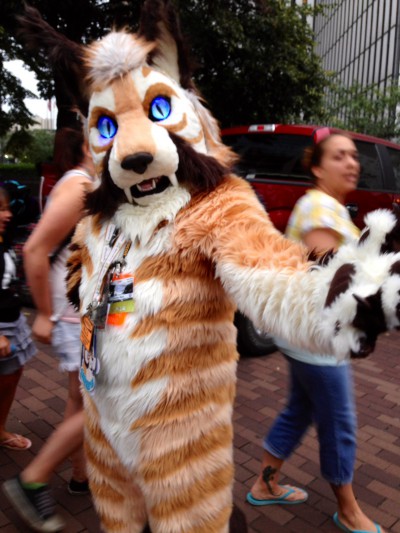 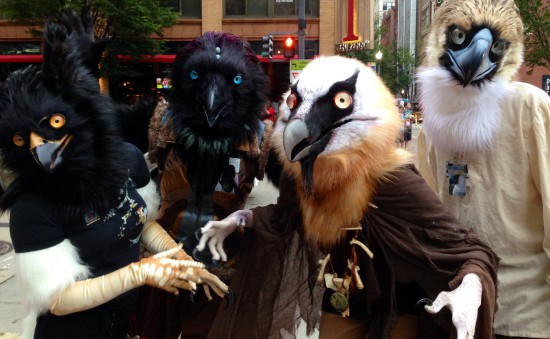 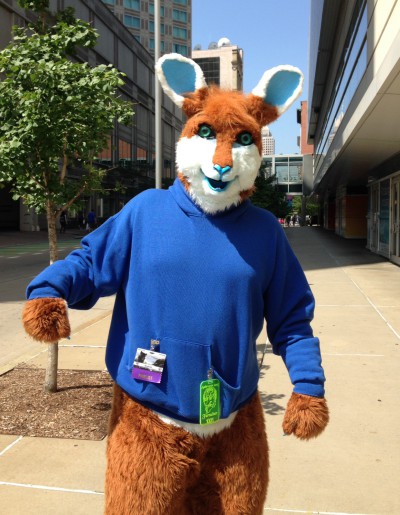 Saturday, July 11:  Today’s the day!  ‘day of the Furry Parade.  Pittsburgh is all-a-buzz.  Mama and Daddy travel downtown early to check out the finished wall art at Space from the Gallery Crawl and head to the bar across the street from the parade route, which is SLAMMED!  ‘lucky we have reservations, but, “Oh look!”, there are two seats at the bar.  Seated at the bar, the manager comps us two cocktails.  Thank you, manager!  After dining on brunch and cocktails, we mosey on down to the convention Center, a few minutes before the parade.  Boy howdy!  Pittsburgh has turned out!  We are handed a “I (paw) Anthrocon” sign and await the parade.  Thousands of yinzers are here and are soooo excited!  This is the first public parade.  And, it does not disappoint.  While the crowd cheers and flutter their signs, many varied critters wave and high-five the kiddies as they strut and march while being photographed and filmed by local media and all the yinzers.  Joy and mirth fill the air! 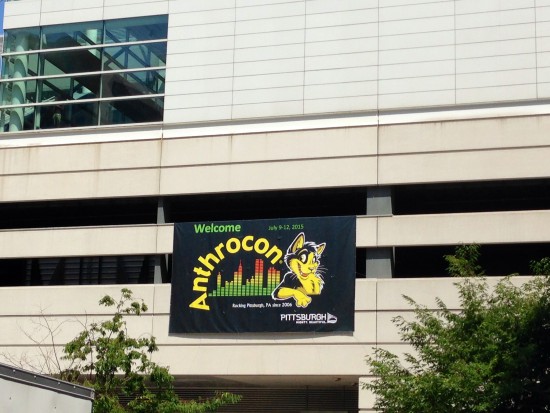 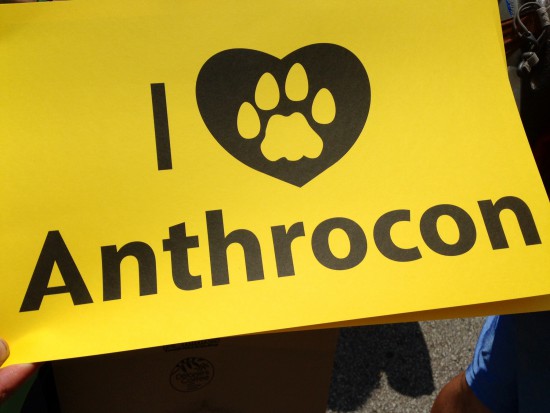 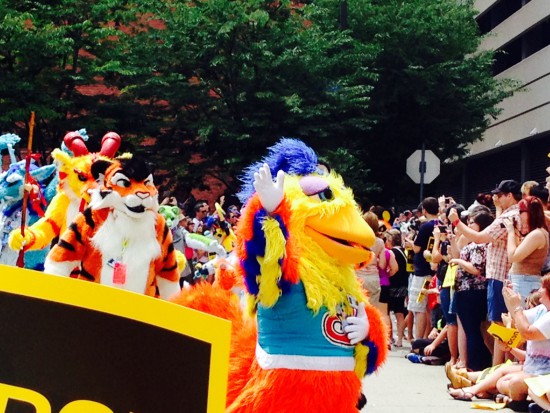 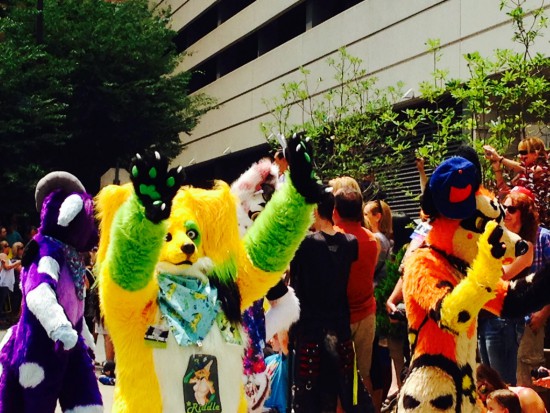 Colorful critters in the parade! 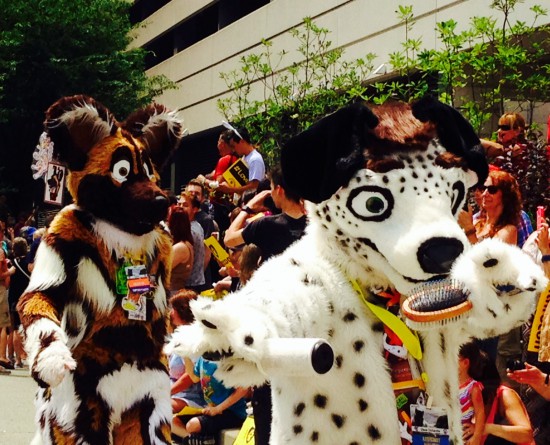 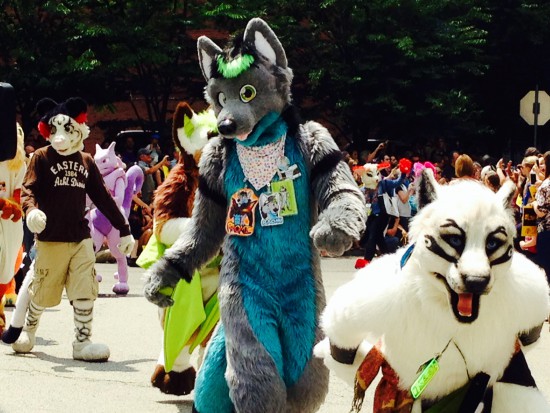 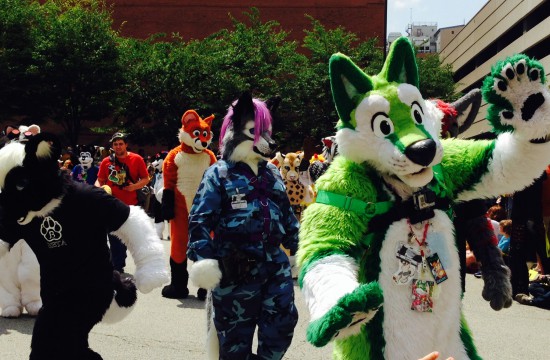 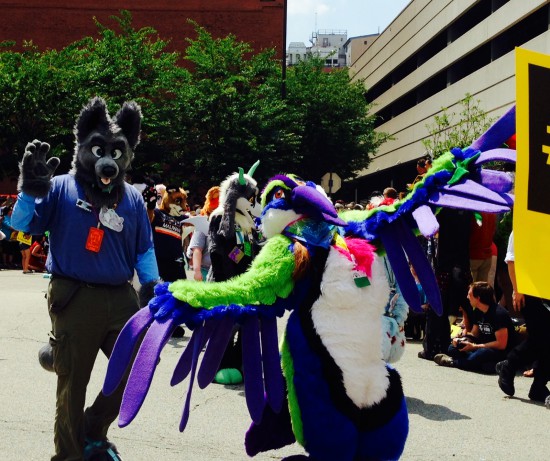 Thinking about “What’s the appeal of being a Furry?”, many say it’s the friendships and camaraderie.  But, I believe it is also the anonymity of being a lovable, fuzzy creature.  As such, a person can interface with others in a more friendly and overt manner, even with total strangers.  One can actually be more human and act with more accepting grace as an “animal”, not bowing to the social mores of keeping a respectfully distance from others, especially those one does not know.  Even as a photographer of Furries, I interacted with more unabashed freedom, unafraid of asking “May I take your picture?” to total strangers.  It is a freeing experience and truly the “Bunny Planet”.

Pondering this weekend’s Furry festivities, I must say I am very proud to live in the city of Pittsburgh where the Furries are welcomed and celebrated, ever since 2006. Sure, they bring in cha-ching to the city.  And, they donate to the Western Pennsylvania Humane Society as the  2015 beneficiary.  But, we yinzers are a what-you-see-is-what-you get kinda people. We don’t judge and don’t care what people think of us.  We just wanna have fun.  I think the Furries just wanna have fun too.  I have found the Furries to be gracious, polite and kind.  I like them.  And, they like Mama! 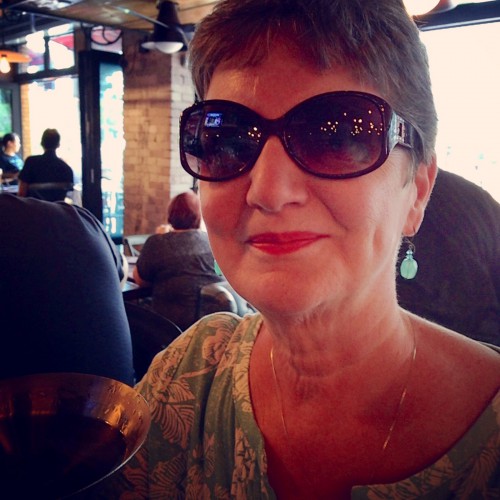 2 thoughts on “Mama Does The Furry Convention…Well, From A Bar Across The Street”