*Bang!* *BOOM* *tsssssssss* OH MY GOD! WHAT IS THAT?!! IS THAT A BOMB?! OR A BOX OF BOOM SQUAD?! Why are those explosions so close to my rattling windows? Why do they look like they’re being set off beside the NYPD precinct? Is my roof on fire?

Quick! I need to grab all my Lana Del Rey merch and run!

What? It’s just another discount firework display bought from the back of a mysterious van, culled from countless canceled local Independence Day festivities? Phew…yet another close call, dearest patriotic Filthy Dreams readers. I don’t know about you, but with night after night of endless grand finales, I’m feeling pretty jumpy this Fourth of July.

That’s right, our little national anthems, it’s that time of year again. And this Fourth feels a little harder to celebrate, doesn’t it? It’s a challenge to barbecue our way through a tribute to the founding fathers as we’re watching the country unravel spectacularly before our very eyes. Between the reimagined fireworks, surging COVID-19 cases all around the country, Karen’s going berserk in the aisles of Trader Joe’s, hurling their frozen Orange Chicken and tubs of Cookie Butter at their oppressors–people suggesting they don the ultimate symbol of tyranny, the mask, and our society attempting to come to terms with centuries of white supremacy by, well, doing almost anything else but defunding the police, this Independence Day feels distinct. You know, like it could be our last!

And of course, we need to give a special stars and stripes shout-out to the MVPs of American exceptional stupidity: Mark and Patricia McCloskey. While you might not know them by name, you certainly must recognize these gin-eyed, gun-toting firecrackers by sight! 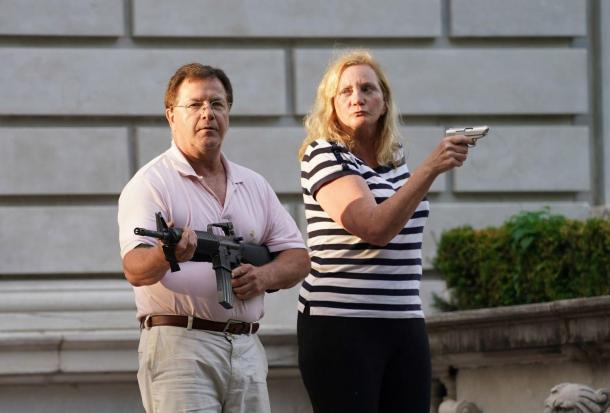 Like a super-sized Value Meal version of Bonnie and Clyde, these two have haunted me ever since their debut in front of their gaudy mansion. I don’t know if it’s Mark’s automatic weapon or Patricia’s dainty lady pistol, coupled with the mustard stain on her shirt, but these two are definitely in the running for the Filthiest People Alive!

Now, I know some downers are balking at making any wanton displays of Fourth fervor this year. But bad taste has never slowed us down before. Why, we’ve always celebrated everything wrong with America! And this year is giving us more opportunities to cackle and recoil in horror than most. I’m not saying I want to pay tribute to those old has-beens like paint-splattered George W. (the original George) or slur and spread COVID-19 at Mount Rushmore like Typhoid Mary Trump.

But, why not commemorate America as depicted in grainy footage of Elvis, JonBenét Ramsey, beaches, hot rods, Vegas, and heart-shaped glasses like a hostage video of the lost essence of the American imaginary held for ransom? Of course, I’m talking about the visual output of a one Miss Lizzy Grant.

Lizzy, who? Well, for those of you who don’t know, Lizzy Grant is the pseudonym for our Lord and Savior, our blessed mother and patron Saint of the beaches, peaches, red party dresses, and being pretty when you cry, Lana Del Rey. Okay, okay–Lana is really the pseudonym for Lizzy (as was Sparkle Jump Rope Queen and May Jailer). But who can really tell anymore? Before dyeing her hair a darker shade of brown and transforming into the bee-stung lipped, narcotic Bobbie Gentry chanteuse, icon of the West Coast and the open road, Lizzy Grant was the bleach-singed, born-to-be-cheap Lolita, Queen of the Gas Station and Coney Island.

While we’ve honored Lana Americana for previous Fourth of July’s here at Filthy Dreams, 2020 is Lizzy’s year. I’ll admit, I recently fell headfirst into an obsession with Lizzy after wide-eyed perusing some Grant-dedicated Instagram accounts. I mean, just look at this photograph: 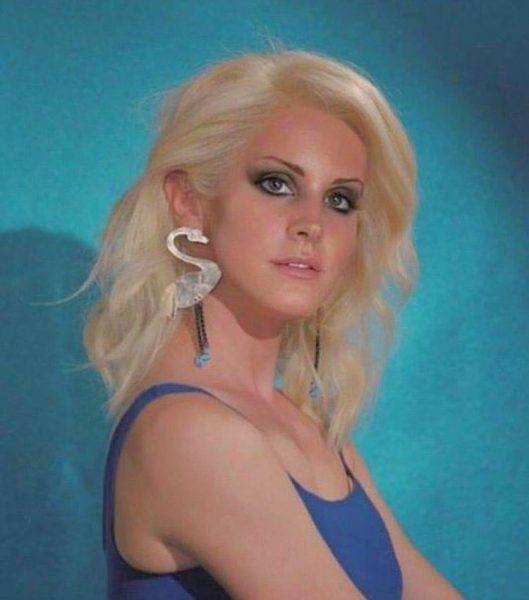 What in the Sears photo studio heaven is this?! Where did she get those flamingo earrings? How does a New York girl exude so much Florida energy? She looks as if she wandered into a graduation photo shoot after getting her makeup done at a counter at JC Penney. I’m in love.

By perusing her @MissDaytona account, you can also pinpoint the seedlings of what would become Lana’s enigmatic creative output, including a reference to “Ultraviolence,” which she would return to five years later:

Ruby Tuesdays or Mobil, I love you then i Love you still, you trust me not cause looks can kill. But I love your ultraviolence.

This tweet reveals just one of the reasons why I find Lizzy Grant so fascinating: her songwriting and music is unmistakably imbued with the same Americana fantasy that she would later perfect, but it’s half-baked and off-kilter. Before her breakthrough album Born To Die, Lana/Lizzy released a full album under the name Lana Del Ray AKA Lizzy Grant, as well as several earlier EP’s as Lizzy, including Kill Kill. But, the division between Lizzy Grant and Lana Del Rey is not so hard and fast.

Some of her songs such as “Yayo” appear on both the self-titled debut album and rerecorded on her later Paradise E.P. as Lana Del Rey. Similarly, lyrics also get resurrected on later albums such as the “lights, camera, acción” in her song “Put Me In A Movie,” which echoes on Honeymoon‘s “High By The Beach.” Even in the tracks that didn’t make it to the fully realized Lana Del Rey era, she still explores Americana with songs like “Oh Say Can You See,” as well as “Mermaid Motel” (“Maybe we could go to Coney Island/Maybe I could sing the national anthem/Buy a white sweater for the last white day of the summer”) or “Gramma (Blue Ribbon Sparkler Trailer Heaven)” (“A-M-E-R-I-C-A/ All I want to do is play”).

Unlike Lana, though, these releases aren’t polished–she’s still the singer with the babydoll voice anxiously and awkwardly whispering through her set in Lower Manhattan clubs. But, while Lana Del Rey is the woman who would find success, Lizzy, with her wonky aesthetic that is a mix of True Romance, Wild At Heart, Kill Bill, and Cry Baby, was the one to help her get there. Bless her frazzled, burned-out platinum blonde heart!

However, there’s an essential difference between Lana and Lizzy’s imagined America. With certain exceptions, including her stint with the bikers in “Ride” and dancing on the pole in “Gods and Monsters,” Lana Del Rey exudes wealth and rich lady energy–Priscilla Presley, Jackie O., Hollywood, Sunset Strip, Chateau Marmont, and Bel Air, though she continually mines the dark side of living in this lap of luxury. Conversely, Lizzy is, well, white trash. She’s living in the Manhattan Mobile Home Park in New Jersey, singing about how she’s in love with a dying man. She’s gas station Slurpees, fake flower gardens, motels on Neptune Avenue, and living on bread and oranges with the “Pawn Shop Blues.”

Even more than her albums, though, I’m fixated on Lizzy/Lana’s self-made music videos. Straddling the period between Lizzy and Lana, these videos splice in footage of Lana/Lizzy singing in a plethora of Party City wigs, adorned with Dollar General flower crowns, and dancing in front of her venetian blinds, wrapped in an American flag, with found footage of Americana. While similar to the video for “Video Games” that would finally land her widespread attention, these earlier homemade videos are done much more haphazardly. With their blurry quality and Lizzy/Lana’s strange, cherry pie-eyed, eager expressions, these eerie videos seem like something that should be FOUND rather than released, like a VHS dug out of a box at a crime scene. They’re sincere, doomed, desperate, and a little dangerous.

Admittedly, each video is somewhat interchangeable, each surrendering to the same cut-up format. Overall, though, they make quite a red-white-and-blue impact. With her wide grin dancing in front of the camera, alone, she seems like someone completely lost inside her own fantasies, which are all located in some deranged American paradise. In fact, these videos seem like the perfect alienated and alienating videos for our socially distanced Fourth of July in 2020. So kick back, drink some Jim Beam or Diet Mountain Dew (or both!), and let’s celebrate the founding of America by watching the founding of Lana Del Rey:

“I am the trailer park, darling,” Lana/Lizzy sings in “Hundred Dollar Bill.” And this video, which deserves its own special recognition here, shows exactly why. An interview with Lizzy in the Manhattan Mobile Home Park trailer park in which she previously lived (before moving back to New York City…because the rent got too high), this video is deliciously and sweetly bonkers as Lizzy/Lana wanders around with her little platinum bouffant. She gushes about her love for the trailer park, shows off some of her neighbors’ properties (including one covered in police tape, which she initially doesn’t notice), and pets a wandering cat. All 18-plus minutes are worth watching as she dreams about creating music videos with David Lynch and John Waters (our preeminent Filthy Dreams role models), reminisces about getting dressed-up for 7-Eleven, and describes her flower garden, which was full of fake flowers.

What comes out in this video is her sheer and overwhelming sincerity. She ADORED living in this trailer park. While the sardonic New Yorker interviewing her keeps snarking about crime, New Jersey, and trailers, Lizzy/Lana keeps guilelessly asserting how much she loves it. “I know the trailer has a…special place in America,” the interviewer pries. “It does. It does in my heart as well,” Lizzy replies. Awwww…