Last week, Vanity Fair published “Andy Warhol and Edie Sedgwick: A Brief, White-Hot and Totally Doomed Romance,” a rambling yet nostalgic look into Andy and Edie’s short-lived mutual obsession. Comparing Andy and Edie to, at once, Marilyn Monroe and Romeo and Juliet, the article is a lot, but it also managed to rekindle my fascination with the duo’s strange mirroring of one another, as Edie transformed from a Cambridge brunette into a shorn-locked, silver-haired, amphetamine queen. As Warhol described in The Philosophy of Andy Warhol: From A To B and Back Again, “One person in the 1960s fascinated me more than anybody I had ever known. And the fascination I experienced was probably very close to a certain kind of love” (27).

If that quote feels familiar–a flashback flickering across a screen, then you may have made the same mistake I did stumbling into a theater over ten years ago. That quote opens the tragically terrible Andy and Edie film Factory Girl. Reminded of the film, I revisited it on a cold snowy Saturday night as I was hiding from the roving bands of bros and their screaming lady friends as they marched through my neighborhood for SantaCon. Rather than dodging vomit propelled from a hammered reindeer, I wanted to see how the film aged. Not well. 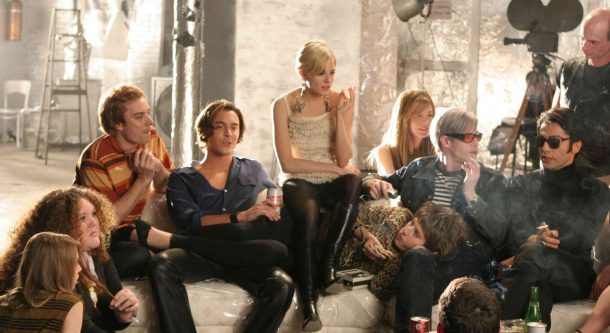 It should be said that most art-related films are pretty awful. Sure, there are some notable exceptions (mostly Frida, Caravaggio and Francis Bacon’s obsession with trade in Love Is The Devil has a certain campy charm). But in general, the ins-and-outs of the art world and artistic creation aren’t quite ready for their close-up. However, between the ham-fisted acting, the laughably lame script and the bizarre casting choices, I wondered, over ten years from its release, is Factory Girl still the worst art-related film ever made?

If you don’t feel like reading further, the answer is yes.

Directed by George Hickenlooper, Factory Girl depicts Sedgwick, played by Sienna Miller, as a little girl lost, dragged to the dark side by all those drug-addled queers as Warhol’s Silver Factory. Granted, this isn’t a new angle on the Sedgwick story. Ever since Jean Stein and George Plimpton’s Edie: An American Girl, Warhol has been blamed for Edie’s descent into drugs and her tragic overdose at 28. Casting Warhol as this vampiric figure (Drella as some at the Factory would call him–a combination of Dracula and Cinderella), it’s often assumed that Warhol sucked the life right out of these charismatic yet unstable souls, only to leave them dried out husks of their former selves as he tossed them aside for his next “Girl of the Year.”

Certainly some of this might be true, but I’ve always thought it was unfair. There’s no question that Edie was troubled and possibly doomed. When someone is hell-bent on spiraling out of control, it’s impossible to stop them, even if you are Andy Warhol. Factory Girl takes this tired representation of Warhol one step further by playing into the assumption that the queers, drag queens and other degenerates at the Factory were a corrupting presence in the life of that poor little rich girl.

However, before we get into the homophobic depiction of the Factory, the first place the film seems to have gone off the rails is the casting. It’s as if they grabbed a random group of people dressed as the Factory denizens for Halloween and shoved them in front of a camera. Sienna Miller plays Edie with a bizarre quasi-British accent that seems to change depending on the scene. Just try to watch her version of Poor Little Rich Girl without cringing–you can’t, it’s impossible.

And this is unforgivable. Edie was an electrifying presence–a stunning beauty whose fragility was as palpable as it was mesmerizing. Even when staring blankly into the camera’s lens for a screentest, Edie is engrossing. As Andy wrote of Edie (hidden under the pseudonym of Taxi) in The Philosophy of Andy Warhol: From A To B and Back Again, “She had a poignantly vacant, vulnerable quality that made her a reflection of everybody’s private fantasies. Taxi could be anything you wanted her to be – a little girl, a woman, intelligent, dumb, rich, poor – anything. She was a wonderful, beautiful blank.  The mystique to end all mystiques.” Miller, sadly, has none of that natural charm. And on some level, it’s not her fault. Much of Edie’s presence came from the fact that it looked as if she could break apart at any second. Anyone with a touch of emotional stability can’t keep up with that act. 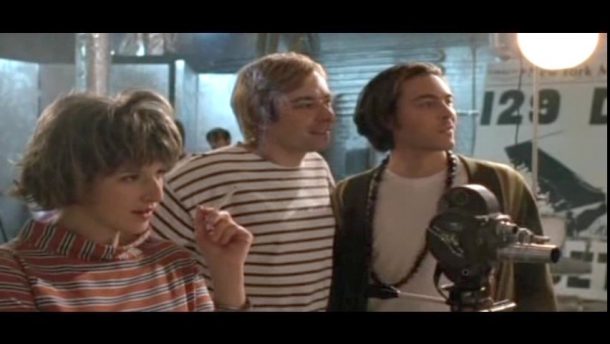 But, some of the lesser characters are even worse. Why, for example, is Jimmy Fallon in this film? The late night talk show host plays Edie’s Cambridge friend Chuck Wein who would go on to manipulate her from off-screen in Warhol’s infamous Beauty No. 2. In Factory Girl, Sedgwick, in voice-over, describes Wein as “a flamboyant socialite who carried a pocket of calling cards.” Cut to milquetoast Jimmy Fallon wandering around looking all dull as dirt. Who thought that was a good idea?

Even those chatty hopped-up Factory members Ondine and Brigid Polk (Berlin) are snoozefests in the film. But the worst offense has to be what they did to Nico, turning that robotic femme fatale into a dead-eyed mannequin. The horror! Not even a random appearance of Mary-Kate Olsen, in her 2007 prime Venti coffee-drinking, dinner plate-sized sunglasses-wearing phase, could make this film any better. 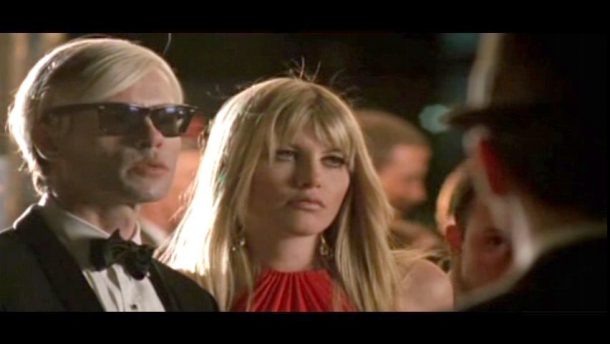 The script, too, penned by Captain Mauzner gives me a serious case of secondhand embarrassment. Most of the Warhol crowd shuddered at the film including the always-grumpy Lou Reed who pithily said, “I read that script. It’s one of the most disgusting, foul things I’ve seen – by any illiterate retard – in a long time.” Harsh, but not wrong.

Edie: “And what would I have to do in one of your movies?
Andy: “Just be yourself.
Edie: “Well, which one?”

So deep, so profound.

The worst offense, though, is the tension the film sets up between Guy Pearce’s Warhol, as the cold-hearted mincing queen, and Hayden Christensen’s masculine Billy Quinn, a deeply bad portrayal of Bob Dylan (who actually threatened to sue the film).

Now, Warhol is almost impossible to capture on a film in a way that doesn’t seem like a gross caricature. Even David Bowie struggled to do it in Basquiat and he knew the guy. Pearce’s interpretation of Warhol isn’t necessarily the problem per se, but it’s the scenarios he gets put into that just up the homophobic ante, rendering Warhol’s portrayal a gay minstrel show.

The first time we see Warhol it’s at confession, obviously, because all queers must repent. Sure, Warhol was a lifelong Catholic but I doubt he rambled this at a priest: “I have this friend Mark. Well, he buys all these clothes from Bloomingdale’s. But because he’s from London, everybody on the Cape keeps talking about his ‘fabulous English look,’ which really is so good. He was at a party up there last weekend and Norman Mailer walked up and punched him in the stomach. When Mark asked him why, he just said it was ‘for wearing a pink coat.’ I know I should have been happy for Mark that Norman Mailer punched him, but all I could think was, ‘Will Norman Mailer ever punch me?’ The priest then asks, “Andy, why do you come to confession?” I’m at a loss too, honey!

When he’s not boring the priest with gossipy details or speaking Polish to his overbearing mother, Warhol is either exploiting Edie or talking about Mick Jagger’s cock to anyone that will listen. Warhol seems just on the edge of perversion in the film. At one point, he answers an interviewer’s question about about the presumption that his films are pornographic by cooing, “Isn’t that greeeeeeat?” However, in actual interviews with Warhol, he seems to have denied the pornographic nature of his films-or at least, coyly deflected rather than reveling in it. For example, in “Andy Warhol’s Life, Loves, Art and Wavemaking” in the Chicago Sun-Times, published in 1975, interviewer Bess Winakor asked Warhol, “Why, after your asexual paintings or commercial objects, did you go into films that some people say are pornographic?” Warhol responded, “They weren’t actually pornographic. They’re comedies. Sex wasn’t the most important thing in the movies. People made up their own lines” (225).

This depiction of Warhol becomes even more egregious once the film introduces Billy Quinn, the literal straight man. Where Warhol is pale, fey and femme in his leather jackets and silver wig, Quinn is firmly heterosexual. He wears plaid! He drinks beer! He rides a motorcycle! He says lines like, “Whole world’s burning up and this cat’s making…gods out of garbage,” “Got the whole world on a string, don’t you? But inside, well, it’s as empty as your friend’s soup can,” and “Lady, you don’t know shit about shit.” He’s also an eye roll-inducing anti-capitalist who hilariously sends his motorcycle sailing into a lake just to prove how anti-consumerist he is. Power to the people!!!

Thank god, a straight man appears part way through the film to save Edie from all those malicious queens. It shouldn’t go unnoticed that Factory Girl was a Weinstein production, which now adds a certain creep factor to the significant power placed on heterosexual relationships in the film at the expense of the queer figures of the Factory. For example, the film forces an awkward sex scene between Edie and Quinn to make sure to emphasize how important heterosexuality is to this film. It should be said that Dylan vehemently denies having a relationship with Edie, though his friend Bob Neuwirth dated her. But a non-famous yet historically accurate sex scene wouldn’t be as titillating, I guess.

As Warhol plays the role of the seething jealous queen, Edie has absolutely no agency as she’s batted around from Warhol to Quinn and back again. Eventually as her health deteriorates and she wastes away into a frantic, psychotic ragamuffin, Warhol abandons her. The last we see of Quinn in the film, he’s discussing trying to help Edie, while the final scene of Warhol is in an interview in 1972, a day after Edie’s death. Denying he ever really knew her, he says, “You know, it was just so long ago. I mean, I hardly knew her at all, so…” It’s basically a 1970s version of this GIF:

In “A Very Nasty Portrait of the Artist: How Factory Girl Insults Andy Warhol” for Slate, Jim Lewis articulates, “I realized at once that I wasn’t watching a film about Andy and Edie at all; I was watching an allegory of the Evil Fag, who battles with the Good Man for the soul of the Lost Girl. The Evil Fag, you see, is simply a failed heterosexual, frustrated and rancorous; the Lost Girl is well-meaning but confused; and the Good Man does his best to set her straight.”

He goes on to say, “The visual arts have traditionally been a refuge for marginal people: queers and misfits, fragile and disobedient people, the flamboyant and the terminally shy, some brilliant people, some shallow people, and quite a few con artists; and Warhol’s Factory was open to all of them. There’s a great deal more to art than that, of course; there’s hard work and scholarship and as much to think about as there is in poetry or novels or philosophy. But many of us first came to the art world because decades earlier Warhol had made it seem like a wonderful place to be, and besides that, a home. So Factory Girl isn’t just a bad movie, it’s a 90-minute insult to the culture it pretends to be capturing.”

And after more than ten years, I couldn’t have said it better myself.

Me running away from this film