“There is no before,” exclaims Flawless Sabrina, discussing the nuances of drag names in the beginning of the iconic 1968 drag documentary The Queen. For fellow queens, trans and gender non-conforming people and generally, anyone invested in queer history, it’s nearly impossible to imagine a before Flawless Sabrina.

Drag pioneer, mother and grandmother to numerous younger folk, documentary star, activist and artistic muse, Flawless Sabrina sadly passed away last Friday. However, as Laura Palmer might say, she is dead yet she lives–through her chosen queer family. I, unfortunately, never knew Flawless personally, but I saw her around at events and watched her speak on her role in Michelle Handelman’s transcendent film Irma Vep, the last breath, in which she starred alongside Zackary Drucker as Irma Vep and Musidora. Together, Flawless and Drucker, one of Flawless’s granddaughters, beautifully portrayed the connections of intergenerational queer kinship.

Performing drag as early as the 1950s, Flawless presented an essential and much-needed complication of the Stonewall as gay liberation narrative. Flawless was out and proud long before those bricks and shot glasses were tossed. As Chase Strangio writes in “’You’re the Boss, Applesauce’: How Flawless Sabrina Changed My Life” for Medium, “My life was made possible by Flawless and others who created the space for me to inhabit this body in this world.”

Even though Flawless remains an important figure in queer history, I’m aware that she is all-too-underrecognized. Some of you denizens of filth may have caught Flawless’s smoky-eyed stare peering from a poster of The Queen in Connie and Raymond Marble’s place in Pink Flamingos. And while less of a cult classic, the opening credits of Transparent employ some selected shimmering footage from The Queen’s pageant.

Born in Philadelphia in 1939, Flawless donned a gown for the first time in 1947 at 8-years old. She was inspired by her Aunt Bessie who, as Flawless recalled to OUT Magazine, “I liked that she dressed gaudy and I thought it was funny as hell.”

Later, she developed the–as she puts it in The Queen–“Bar Mitzvah mother” character of Flawless Sabrina. As she notes to The Village Voice, “Kermit says it’s not easy being green. Well, being a queen is flawless.” And boy, was she ever! While Flawless Sabrina’s mothering may have been a bit over-the-top on stage, it wasn’t too far from her maternal instincts with the other queens. There’s a reason she’s called “Mother Flawless Sabrina.”

Perhaps most notably, her support of other queens is linked to her organization of a national drag beauty pageant The Nationals, started in 1958. As she said to OUT Magazine, “We would take hotels, usually in the black section of town, and rent out the ballrooms. We would hang sheets as a canopy outside so people could get in and out of the building without being seen, even though they were in suits and ties when they came in.”

The 1967 Nationals are depicted in The Queen, which documents the frank conversations and enthusiastic performances of the contestants onstage, backstage and in hotel rooms. Chatting about sex changes, other gay family members and being out, The Queen allows for an insider glimpse into what it meant to be a drag queen in the late 1960s. It also is a product of its time with the queens dolled up in Swinging 60’s cat-eye makeup, nude lips and giant bouffant wigs.

“All drag queens want is love,” remarks Flawless in the film. This may have been true but that doesn’t help The Nationals avoid some tense moments. In one scene, a young Crystal LaBeija–yes that Crystal LaBeija–reads the pageant’s winner to filth. It’s actually terrifying.

And yet, The Nationals emerge as an important moment for drag performance–a drag competition organized by queer people for queer people rather than a minstrel show for weekend warrior straights. Even Warhol himself was a judge (and also helped raise money for the documentary). “I was just was like a cork in the ocean, and by serendipity became involved in something, which in retrospect looks like pioneering, but I don’t think it was anything of the sort. It was just cultural change, and I happened to be in the right place at the right time—or the wrong place at the wrong time, depending on your point of view,” reflects Flawless Sabrina to Elisabeth Sussman and Zackary Drucker. 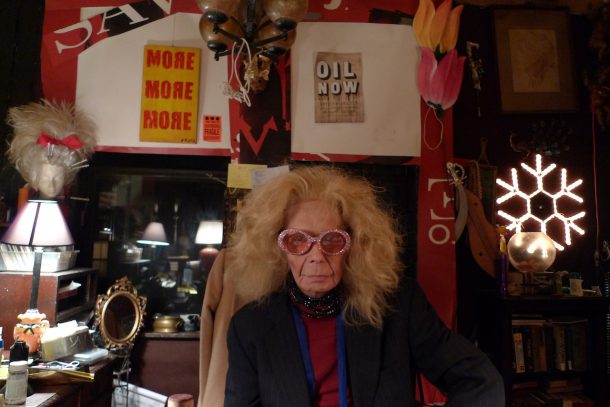 While Flawless may not have seen her work as pioneering, she certainly was always willing to put her body on the line for queer visibility. She was arrested over a hundred times for cross-dressing, which was, then, a felony. She was even arrested several times during the promotional tour for The Queen. Flawless explains to Drucker and Sussman, “I got a lot of felonies from doing the contests. Believe it or not, cross-dressing is probably still on the books in a lot of places. It was basically a man in a conservative dress would find me guilty of a felony for being in a gaudy one. It’s a strange sort of dynamic [All laughing] . . . It took me a very long time in my life to get over being angry all the time. I mean, really angry. . . . It just made me furious.  It not only seemed illogical; it was also so unkind. I didn’t go around pointing my finger at people, telling them how to live or what to do, or who to sleep with or how to dress. And I wasn’t teaching people to do that.”

After stepping away from The Nationals, Flawless’s life didn’t get any less interesting. “I don’t know where to start child…” says Flawless in a promotional video made by Dirty Looks. And it’s hard to know where to start when tracing Flawless’s life. Hugh Ryan writes in “Queen Sabrina, Flawless Mother” for VICE, “…she wended through the last fifty years of American history like a queer Forrest Gump, touching Edie Sedgwick and William Burroughs, Bobby Kennedy and Jackie O., L.A. in the 70s, Paris in the 80s, and New York always and forever.” She produced porn, consulted on films like Myra Breckenridge and Dog Day Afternoon, was photographed by Diane Arbus and volunteered for the (Hillary) Clinton campaign.

Recently, Drucker and writer Diana Tourjee began raising money ($20,000!) for the Flawless Sabrina Archive, preserving the treasure trove of queer historical materials in Flawless’s chock-full Upper East Side apartment. Hugh Ryan describes their motivation in VICE: “Creating the Flawless Sabrina Archive, they told me, was their way of saying thank you to someone who helped so many queer young people. It was also Drucker’s way of protecting Flawless, of mothering her own mother when disaster struck in the form of an eviction letter sent last summer. Flawless’s former boss Peyrefitte had died years before, and ownership of the property had reverted to a Swiss bank that wanted to bounce Flawless and up the rent.”

A hidden yet rich resource, the Archive includes such finds as a treatment for a talk show featuring John Waters, Divine and Flawless herself. Who ignored that pitch?! Shame on you! But above all, the Archive and Flawless’s life is a prime example of the courage to live however you damned well please. As Flawless often said, “You’re the boss, applesauce…It’s your life…Own it.”