Last week, the New Museum, in collaboration with Visual AIDS, hosted an engrossing and important panel ACT NOW: Perspectives on Contemporary Performance and HIV/AIDS, tackling questions about the role of performance and the artist’s body in preserving, discussing and embodying the history, legacy of the current AIDS crisis.

A thought-provoking and moving discussion, which highlighted the importance of performance to fill in the gaps where language fails, ACT NOW presented three artists, whose performances, despite their wide variation in work, all deal with the ongoing AIDS crisis.

The last in a series of panels, events and exhibitions commemorating the 25th anniversary of Visual AIDS (many of which we have covered here on Filthy Dreams), the panel featured Hunter Reynolds, one of my favorite performance artists whose physically exhausting work ranges from his Mummification performances to his alter-ego Patina du Prey, Julie Tolentino, a dancer and performance artist who is also notable for her founding of the Clit Club and her appearance as one of the kissers in the iconic Gran Fury poster “Kissing Doesn’t Kill,” and finally Justin Vivian Bond, singer and performer, perhaps best known as Kiki from the cabaret duo Kiki and Herb, as well as author of V’s own wonderful memoir, Tango: My Childhood Backwards.

Moderated by Professor Benjamin Shepard, who was oddly enough named one of 20 professors “who are reinventing the classroom” by Playboy, the panelists presented and discussed their work, focusing on their personal artistic development. Each artist’s personal relation to the AIDS crisis whether as someone who is HIV positive, a caretaker or a participant in a community that is being lost due to the disease, tremendously affected their artistic endeavors, forcing them to bring activism into their artistic process. 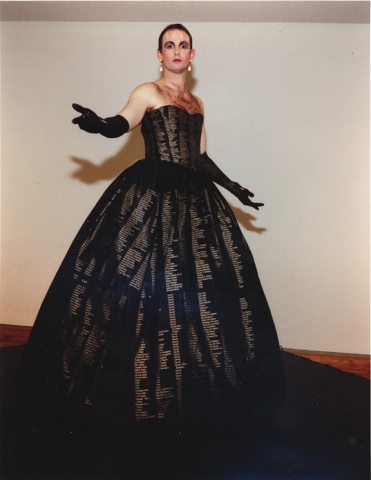 Beginning with Hunter Reynolds, his performance art career began as he attempted to bring activism into the art world as an active member of ACT-UP, as well as being HIV positive. Preferring to perform in the street rather than in white-walled galleries, Reynolds uses his own body to confront issues of gender identity, masculinity, HIV/AIDS and queer sexuality.

Perhaps Reynolds’s performance that most clearly discusses the losses of HIV/AIDS is his “Memorial Dress,” a beautiful black dress, which lists 35,000 names of people who died from complications of AIDS. Observing the drag culture in the East Village scene in clubs like the Limbo Lounge and the Pyramid Club, Reynolds wanted to find a way to, as he said, “address gender, removing my maleness.” Therefore, Reynolds developed his alter-ego Patina Du Prey, which allowed him to play with gender whether performing whirling dervish dances on the steps of the New York Public Library or slowly turning in the “Memorial Dress” in a gallery, making his body into a living sculpture as well as a living memory of those who died from AIDS.

Like Reynolds, Julie Tolentino also sought to merge her role in AIDS activism with her performances. For Tolentino, acting as a caretaker for many of her friends and loved ones who were dying from AIDS-related complications taught her about the importance of various touches on the body, which she then transferred to her performance art.

Related to her interest in touch, Tolentino’s performances highlight the importance of the body, its reactions and evolutions, particularly in relation to durational and endurance performances. Collaborating with extreme performance artist Ron Athey, as well as Stosh Fila otherwise known as Pigpen, Tolentino investigates intimacy, memory and the body’s movements and interactions.

The panel finished with Justin Vivian Bond, who, in addition to being hilarious throughout the entire panel, discussed V’s move to New York from San Francisco in 1994 after dealing with homophobia and transphobia in the acting world. Arriving in New York during the height of the AIDS crisis, Bond explained, “As I was finding a community, I was losing a community.” In order to carry the spirit of the people Bond lost personally, Bond developed the character Kiki, as a way to work through loss and some, decidedly drunken and a little unhinged, maternal impulses.

After the panel, I keep thinking about the failure of language to express experiences as complex as the ongoing AIDS crisis and the power of performance to represent the unspeakable through the body.

Since Derrida’s semantic deconstruction and before, theorists have been looking at the failure of language to capture true experience, particularly the experiences of alternative sexualities and genders. When language fails us, as it often does surrounding issues of HIV/AIDS from the difficulty in describing the enormous loss of loved ones, communities or just the enforced silence that surrounded the virus for a long time and unfortunately still continues to a lesser extent today. Even if you are from a younger generation and were lucky enough to not lose anyone personally to AIDS, how do you express loss of potential mentors, role models and people whose work was cut short and voices have been silenced. Despite all our best efforts, including mine, words are sometimes just not enough.

In the Psychic Life of Power: Theories in Subjection, Judith Butler (Oh yeah, I”m bringing in Butler. Suck it, haters) analyzes how the foreclosure of homosexuality in the formation of gender also forecloses a public language to mourn homosexual attachments. Butler’s conception of gender formation is related to Freud’s theory of melancholia, in which the lost object, in this case, homosexual desire is rejected and taken into the ego, which then presents itself as a gender identity.  With this form of identification, the possibility of homosexual attachments is rejected even before the oedipal conflict (135). Related to grief and loss, Butler reveals this rejection of homosexual attachments creates “a foreclosure of possibility which produces a domain of homosexuality understood as unlivable passion and ungrievable loss.” (Butler 135). Due to this formation of gender, Butler takes the idea of ungrievable loss to the societal level, which relates to the ability of performance to represent these moments of silences.

If the homosexual attachments are foreclosed from the start, the mourning of a homosexual loss, such as the incredible losses in the queer community from AIDS, would be beyond language or heteronormative culture in general.  Butler proposes that in this structure there is “no public recognition or discourse through which such a loss might be named and mourned” (139).

Butler even herself recognizes the specter of the AIDS crisis in this idea of the ungrievable loss.  She states, “this problematic is made all the more acute when we consider the ravages of AIDS, and the talk of finding a public occasion and language in which to grieve the seemingly endless number of deaths.” (138).  Butler highlights collective morning as a way to subvert these limitations, which could be understood as performance.

Perhaps the body could stand in as a site for collective mourning, as discussed by Butler. All of our bodies, no matter what gender, color, sexuality or other identity, bring a history–a history of that body and the similar bodies that came before us.

Looking at all the panelists work, Reynolds, Tolentino and Bond all use their own individual body to interject queerness into whatever space they are performing whether an art gallery, a nonprofit space, the street or a Broadway theater. As Tolentino stated in the discussion, “To be brown and queer onstage is already giving you something to work with.” By using their bodies–a HIV positive body, a queer brown body, a transgender body, each panelist creates an art that transcends language, boundaries and barriers, forcing their respective audiences to think, to remember, to confront, to learn or to share in their collective experiences.

One of my favorite (of many) quotes from David Wojnarowicz is, “I was losing myself in the language of his movements.” Watching clips of Reynolds, Tolentino and Bond’s performances, as well as witnessing them speak on their artistic practices, I felt myself getting lost in the language of their movements and perhaps that is the way to create a discussion around HIV/AIDS. Let’s all lose ourselves in the language of the artist’s body, transcending language and its silences.

2 thoughts on “Losing Ourselves In The Language Of Movements At ACT NOW: Perspectives on Contemporary Performance and HIV/AIDS”