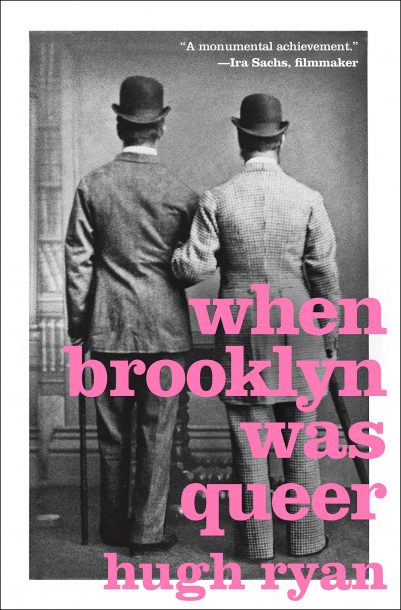 A young, fey sprite-like Truman Capote lounges, spread out on two ornate chairs, wielding a cigarette holder much like Holly Golightly from his Breakfast at Tiffany’s. Though Capote is at his most beautiful, not booze-bloated as his later years, he is somehow the least interesting thing in this photograph by Slim Aarons. The writer is surrounded by numerous enviable objects: lush red fabrics, darkly patterned wallpaper and I don’t even have to mention the kitschy cat tchotchkes. If I could only go back in time and steal one. It was here, in this basement apartment rented from set designer Oliver Smith, that Truman wrote some of his most famous works like the aforementioned short story and In Cold Blood. But more than this space as an incubator for literary genius, this room, as captured in the photograph, fascinates me as a prime example of queer aestheticism and decadence, set, not in Manhattan, but across the river in Brooklyn Heights.

This is the vision of queer Brooklyn I want to inhabit. The Brooklyn before it became an international brand, infecting other smaller cities with coffee shops full of old typewriters and repurposed wood, new American menus with $17 burgers, babies in bars, and a plethora of beards. One not populated with people with feathers in their hair who sing Lou Reed while their boyfriend plays guitar as in Lana Del Rey’s satirical ode to Brooklyn hipsterdom “Brooklyn Baby.” The Brooklyn visible in the photograph of Capote also works against hypermasculine stereotypes of Brooklyn, whether going hard in Notorious B.I.G.’s Bed-Stuy or Italian muscle men with their muscle cars. However, until now, there wasn’t much of a resource to seek out this Brooklyn.

Thankfully, Hugh Ryan’s When Brooklyn Was Queer, recently published by St. Martin’s Press, offers a much-needed page-turning corrective to both the primacy of Manhattan in LGBTQ histories and the largely hetero-history of the borough. The book traces a queer history of Brooklyn, from the transformative publication of Walt Whitman’s formative Leaves of Grass (as well as Whitman’s list of men he ran into while “covering the waterfront”) to the closing of the Brooklyn Navy Yards in 1966. Between these dates, Ryan takes readers on a journey from freak shows and bathhouses on Coney Islands to the artist commune February House at 7 Middagh Street, which boasted famed residents such as Carson McCullers, W.H. Auden, Gypsy Rose Lee, and Paul and Jane Bowles, to the freedom and community for queer women that came with the opportunity to work at the shipyards during World War II, as documented in the scrapbook by “welderette” Anne Moses. Ryan also depicts the over-a-century-long push-pull of the flourishing of queer expression and desires with subsequent policing and crackdowns, including perhaps my favorite scandal name “The Swastika Swishery,” a confusing shit-storm of accusations about Nazi spies, military men, a closeted, confirmed bachelor Senator, and a “house of assignation” at 329 Pacific Street.

This unearthing of a long-forgotten and ignored history is very much in line with George Chauncey’s seminal Gay New York. However, unlike Chauncey’s tome (and I’m very aware this is sacrilege to say among queer scholars), Ryan’s book is much more readable and therefore, accessible to the average reader. It’s a history text that is, dare I say, enjoyable to read, as Ryan peppers his deft scholarly analysis with pointed, sometimes amusing descriptions and occasional sly asides. Far from taking away from this historical rigor, it just makes it a book I looked forward to picking up. Take, for example, Ryan’s description of the frontispiece of Whitman’s Leaves of Grass: “His demeanor has the air of a provocateur, as though he were about to cock an eyebrow and ask, ‘Well?’” It’s a perfectly witty and spot-on observation of the young Whitman’s jaunty pose, but also one that I can see inspiring some serious historian pearl-clutching. Good. Bores. 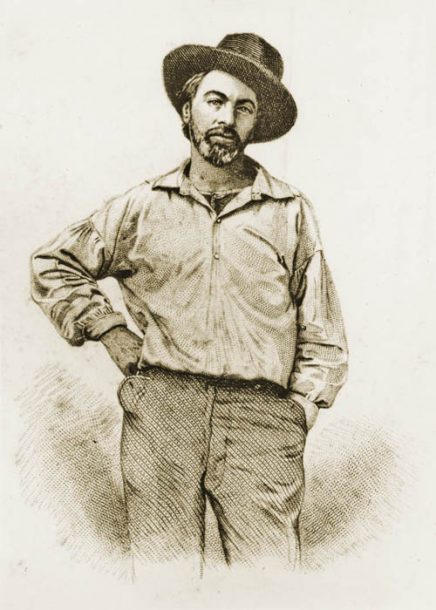 Engraved frontispiece of Whitman in Leaves of Grass

More than a mere history of one borough, though, When Brooklyn Was Queer also has several meta-narratives that serve to further cement the book’s importance, including the exploration of the development and hardening of the boundaries of both homosexuality and heterosexuality as concrete, immutable identities. In the earliest years covered in the book, same-sex attraction was more linked to gender presentation than sexual identity. As Ryan writes, “For most of the nineteenth and early twentieth centuries, being gender variant was the primary marker of sexual difference, and the actual sexual history of a man or woman mattered less than how well he or she conformed to an idea of masculinity or femininity.” This is perhaps best seen in “Boston marriages,” decidedly queer relationships between middle-class and upper class white women in Victorian society, which were accepted as long as both women presented as typically feminine. In fact, same-sex attraction was seen as, Ryan explains, “a disorder of gender, closer to what we today think of as ‘being transgender’ than ‘being gay.’”

Into the 20th century, particularly post-Prohibition and with the onset of the movie code, homosexuality, along with heterosexuality, become more and more defined as queers became more visible and thus, the subject of fascination, study and policing by the legal system, lawmakers, psychiatrists, sexologists, and other scientists. Now, confronting this continually changing definition of homosexuality, as well as its early relationship to trans and gender-nonconforming presentation throughout the late 19th and 20th centuries, from the perspective of 2019 shakes the foundations of both our current easily-consumable identity politics-based neoliberalism and the linear notion of progress altogether (which, of course, has always been a fallacy). Readers can either choose to see this destabilization of identity categories, and their connection to state-power and biopower, grounded in historical fact, as threatening or completely thrilling. Of course, I’m in the latter category as this bestows an opening up of possibilities beyond labels in the way “queer” was originally intended.

Another authorial decision that makes When Brooklyn Was Queer so exhilarating is that Ryan goes beyond the overarching narratives of queer populations in Brooklyn to spend a remarkable amount of time on the lives on individual people, beginning with Whitman and Mary Hallock Foote, whose letters to Helena de Kay Gilder revealed the first evidence of the lives and romances of queer women after the Civil War. And Ryan doesn’t just stick with the famous figures like Hart Crane or W. H. Auden (though I was excited to learn Auden frequented an establishment called the Bucket of Blood, a name of which should be familiar to anyone who has listened to Nick Cave & The Bad Seeds’s version of “Stagger Lee”). Some of the most thrilling inclusions, such as trans sex worker Loop-the-Loop or Black drag king Florence Hines, were unknown to me, which shouldn’t be too surprising since dominant history has long ignored the lives, accomplishments and presence of queers, particularly trans people, queer women and people of color.

My personal favorite newfound hero, however, is Rusty Brown, a woman who worked in the Navy Yard during World War II. After the war, she wasn’t satisfied to conform to the post-war return to conservative family values with women stuck in the home. Instead, she dressed in drag, donned her grandfather’s name, and passed as a 16-year old boy to work in civilian factories in Brooklyn. Eventually, recognizing drag kinging could be a career, she began to perform in Coney Island “doing a take-off on Ginger Rogers and Fred Astaire,” where she would meet the lover of her life Terry who danced at Madam Tirza’s Wine Bath. If Brown isn’t a role model, I don’t know who is.

By choosing to focus on these figures, Ryan, at once, humanizes this history, forging a genealogy of queerness through lives lived rather than numbers in public record, as well as provides any number of role models to choose from like Rusty Brown. Since so much of engaging with queer history also means tangling with the palpable absence of a clear, universally known lineage, this becomes especially significant. Through these figures, Ryan creates a, as Carolyn Dinshaw writes in Getting Medieval, “touch across time,” connecting today’s readers with previously unknown or lesser-known elders in the past. It is similar to the cross-temporal kinship that Tennessee Williams articulates in an unpublished poem found in his papers at the Harry Ransom Research Center, which sees the writer “drinking a solitary toast/To the greatest poet of all time, Hart Crane…” while staring at the Brooklyn Bridge. Citing Crane, along with Whitman and Poe as the “Unholy Trinity!” Williams writes, “But there was fellowship in you…” Likewise, Ryan also offers the potential discovery of numerous unexpected fellowships throughout the book.

While he fleshes out this queer history as much as he can, Ryan also doesn’t shy away from the sheer difficulty of penning a LGBTQ history book, as queer lives, narratives, and spaces are often left unrecorded, overlooked, or even, erased and destroyed. Ryan writes in the book’s introduction, “A queer moment in time fluoresces briefly, glows brightly, fades, and is forgotten. The further back you go, it seems, the briefer the shine. Without much in the way of community institutions or even social organizations to pass information around, queer life in Brooklyn, pre-Stonewall, was a many-splintered thing…Some days, it feels as if I’m trying to complete a jig-saw puzzle without knowing what the final picture will look like…”

In some parts of When Brooklyn Was Queer, these gaps in history are felt more palpably than others, particularly in communities of color, such as the Black neighborhood of Weeksville in the mid-1800s, which was only rediscovered by historians as late as 1960. And other times, the lack of firsthand recordings of queer experiences means turning to less desirable and certainly not neutral sources like the archives from doctors, antivice organizers and lawmakers whose goal was to study, categorize and monitor LGBTQ folks.

But rather than claiming comprehensivity, Ryan acknowledges that this book may only scratch the surface of what may have really happened in Brooklyn during these years. In fact, some of the most electrifying yet also tragic points in the book are the instances that gesture to a greater flourishing of queer lives just beyond the recorded page. For example, Loop-the-Loop, while discussing paying off cops, says flippantly, “We all do it.” This leads to the question who is this “we” ? This phrase clearly points to a community of trans and gender-nonconforming folks pervading Brooklyn in the early 20th century. With this moment and others, When Brooklyn Was Queer is as much about gaining a history as it is about grappling with what is lost and what is still unknowable.

In fact, queer history may always be “piecemeal and canonless,” as Ryan observes. As much as Ryan discovers in When Brooklyn Was Queer, it also is haunted by what is missing. The way this history may just evade our grasp is reminiscent of the book’s beginning, which describes famed burlesque dancer Gypsy Rose Lee and writer Carson McCullers running down the street in Brooklyn Heights on Thanksgiving 1940. Giggling to themselves, arm-in-arm, they remain just out of reach, painting a ghostly image of these two storied figures girlishly fleeing through a Brooklyn that no longer exists. Like them, this history is uncatchable, elusive, slippery, and yet, one that is worth running after.