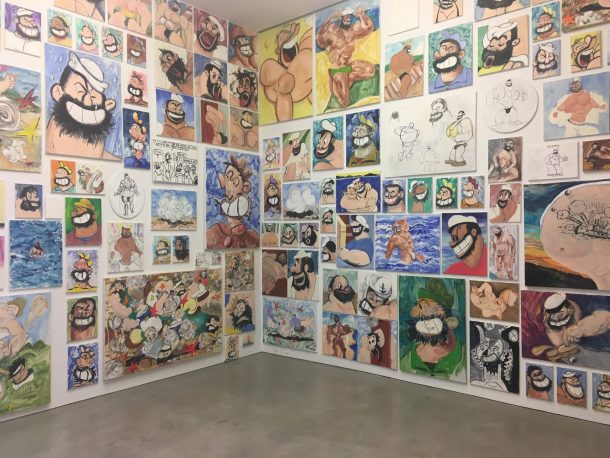 Why are animated villains always the queers? It’s not hard to create an extensive list: Scar, The Lion Queen, the Divine-inspired Ursula, Jafar, who certainly was more into shirtless vest-sporting Aladdin than Jasmine, and basically all the classic villainesses, from the Queen in Snow White to Sleeping Beauty’s Maleficent, who were some of the fishiest drag queens I’ve ever seen. And of course, this phenomena goes well beyond Disney. Just take Bluto from Popeye who first appeared in a comic in 1932 and a year later in the animated series. Sure, on the surface, Bluto is the picture of hetero-masculinity in all its beefed-up glory with his thick beard, wide torso, constantly punching fists and roid-rage. But, there was always something camp about Bluto as he preened and tried too damned hard to nail that he-man persona.

With this in mind, it’s not too much of a surprise that someone would eventually take up Bluto as an artistic subject, an object of affection, a character for critique, and an overwhelming and overpowering obsession. And that’s exactly what Erik Hanson does in his current exhibition Two Years of Bluto at Marlborough Contemporary’s Viewing Room, which seems to be home to some of the most thrilling exhibitions in Chelsea lately.

As the title suggests, the show is the culmination of two years of a fixation on Popeye’s nemesis and pursuer of that glam waif Olive Oyl. And, well, Hanson was certainly busy, as the exhibition features a staggering and shocking floor-to-ceiling painterly ode to Bluto. To call the exhibition salon-hung seems like a tepid description. Turning the corner from the main space’s astroturf-covered Beverly Pepper show with her giant Cor-Ten steel loops and entering into Hanson’s Bluto-covered world, I audibly gasped. It was four walls of Bluto overload, like being buried under an avalanche of Blutos, as well as Hanson’s whirlwind of diverse style and imagery. There is Bluto lying down on a bearskin rug like another famous hyper-masculine hunk Burt Reynolds, and Bluto in pink sunglasses and a floofy white jumpsuit à la Elton John. Repeated in several separate canvases are depictions of Bluto’s face framed like a cheesy mall glamour shot, his three large teeth gleaming seductively. Other pieces show Bluto beaten-up, with a black eye, and adorned with a crown like a fallen Greek god. In short, the exhibition is more like a devotional shrine than a typical art exhibition–a monument to monomania.

With its singular subject, Two Years of Bluto’s maddeningly repeated imagery not only mirrors the multiple frames in a comic or animated cells, but also exemplifies and encourages deeper consideration of what exactly Bluto means culturally, particularly in relation to queerness and masculinity. Hanson’s complex engagement with Bluto relates to the process José Esteban Muñoz describes in Disidentifications: “…rather, like a melancholic subject holding on to a lost object, the disidentify-ing subject works to hold on to this object and invest it with new life.” And Hanson certainly invests a new life into Bluto, wrestling with this figure over and over again.

In fact, Two Years of Bluto’s has more in common with fan art than probably Marlborough would like to admit. I don’t mean this as a slight. Like those fandom subcultures find their own, often queer, narratives in pop cultural imagery (that new life Muñoz mentions), Hanson’s constant entanglement with Bluto, through both its sheer volume and subject matter, transforms Bluto into the heroic, yet possibly problematic queer icon he always was. I mean, there’s even a portrait of Bluto surrounded by pansies. It doesn’t take much analysis to understand that symbolism. Similar to fan art, the series seems to be a private pursuit and drive to understand the weird attachment with this cartoonish figure, while also connecting with others that might also have a strange love for this brutish boy.

While this awe-inspiring appreciation for Bluto seems like something most viewers could interpret, the gallery forgoes a traditional press release for a dialogue between two academics David Getsy and Ramzi Fawaz. Entitled “Here You Come Again: Repetition and Fidelity in Erik Hanson’s Bluto,” this conversation could be considered a form of academic camp in just the sheer seriousness with which it’s taking paintings of scenes like Bluto on a pool raft in the ocean holding his dick. Whew! Describing Hanson’s series as a “queer struggle with deep psychic attachments,” the text is filled with so many academic buzzwords I couldn’t see straight. Who is this for? I love critical theory, but even I have limits.

So to avoid previously made pitfalls or dipping too far into academic babble, I’m most interested in how Hanson’s series, at once, foregrounds how Bluto’s particular style of hypermasculinity gels with what is still revered in today’s gay culture, and reveals it as completely ridiculous and (probably self-explanatorily) cartoonish. Hanson clearly depicts Bluto as the pinnacle of Macho Man masculinity, from standing with his exposed hairy chest in expressionistic ocean waves like a bear sea nymph or siren, or bending over coyly to pull up his gym socks with his reflection posed in a nearby mirror like a vintage pin-up. However, Hanson didn’t pull Bluto’s role as a masc symbol from nowhere. Just read this description from Bluto’s Wikipedia page: “a large, bearded, muscle-bound fellow … He mostly uses his physical brawn to accomplish what he is trying to do, but does display some ability for tactical planning. His voice is very loud, harsh and deep, with an incomprehensible bear-like growl between words and sentences.” Is this also his Scruff profile?

Bluto, with his puffed-out pecs and flying fists, does have an erotic power in Hanson’s paintings, one that is familiar and heavily romanticized in gay culture, both historically and in the present. There’s a plethora of references that echo Bluto’s form, whether in magazines like Bob Mizer’s Physique Pictorial or Tom of Finland’s illustrations. In fact, Bluto’s wide-torso, small-hipped form is almost exactly like the seminal figures that populate Tom of Finland’s leathermen and sailor-filled landscapes. But this fetishization of a certain type of masculine performance isn’t only relegated to the past. Everywhere you look for today’s ideal male bodies, you’ll find Bluto too. I think immediately of Casey Spooner’s mustachioed 70’s throwback from Fischerspooner’s recent album SIR. Hanson even goes on to emphasize this by painting some recognizable figures like Thierry Mugler as Bluto.

Most of Hanson’s Bluto paintings portray him alone, as a tribute, but a few present renditions of Popeye and Bluto fighting, represented by a cloud of dust and limbs. On his own blog, Hanson explains his fascination with Popeye and Bluto’s rivalry: “One of the strangest things about this cartoon is the violence. Popeye often becomes enraged when he sees Bluto, a professional bodybuilder in his skimpy posing briefs…is it jealousy? Maybe or could it be that Bluto brings up some feelings in Popeye that he is uncomfortable with?” Surrounded by more obviously homoerotic scenes, these paintings too display the desire that is also inherent in moments of violence. It’s akin to Barbara Kruger’s famous line: “You construct intricate rituals, which allow you to touch the skin of other men.” Though this can be dangerous, it also seems like an elaborate courting ritual, particularly in the context of the butthole paintings that pepper the wall like the tweeted testimonials for Azealia Banks’s Bussyboy soap.

Fawaz muses in the press release, I mean, published academic paper: “In these paintings, Hanson puts his finger on a sort of melancholic attachment that both gay men and the society at large have to the figure of hyper-masculinity–that ideal that both magnetizes our desire and constantly hurt us, reminding us we are never enough (never big enough, powerful enough, strong enough to be “real” men or desirable to those men who seemingly fit the ideal). We (both the particular subculture of gay men, but also a patriarchal culture as a whole) “love” men–some of us peruse them erotically, others symbolically or behaviorally worship at their imputed power–but that love is often exactly what undermines our own self-image, promotes rigid gender norms and reproduces patriarchy.” What Fawaz seems to miss here, though, is that, in Hanson’s hands, this seminal figure of hyper-masculinity becomes both ridiculous and obviously performed (he is drawn by a cartoonist). Bluto is barely a “real” man either–his mask of masculinity is quite fragile as the cartoons attest. Bluto has to pummel everyone into submission in order to maintain his thinly veiled facade, even dancing with another man, Popeye, in order to do it as in 1937’s short “Morning, Noon and Night Club.” However, despite this critique of masculinity and its continued sway, Hanson still represents Bluto as a beloved character to be desired, adored, and worshipped again and again.