“Now Orpheus, crawl, O shamefaced fugitive, crawl
back under the crumbling broken wall of yourself,
for you are not stars, sky-set in the shape of a lyre,
but the dust of those who have been dismembered by Furies!”
–Tennessee Williams “Orpheus Descending”

In his ongoing Q&A newsletter The Red Hand Files last week (#20 if y’all are keeping count), Nick Cave finally addressed the elephant in the room: The Bad Seeds’ objectively worst album Nocturama. Answering a series of questions best summed up by Faduma from Somalia’s submission who just wrote, “Nocturama! What the fuck?!!” Cave joked that the title of the album itself has become synonymous with abject failure. Though the album features stunningly stinker moments like the attempt to rhyme Gibraltar with Malta(-r) in “Rock of Gibraltar” or the excruciatingly exhausting nearly 15-minutes long banger “Babe, I’m On Fire,” Cave asserted that he actually likes this “sad, brave little record” not because of some ego-driven perceived hidden strength, but because of failure itself. “I like that it is out there, moving about the place and spoiling things,” Cave explains. “I like it that someone may accidentally play it at a party and people start throwing up in the ashtrays. I like it that everyone stands upwind from it.”

Admittedly, I’ve always loved the album for the very same reason. Artists of Cave’s caliber going out on a limb, experimenting, and failing miserably is often more inspirational to me than the successes (which is why I also love David Bowie’s song “Red Sails”). Isn’t failing better than playing it safe to remain praise-worthy?

Which brings me to Tennessee Williams’s (known around here at Filthy Dreams as TW) abominable paintings, which I saw recently in their permanent hang at the Key West Art and Historical Society’s the Custom House. After traveling to museums like the Ogden Museum of Southern Art in New Orleans, this small exhibition titled Tennessee Williams–The Playwright and the Painter featured fifteen paintings from the 1970s owned by fellow Keys’ resident David Wolkowsky, who was one of Williams’s close friends.

While some critics have reviewed the traveling show, I want to say what others haven’t dared to, out of sheer respect for TW’s heroic legacy. His paintings are, well, not good. Very bad. Terrible. Abysmal. His chosen colors are a nauseating pastel nightmare of Pepto-pinks, rusty reds, watery oranges and puke greens. Where did he even get these paints? His line work? Confusing. His portraiture? Bizarre. He also frequently left areas of his canvas blank as if to say, fuck it.

And I say this with absolute love because TW is one of my most treasured filth elders. I agree with John Waters, who writes in his book Role Models, “I yearned for a bad influence and boy, was Tennessee one in the best sense of the word: joyous, alarming sexually confusing and dangerously funny.” But even I know a bad painting when I see one and whew, boy! TW made a lot of them. 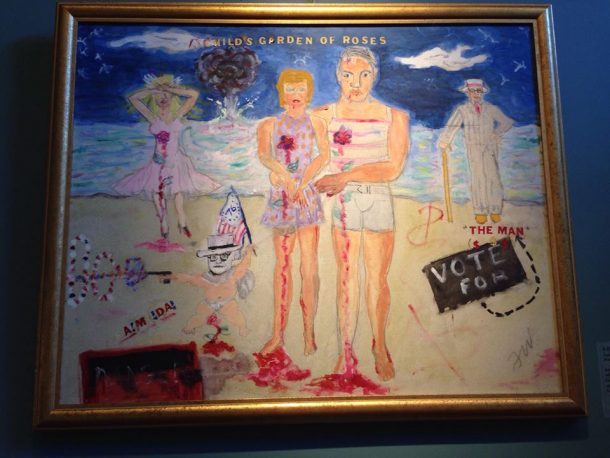 Tennessee Williams, A Child’s Garden of Roses, 1976, oil and pencil on canvas (photo by Mama)

TW painted subjects as wide ranging as devoted portraits of actors like Michael York (Atrocious!), unknown trade…I mean, suitors (Horrendous), literary inspirations (What are these?!) and even, references to his own writing (Oh, honey!). The one thing that seems to tie this diverse subject matter together, other than their horrible skill level, is their almost mortifying level of sincerity. There is, however, one exception that is perhaps my favorite: A Child’s Garden of Roses. In this blood-drenched beach scene, a baby with the head of squeaky voiced social climber Truman Capote runs amok with a pistol, ruining everyone’s good time. A spite-driven fever dream, this painting was completed in response to Capote’s cruel caricature of TW in his unfinished hit piece of a novel Answered Prayers. The novel portrays TW as the thinly veiled Mr. Wallace, a drunken and lecherous has-been, an ironic critique coming from Capote. Capote even goes so far to suggest Mr. Wallace would eventually burn to death passing out with a lit cigar “someday when no one is there to save him.” Ouch. Get him TW!!!

But other than revenge served on a canvas, TW’s paintings express a deep sincerity that, coupled with his lack of painterly skill, make his work just deliciously cringe-worthy. Take, for example, Coeur Violée, which is named after a Rimbaud poem and features a wide-eyed youth with his hair askew. Sitting on top of a giraffe-like neck that seems barely able to hold up his oblong head, this figure’s eyes are two different sizes below pencil-thin eyebrows, rivaling Drew Barrymore’s from the mid-1990s. His nostrils are also flecked with blue paint as if caught snorting Walter White’s famous blue meth. However, the face isn’t even the most inexplicable part of this painting. After finishing these detailed aspects, it’s as if TW lost interest, deciding to just quickly render a boxy rectangle for the figure’s shirt, leaving the blank canvas and flick some lines here and there for a background. Whatever. Done.

Rimbaud wasn’t the only writer that TW bestowed the great honor of a tribute (You shouldn’t have!). He also created his Homage à Genet, which is perhaps one of the most perplexing paintings I’ve ever seen. What is even going on here? Is this in a nightclub? Is that a break-dancer? A waterfront? A prison? What did poor Jean do to deserve this? However, I think I spy a sailor in the righthand corner so perhaps, Genet would be satisfied.

Much like Rimbaud and Genet, these two queer outsider figures, John Waters notes, “Tennessee never seemed ‘gayly correct’ even then, and sexual ambiguity and confusion were always made appealing and exciting in his work. ‘My type doesn’t know who I am,’ he stated according to legend, and even if the sex lives of his characters weren’t always healthy, they certainly seemed hearty. Tennessee Williams didn’t fit into his own minority so I had the confidence not to either. Gay was not enough.” TW’s paintings aren’t “gayly correct” either, particularly for the era in which they were made. Rather than the empowerment demanded by the 1970s gay liberation movement, TW’s paintings dwell on melodramatic, martyred and nearly religious scenes of queer pathos. I mean, TW even does his own take on St. Sebastian in Citizen of the World III, going so far as placing numbers in case you need to know where to strike the arrows.

But, St. Seb isn’t the only one suffering. In a painting entitled Lament for the Moths, TW illustrates the younger version of himself lying prone and nude. Named after his poem of the same title, which poses the deaths of fragile moths in an uncaring world (“Give them, O mother of moths and mother of men, / strength to enter the heavy world again,/ for delicate were the moths and badly wanted/ here in a world by mammoth figures haunted!”), TW renders himself as similarly crushed by the world. As David Roessel and Nicholas Moschovakis write in the introduction to their edited The Collected Poems of Tennessee Williams, “As much as Williams himself may have come to see past the prejudice that defines homosexuality as a pathology, it is a difficult and challenging truth that the tragic strain in representations of pre-liberation American queer identity was in some ways basic to his vision of human experience…For among other things, it supported his romantic view of himself as a suffering poet.”

Tennessee Williams, Lament for the Moths, 1978, oil on canvas (The Collection of David Wolkowsky and The Key West Art & Historical Society)

But all these questionable artistic choices are exactly why I love, to crib some description from Nick Cave, these “sad, brave little” paintings. They fit quite nicely into TW’s own notion of failure in his work, as well as his belief in creativity or the art life. According to Roessel and Moschovakis, “In a journal of 1940, Williams quizzically described his ‘oblique’ strategy for achieving greatness: that of pursuing ‘success through failure, failure through success.’” Williams, in his writing, seems to be, at once, fascinated, welcoming and terrified by failure. For instance, in his poem “Orpheus Descending,” TW chides Orpheus for his refusal of failure: “For you must learn, even you what we have learned,/that some things are marked by their nature to not be completed/ but only longed for and sought for a while and abandoned…” Failure, TW seems to tell Orpheus, might just be your style.

And perhaps, later in his life, TW also expressed this through his paintings’ failure in style. For failure can be admirable, as are TW’s paintings. It can even be significant, particularly now when so much of our society is based on material versions of success or approval by the right people. In this case, failure becomes a subversion of this system. Specifically in art when “good” work is defined by a handful of snobby blue-chip galleries, oligarch collectors or just sheer likes on social media platforms, failure can, as Jack Halberstam writes in The Queer Art of Failure, “stand in contrast to the grim scenarios of success…” 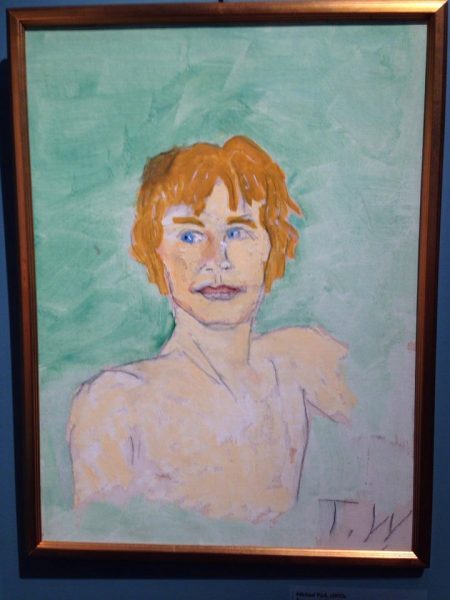 Ultimately, TW’s paintings, regardless of their quality, represent a refreshing creativity for creativity’s sake–a bold determination to make work, regardless if it’s terrible or not. TW seemed to enjoy making these paintings just for himself, painting in the afternoons on the porch of his house on Duncan Street in Key West, after spending his mornings writing. Though enjoyed by collectors, these paintings were a solitary passion, connected to his idea of Bohemia. As TW explains in his Memoirs, “My place in society, then and possibly always since then, has been in Bohemia. I love to visit the other side now and then, but on my social passport Bohemia is indelibly stamped, without regret on my part.”

Though in our hyper-gentrified, economically stratified times, as the gig economy has us all working all day, every day, Bohemia is long dead, creativity in and of itself as a purpose remains essential. As TW said in an interview with James Grissom in 1982, “Creativity alters everything, and I’m not speaking of pursuing professional work–I’m talking about everyone on the face of the planet embracing where their creative impulses take them, remove them from the grinding despair of what we call reality.”

So I’m glad these paintings are essentially TW’s Nocturamas, hanging in collectors’ homes and spoiling people’s appetites over dinner. “I think that in the end we all need our Nocturamas,” Cave asserts. “Your Nocturama may, indeed, be the most important thing you ever do. Failure fortifies us. It moves us forward. It strips everything back to its essential nature and leaves us clean and pure, ready to begin again.”