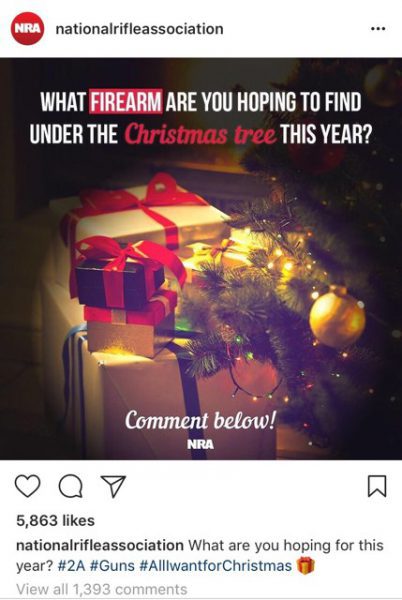 Why hello there, dearest Filthy Dreams readers! I know–it’s been another roller coaster week here in America as we were lucky enough to be reminded multiple times just how gross the National Rifle Association and their spokespeople are. From CNN’s Town Hall with the survivors of the shooting at Marjory Stoneman Douglas High School who got to confront Dana Loesch, NRA spokesperson and aspiring Disney villain, to Loesch and Wayne LaPierre’s conjoined crazy at CPAC, we got a double-dose of blood money batshittery this week.

While I don’t feel like I need to recount the events of the Town Hall or CPAC here on Filthy Dreams, what I do feel uniquely qualified to highlight is the conservative camp occurring on the NRA’s bonkers Instagram page. As a connoisseur of the trash aesthetic, the visuals on the NRA Instagram fall in line with the right’s current monopoly on bad taste (we need to take it back). Filled with gun nut memes and questionable hashtags such as #pewpew (seriously), I, in truth, had to double and then triple check that this was, in fact, the official NRA Instagram.

With posts boasting “Aromatherapy” with pictures of smoking guns to a heart-warming Mother’s Day post, featuring a mom showing her small child how to use a firearm, to text posts with phrases like “Sun’s Out Guns Out,” the NRA’s Instagram is shocking to even those of us, like me, who thought we were over being shocked. Of course, we already knew the NRA was dangerous and monstrous, but I didn’t know they were just so tacky and excessive!

Of course, the irony here is that stigmatizing mental health seems to be a talking point for the NRA in regards to school shootings. At CNN’s Town Hall, Loesch called the Parkland shooter “an insane monster” and “nuts.” Which is an interesting tactic considering just how off the rails the Instagram feed looks. I hope that whoever the social media intern is, they get a real detailed background check before purchasing any firearms.

Interestingly, but not surprisingly, the real trashy and threatening memes, like a photograph of a gun on a target with the phrase “Group Therapy,” appeared around the same time Trump emerged on the political stage. Starting their Instagram account in 2014, the earliest posts are more tempered with footage from gun shows and your expected 2nd amendment posts. The real alt-right-style memes ramped up when the Trump candidacy became a possibility and America decided to transform into Idiocracy.

Perhaps the worst of these posts are the ones that frame gun ownership as some sort of feminist issue. Scrolling through the feed, there are copious posts featuring “empowered” women wielding firearms. “No Victim Here!” reads one post with a determined-looking woman brandishing a gun. Another shows a pretty blonde white lady sleeping soundly with the phrase: “How I sleep when there’s a gun in my nightstand.” Ok, lady. Yikes.

The most stunning part of these Instagram posts may not even be the imagery or the bad faith feminism; it’s the hashtags. Like the aforementioned #pewpew, there’s also my personal favorite #gunsense. I assume they meant to play on common sense, but instead, it has the same syllables as nonsense. Whoops.

Now, because I do it all for you, faithful Filthy Dreams readers, I went through and culled some of the best of the worst batshit NRA Instagram posts so you don’t have to journey through that particular heart of darkness like I did. So lock, load and get ready for some gun nuttery:

And who says romance is dead

Nobody else is sleeping soundly, lady

Nothing more American than puppies and guns, amirite?

I missed this at Bath and Body Works

Nothing says class like a big 2nd amendment back tattoo

But what about the puckle gun, says nobody but Dana Loesch

Ah, yes, and here we have the ever-present FAKE NEWS meme

Really milking that one joke 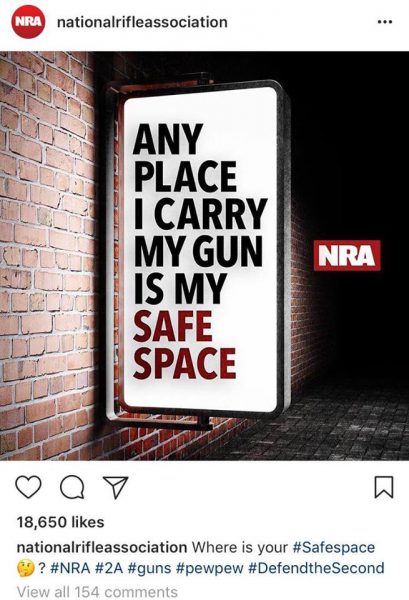 When I think safety, I imagine everyone packing heat

Mom must have been something

They’re really trying with this one.

And I thought I’d end with this image, just so cheery. It’s like the Jersey Shore, but with actual guns