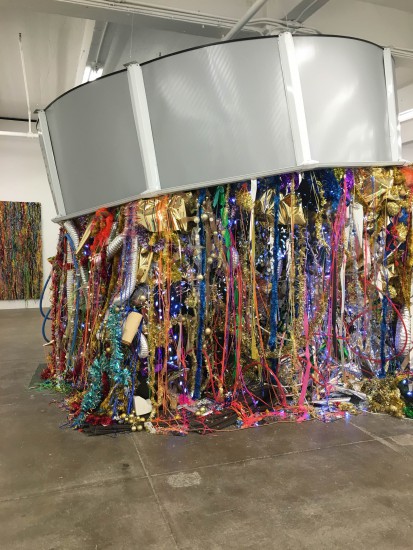 In Susan Sontag’s seminal, often quoted and equally maligned “Notes on ‘Camp,’” Sontag composes a list of examples of camp including Tiffany lamps, Swan Lake and “stag movies seen without lust.” While Sontag’s list is certainly limited, she surely would not have hesitated to include opulent lamps, gaudy glass chandeliers, shining streamers, clashing ribbons, dangling lights, disco balls and the other multitude of materials and imagery contained within artist Robert Melee’s current exhibition Semi-Quasi-Bower Recreational at Andrew Kreps Gallery.

From his series documenting the extravagant heights and failed idealism of Atlantic City through photographs of vacant and vacuous hotel lobbies and casinos to his engrossing and enormous installation Bower Pool, Melee’s Semi-Quasi-Bower Recreational explores the continued resonance and relevance of camp as a means of cultural and critical subversion.

Perhaps best known for his Whatever Happened To Baby Jane-esque photographic series with his mother, Melee is certainly no stranger to camp. However, rather than using people and their gestures–despite the depraved appearance of designer David Quinn in Portrait of Debs, Melee primarily creates a camp sensibility throughout the exhibition by sheer aesthetics alone.

With his deft, slightly demented and definitely hilarious choice in typically tossed-away materials, Melee proves that camp does not just require shrieking divas or snarking queens but can be constructed through sheer shocking eye-searing visual celebration of artificiality.

The central artwork in Semi-Quasi-Bower Recreational is Bower Pool, featuring an above-ground pool–certainly the trashiest of pool options–hanging upside down from the ceiling. Like an overturned bucket of disco leftovers, the pool spews multicolored streamers, garlands, Christmas lights, disco balls, party hats and other dangling decadent detritus. Resembling a party gone awry or the most daunting post-party morning hangover cleanup, Melee’s Bower Pool is surrounded by similarly composed paintings entitled Bower Curtains, which are covered in variously colored ribbons on a painted background.

An unabashed queering of monumentality and Abstract Expressionism, which both frequently reflect an artistic hypermasculinity that I have recently termed “dick-swinging art,” Melee’s Bower Pool and Bower Curtains are named after Bower birds, which build brightly colored nests of kitsch garbage to attract mates. Through his reference to Bower birds, Melee clearly asserts a tongue-in-cheek comparison between the Bower bird’s own garish gesture and the camp collections largely associated with gay men.

In “Notes on ‘Camp,’” Sontag defines camp as an adoration of the artificial. As she explains, “Indeed, the essence of Camp is its love of the unnatural: of artifice and exaggeration. And Camp is esoteric–something of a private code, a badge of identity even, among small urban cliques.” Hint: She means queers.

Indeed, Melee isn’t the only artist who sees the inherent hilarity, queerness and potential power in employing strewn-off materials as artistic inspiration. In his The Philosophy of Andy Warhol (From A to B and Back Again), Warhol professes his love of–what he describes as leftovers. As Warhol states, “I always like to work on leftovers, doing the leftover things. Things that were discarded and that everybody knew were no good, I always thought had a great potential to be funny. It was like recycling work. I always thought there was a lot of humor in leftovers…I’m not saying that popular taste is bad so that what’s left over is probably bad, but if you can take it and make it good or at least interesting, then you’re not wasting as much as you would otherwise. You’re recycling work and you’re recycling people, and you’re running your business as a byproduct of other businesses. Of other directly competitive businesses, as a matter of fact. So that’s a very economical operating procedure. It’s also the funniest operating procedure because, as I said, leftovers are inherently funny” (93).

And Warhol is right leftovers are funny, particularly as seen in Bower Pool and even in Melee’s Atlantic City series. Lining one wall, Melee’s photographs of Atlantic City revel in the city’s storied extremes of gaudiness and overly gilded lurid luxury. From dizzying stacked chairs and reflective mirrors, Melee’s photographic collages represent Atlantic City as a spiral of materialism, excess and even–with their empty interiors–loneliness.

Placing chandeliers and lamps on top of these images, Melee’s Atlantic City works portray the extensive extravagance coupled with the essential emptiness of the city itself, revealing the failed promises and dreams not only of hitting it big at the casino but also of Atlantic City itself. With the near bankruptcy of Atlantic City, these works take on a foreboding and ominous air, even while celebrating its purely aesthetic decadence.

Looking at the height of wealth and glitz, it’s difficult not to conflate Atlantic City’s moneyed mania with the art world’s itself, despite the art world’s supposed high-art tastes. In Scott Long’s essay “The Loneliness of Camp” in Camp Grounds: Style and Homosexuality, Long writes, “Camp assaults a society that presumes it knows what is serious and what is not. It strives not to imitate this authority in distorted form but to expose it explicitly as inadequate” (79). 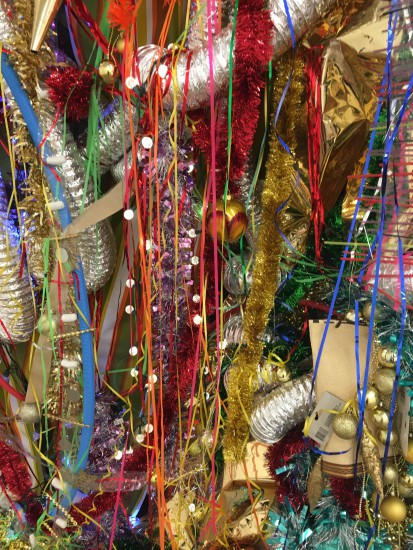 By placing both garish remnants of Party City stores and the hideous interior decorating don’ts of Atlantic City, Melee subversively disarms and threatens the high art aesthetic of the New York art world and its art viewing public. Through his revelry in strewn materials, Melee destabilizes the self-seriousness of the high-end hierarchical art world.

A conglomeration of camp, Melee’s Semi-Quasi-Bower Recreational reflects, as Charles Ludlam writes in his own musings on camp: “If nobody wants it, come to me! Bring me your poor, your tired, your yearning to be free!” (227).