“Dancing’s total freedom
be yourself and choose your feelin’
come on get up wanna see some
swingin’, swayin’, movin’, groovin’, slidin’, glidin’,
rockin’, reelin’, come on get up everybody dance”

In Fiona Buckland’s captivating and almost criminally under-read Impossible Dance: Club Culture and Queer World-Making, Buckland analyzes the queer worlds created in nightclubs through a combination of personal accounts of club-going and queer theory. Describing the uniqueness of these spaces, Buckland writes that clubs “offered a potentially more supportive environment than the domestic or the work space, but this could not be so without the practices within them. Alex remembers, ‘I needed to go and find a family to get something that I wasn’t getting at home and I found it in New York nightlife with other young kids who were searching the same need to be loved. Boy Bar was my family, the MC was kinda like my dad.’ While politicians and moral majoritarians adhere to a Puritan-capitalist ethos of family values of patriarchy, hierarchy and homogeneity, queer kinship in clubs was based on particular forms of physicality–intimacy, togetherness, a critical mass of energy, participation and sexiness” (108). 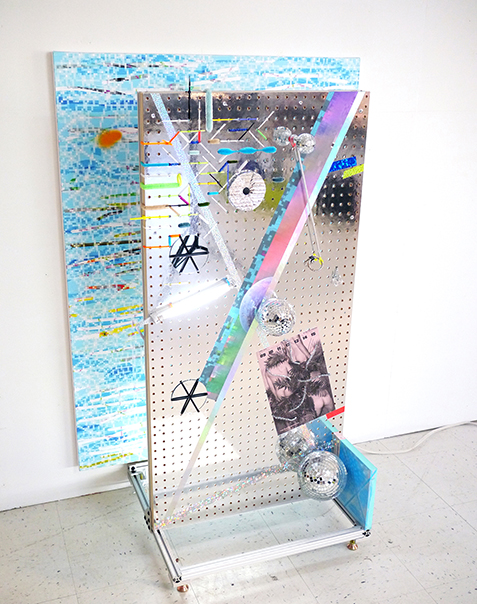 The second installment of Wester’s DISCOurse body of work, DISCOurse #2: Shine featured both wall-mounted and sculptural constructions, transcending the boundaries between sculpture, painting and collage. Through his multitude of found materials, Wester’s constructions symbolically recall the vibrant experience of dancing in these discos. With their bright-colors, silver reflections and ocular overstimulation, you can almost smell the poppers oozing from Wester’s works. 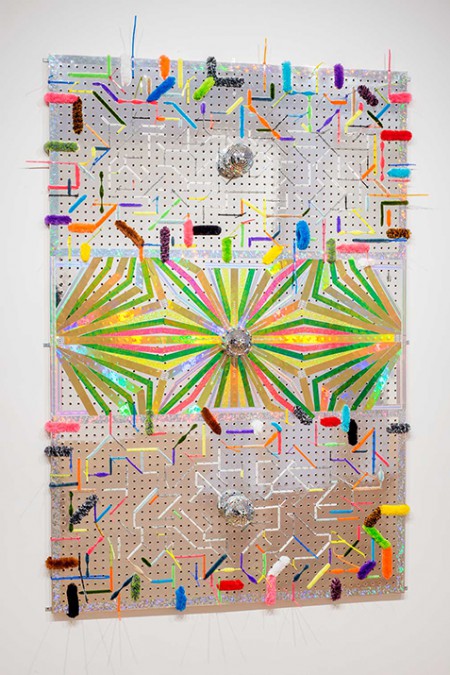 Not only highlighting the sense of attending discos, Wester’s works also symbolically depict the diversity of bodies, classes, races and sexualities that joined together under the disco balls of these clubs. By often employing cheap materials, Wester’s constructions appear democratic and universal, constructing a vision of queer utopia through everyday means.

However, no matter the diversity of materials in Wester’s exhibition, the disco ball will always be my personal favorite. Thankfully, Wester brings as many disco balls–in many sizes–as possible in his art. 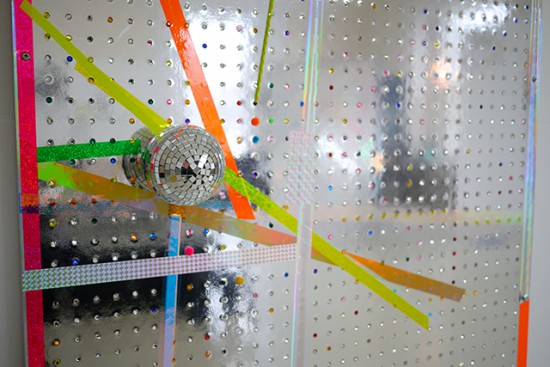 As previously discussed in my review of Anna Campbell’s disco ball-rich exhibition at BOSI Contemporary, I’m a sucker for any art that includes disco balls. When it comes to disco balls, I’m attracted to disco ball art like a moth to a gaudy flame.

Wester, too, understands the disco ball as a significant object for queer world-making. In his statement on his website discussing his DISCOurse series, Wester explains, “The spinning mirror disco ball creates a fractured, multiplicity of moving reflections in the round that are then scattered onto limitless chance surfaces–dizzying, exotic, ‘queer’ mirror, a pixilated globe. It reflects what it sees behind, in front, up, down, all around, even what we can’t see, breaking that into fragments with borders that are re-contoured by the surface-shape it’s reflected upon. Here, even a straight reflection is made queer.”

And indeed, Wester’s artworks certainly do queer their materials, as well as implicate the viewer in their reflection. With the preponderance of mirrored and slightly mirrored materials such as his metallic Mylar pegboards, Wester’s work creates a hazy reflection of the viewer, drawing them into his artistic disco.

Through his constructions, Wester articulates the queer worlds built within clubs. Detailing this utopian queer world-making in Impossible Dance, Buckland describes, “The dance floor is packed with stories all pulsating with their own experiences and needs. Any queer lifeworld: a mobile theatre or map of common relations. A queer lifeworld can be created, articulated, embodied, performed, expressed and contested. Many people who identify themselves as queer as made wordless, forced to create maps and spaces for themselves, without the support of these more traditional realms” (3).

Even though Wester’s works look back to the halcyon disco-dazed days of yore, his works are anything but nostalgic. Instead, his engagement with the disappeared discos of the 1970s and early 1980s seems to combine a representation of the past, engagement with the present and a queer utopian glance toward the future, as articulated by José Muñoz’s Cruising Utopia.

Like Jack Halberstam’s notion of queer time–a temporality separate from the normative progressive and linear “straight time,” Fiona Buckland describes a “theatre of memory” that appears in nightclubs through dancers bodily performances and interactions that recalls both the past and the present.

Examining an explanation by a club attendee Tito about his performance within clubs, Buckland states, “In the same moment of performance Tito embodied physical memories and through that embodiment interpreted the past through the present body, and interpreted and experience the present in what I call the ‘theatre of memory.’ The theatre of memory materialized a sense of self to which queerness was central. The theaters of memory performed by participants connected them to the past, to spaces and to other people. They were a vital way to materialize lifeworlds as heteronormativity dictates public culture in other ways” (18).

Although not performances within clubs, Wester’s artworks reveal a means to construct a “theatre of memory” through artistic means and without the spaces of these discos. By using contemporary materials such as BUTT Magazine or digital images, Wester’s constructions signify these discos while remaining firmly in the present. Through his works, Wester creates both a space of remembrance for these communal discos, as well as produces a collective experience for contemporary viewers. 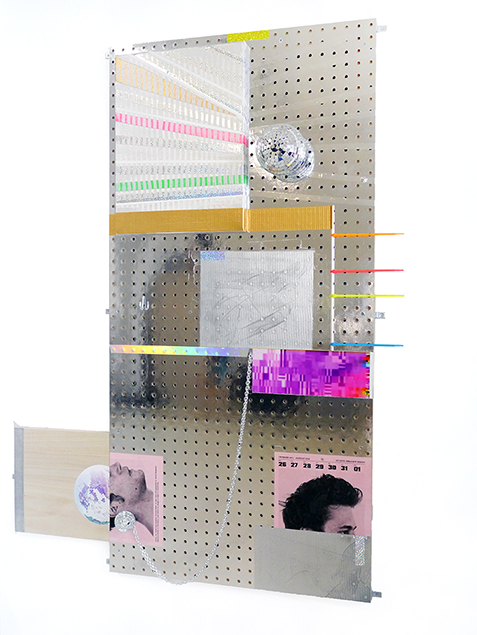 As Buckland notes, “Collective memory–not just sites and people, but common experiences–materialized collective reality and constituted queer lifeworlds, suggesting the constructive power of pleasure to transform the grid of New York City into personal and communal theaters of memory” (23).

In DISCOurse #2: Shine, Wester encapsulated the wide variety of possibilities within discos from sexual to self-fashioned identity to communal connection, As Buckland observes, “It is about community and individualism, politics and pleasure, past, present and future, mourning and celebration, mimesis and difference” (1).

2 thoughts on “Dance With Me In The Disco Heat: Disco Memories In Bradley Wester’s ‘DISCOurse #2: Shine’”