Will someone please think of the perverts?! 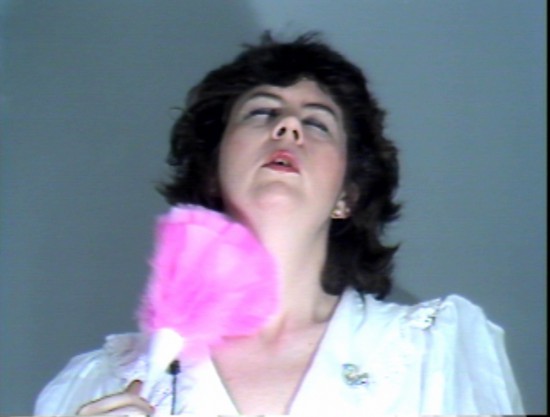 Conceived in 1981 but only now exhibited to its full potential due to the opportunity of contemporary technology, Alone at Last offers a glimpse to the past and heavily romanticized sexual freedom of the 1970s and early 1980s post-gay liberation and just before the heightened sex panic of the HIV/AIDS pandemic.

Alone at Last was created by Emily Armstrong and Pat Ivers, who are perhaps best known as the documentarians of the East Village punk scene through their Nightclubbing show on Public Access and more recently, their Go Nightclubbing archive. If you want to see Divine perform with The Dead Boys or David Wojnarowicz in 3 Teens Kill 4, Ivers and Armstrong are your go-to ladies.

Hattie Hathaway in Alone At Last

In addition to capturing the raw energy of punk’s emergence in Downtown counterculture, Ivers and Armstrong also contributed to the boom in nightlife, designing the first video lounge at Danceteria. In Alone at Last, Armstrong and Ivers drew on these connections to the electric and captivatingly creative artists, writers, musicians, nightlife personalities and East Village characters, filming these figures seducing a camera and eventually, a gallery goer in a series of 52 come-on portraits.

Entering the red curtain into the booth, a participant is asked several questions about their proclivities on a touch screen on who or what they desire. Some of these choices are more straight-forward and self-explanatory such as “Boy/Girl?” or “Straight/Gay/Ambiguous?” Then things get a little more difficult and raunchier with options including “Daddy Issues” and “Vampire/Blood Play.”

After making your choices, the screen lights up and the seduction begins. Trying out several options in the installation, the seduction strategies vary widely between the various subjects. Some are funny, some are clearly drunken come-ons that you’ll come to regret in the morning and some are downright disturbing. But hey, there’s someone for everyone. 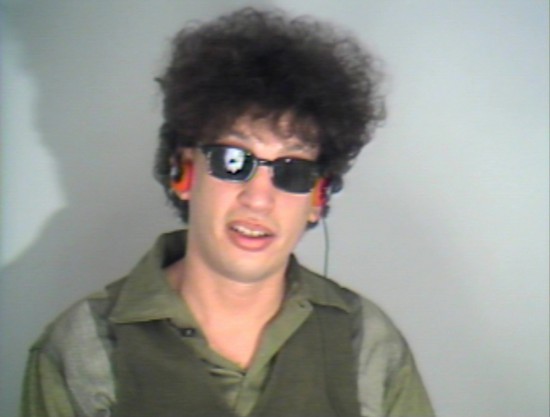 While many of the subjects are not as well-known, certain notorious Downtown nightlife figures appear such as Brian Butterick, better known as Hattie Hathaway who curated the last exhibition at Howl! on the Pyramid Club, or even, club doorman Haoui Montaug.

On the wall near the booths, a graph reveals the path to each of the 50 seducers. Somehow I missed “Poop Guy.” Well, a girl can dream.

Blood play in Alone At Last

While undeniably engaging in radical sexual politics and confronting the anti-pornography stance of many feminists in the early 1980s, Alone at Last would be read as an entirely different political statement only a couple years later as AIDS not only claimed the lives of certain participants in the videos such as Haoui Montaug but also led to the city’s crackdown on bathhouses, backrooms and sex clubs. Even some of the performances would be understood through a completely different perspective, particularly the woman shooting up and licking her own blood. However, Alone at Last does, in fact, present a virtual form of safe sex.

As a member of a generation coming of age during the ongoing HIV/AIDS pandemic, the sexual freedom of the 1970s and early 1980s seems like an occurrence of a completely different time, only accessible through art, literature or the memories of those who lived it. Certainly some aspects of Alone at Last can seem a bit dated, namely the strict binary division of gender (boy or girl) that is increasingly becoming more and more fluid–a product of its time rather than the installation itself. Alone at Last allows for at least a chance to gaze into that radical expression and subversion through sexual experimentation.

Asserting in his catalogue essay “Sex in the Seventies, or Everyone Wants to be Diana Ross” that Alone at Last should be “required viewing for everyone under forty,” Fales Library & Special Collections’ Marvin Taylor recalls, “Sex in the seventies was nothing like what so-called sex is today. We were feral cats, perpetually in heat, rubbing our cocks and pussies and asses on anything, anyone, anywhere in any way that would get us off.”