Duane Michals, Young Men Dreams In The Garden of the Dead with Flowers Growing From Their Heads, 1995, gelatin silver print with hand applied text (all photos, unless otherwise noted, courtesy the artist and DC Moore Gallery, via pacemacgill.com)

Reflecting this incitement to reverie, photographer Duane Michals’ vast and engrossing retrospective Storyteller: The Photographs of Duane Michals at the Carnegie Museum of Art in his (and my) hometown of Pittsburgh showcases Michals as a creative figure who, throughout his long career, consistently breaks the strict rules and regulations frequently imposed on the surprisingly conservative field of photography. Best known for his multi-image narrative photographic sequences, which controversially feature Michal’s own poetic captions on the photographs themselves, Michals collapses the division between the photographer and the viewer through the visible scrawled hand of the artist, countering Sontag’s theorized “sense of the unattainable.”

Curated by Carnegie Museum of Art’s curator of photography Linda Benedict-Jones, the comprehensive exhibition investigates Michals’ frequently overlapping photographic themes from sensuality to the imagination to the duel cities of Paris and Pittsburgh. From his surreal, often nostalgic and, at times, unabashedly sentimental photographic series such as the sickeningly saccharine yet still moving Grandpa Goes To Heaven to his portraits of artists such as Andy Warhol and his role model and mentor Rene Magritte to his experiments combining paint and photography, Michals examines topics as challenging and varied as death, time, homoeroticism and queerness. Not only an art photographer, Michals also extensively works in commercial photography, most notably creating the cover of The Police’s Synchronicity.

Ever the photographic rebel, Michals began his career in the 1960s with the shocking choice to write freehand on his photographs, which made his photographic contemporaries and photo critics clutch their camera-wielding pearls. As Benedict-Jones writes in his catalogue essay for the exhibition, Michals “recalls that soon-to-be-legendary photographers Garry Winogrand and Joel Meyerowitz walked out. ‘This isn’t photography,’ asserted Winogrand. The show was largely ignored by the press, and according to Michals, even the New York Times art critic was baffled” (21). 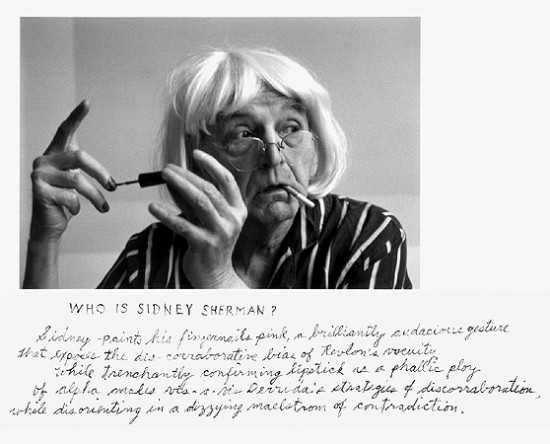 Since his early days as a photographer, Michals continued to view the art and photographic world with some scrutiny and sometimes mocked the self-seriousness of the art and photographic world through his photographs. One of my personal favorites of Michals’ art world parodies is his 2000 series Who Is Sidney Sherman? (James Franco, take note). Dressed in a ratty wig, resembling a tired old drag queen who has seen better days, Michals constructs his own biting version of Cindy Sherman’s Untitled Film Stills. Not attempting to recreate Sherman’s iconic works, Michals adds almost Mike Kelley-esque campy captions filled with effusive and baffling art speak. For example, one photograph describes, “Sidney paints his fingernails shocking pink, a brilliantly audacious gesture that exposes the dis-corraborative gender bias of Revlon’s vacuity while trenchantly confirming lipstick as a phallic ploy of alphamales vis-à-vis Derrida’s strategies of dis-corraboration, while disorienting in a dizzying maelstrom of contradiction.”

While Michals’ retrospective had me lingering perhaps too extensively in the exhibition, reading every caption possible, I was naturally drawn to his erotic and metaphorical depictions of queerness in his photographs. Coincidentally, I first encountered Michals’ work in Hide/Seek: Difference and Desire in American Portraiture at the Brooklyn Museum several years ago with Michals’ photo-series Chance Meeting. Created in 1970, the photographs depict a highly coded image of two men, dapperly dressed straight out of Mad Men, walking through a bricked alleyway. Passing each other, both men, in different frames, turn to glance back at one another. Even though it could be taken as simply two men wandering down the street, the photograph is powerfully fraught with desire and mid-century cruising.

Growing up in the blue-collar steel town of McKeesport, Pennsylvania Michals recalls that he “never even heard the word ‘gay’ but you didn’t want to be a queer, that was for sure.”

Although Michals works are not outwardly political, many of his series symbolically reveal the social realities of queerness. For example in his photograph The Unfortunate Man, Michals photographs a curly-haired young boy from the back, bending backwards with boots on his hands. Below the photograph, Michals writes, “The unfortunate man could not touch the one he loved. It had been declared illegal by the law. Slowly his fingers became toes and his hands gradually became feet. He began to wear shoes on his hands to disguise his pain. It never occurred to him to break the law.” Like one of Pinocchio’s naughty boys at Pleasure Island, the doomed Unfortunate Man appears transformed by his illicit desires.

Duane Michals, Things Are Queer, 1973. gelatin silver print with hand-applied text (Courtesy of the artist and DC Moore, via dcmooregallery.com)

At times, Michals’ representation of queerness was even more veiled than The Unfortunate Man or the stunning photo-set Bewitched Bee, which weaved a fairy tale-esque narrative resembling the ongoing HIV/AIDS crisis. In one of the first photographic series in the exhibition, Michals captures that Things Are Queer. Like an ouroboros, Things Are Queer presents an endless loop of photographs beginning and ending with a bathroom hung with a photograph of a man reading a book with a photograph of the bathroom. While none of the imagery seems blatantly queer, Michals, using the word queer, is clearly aware of that aspect of the photographs. Let’s be honest, what could be queerer than an endless loop of a bathroom, a man and an alley?

Like the use of queer in Things Are Queer, many of Michals photographs contain a similar hidden, coded sense of queerness. Discussing Michals’ photographic series Paradise Regained, in which a man and a woman return back into the Garden in his essay “Wounded By Beauty,” Allen Ellenzweig points out the centrality of the male figure, highlighting the sensual beauty of his nude form.

Explaining his reaction in viewing the photograph while closeted himself, Ellenzweig recalls, “How did he, this Duane Michals, know my secret? But then, if the artist knew my secret, did I know his? At the time, it did not seem possible that any man who called himself a photographer would be nervy enough to put on display another man’s beauty, unless, he, like me, was moved by maleness in all its sublime physicality. As a young man awakening to the insistent call of sexual stirrings, I had the sense that my feelings were illegitimate and dangerous, to be hidden away in that box called my heart. This made me attuned to any sign that I was not alone in my affections, for like the first two humans aware of their nudity after the Fall, I too suffered shame and held a fig leaf over my identity.” (61)

Stunningly beautiful and certainly queer, Michals’ photographs interpellate certain queer viewers, rendering the viewing experiences different for each individual. As Michals coyly states, “My photographs are about questions. They are not about answers.”