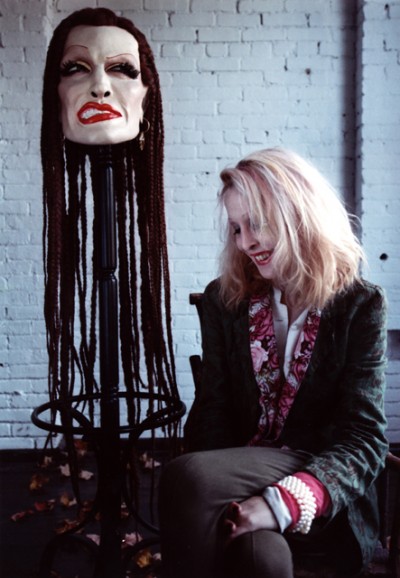 Greer Lankton with one of her works, 1996 (Photo by Annie O’Neill, via artnet.com)

One aspect of our collective Filthy Dreams personality that you, dear reader, can be sure of is our ability to get unabashedly, giddily excited at a moment’s notice. Just a mention of Santa Claus near the holidays sends us spiraling into the sleazy stratosphere. It doesn’t even matter how far in advance this event, exhibition, concert or book release is–we’ll just gush and gush until that event actually happens. Which brings me to the announcement last week that Lower East Side nonprofit art space Participant Inc. is working on a major solo exhibition of trans artist Greer Lankton’s phenomenal, genderqueer art in November 2014.

An important figure in the heavily romanticized period of the East Village art scene in the 1980s and 1990s, both Lankton’s dolls, in all their destroyed glory, and her own striking appearance in other notable artists’ work from Nan Goldin and Peter Hujar’s photographs to Nick Zedd’s transgressive classic Bogus Man make her an essential (if not unfortunately slightly forgotten) link in queer art history.

As John Waters snarled at Marion and me as we posed with him and our own striking doll, “You know I love dolls.” And yes, we too love Greer Lankton’s distorted and beautiful dolls.

Getting ahead of ourselves as we often do in our typical unbridled and slightly off-putting fashion, we want to highlight Greer Lankton’s art even though her solo exhibition LOVE ME will not appear at Participant Inc. for another year.

Greer Lankton, It’s All About ME, Not You, 1996 (Courtesy the Mattress Factory)

My first introduction to Lankton’s art was her most ambitious and her final art piece, which is on permanent view at Pittsburgh’s Mattress Factory. A stunning and semi-terrifying installation, Lankton’s “It’s All About ME, Not You” lives up to its wittily egotistical title, encapsulating all of Lankton’s personal obsessions, creative interests, experiences and struggles, which eventually led to her death from an accidental drug overdose right after the installation was finished in 1996. 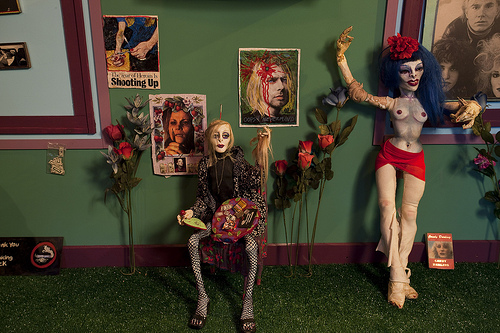 Greer Lankton, It’s All About ME, Not You, 1996 (Courtesy the Mattress Factory)

In “It’s All About ME, Not You,” the viewer walks through an Astroturf-covered lawn and patio inside a trashy-looking white house in which Lankton recreated her own apartment where she both lived and worked. Filled with her dolls, as well as shrines to her heroes from Warhol Superstar Candy Darling to punk goddess Patti Smith, the installation encompasses Lankton’s entire artistic world view. While decadence pervades all of Lankton’s art, this installation forces the viewer to confront decay with an almost life-sized doll in a bed, surrounded by pill bottles, an eerie premonition of the artist’s own death.

Born Greg Lankton in Flint, Michigan, Lankton moved to New York in 1980 after her sexual reassignment surgery at 21, which was paid for by her Presbyterian minister father’s church. After her arrival in New York, Lankton almost immediately began exhibiting profusely in the burgeoning East Village art scene at galleries like Civilian Warfare with fellow artistic outlaw David Wojnarowicz, as well as the seminal New York/New Wave exhibition at PS1.

Making dolls since she was a child, Lankton’s painted dolls, constructed out of wire, pantyhose and glass eyes ordered from a taxidermy shop, resemble unhinged surrealist Hans Bellmer’s distorted, detachable and sexualized dolls. Drawing on this surrealist legacy, Lankton’s dolls ranged from known subcultural figures such as Divine and Edie Sedgwick to her own imaginative creations.

As Lankton explains in her 1984 interview with I-D Magazine, “Because all other dolls are not so real as these. These are grotesque. I want them to have a personality. I think that while I’m making them something from me goes into them.” 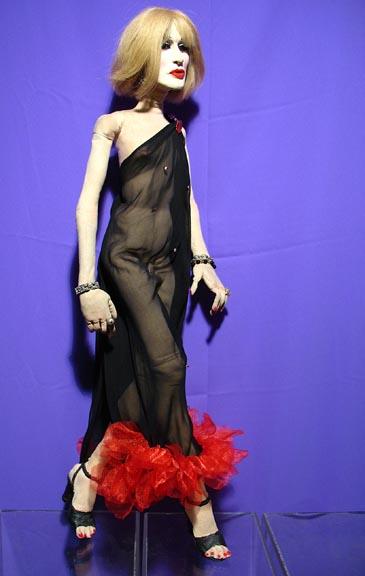 Unquestionably spot on with her analysis of her own work, Lankton’s art mirrors much of her own experiences as a transwoman, playing with notions of gender performance, identity and sexuality. For example, one of Lankton’s favorite and most used subjects was glamorous drag queen Candy Darling. Looking at her Candy Darling dolls, the dolls reflect Lankton’s own trans beauty through Darling’s lithe, old Hollywood form.

Not only do Lankton’s dolls portray Lankton’s performance of gender and sexuality, she also imbued the dolls with their own personal problems, reflecting her own. Struggling with anorexia and drug addiction, Lankton created dolls in her own image with a destructive impulse countering their gorgeous exterior.

In her interview with I-D Magazine, Lankton reveals, ““Eating disorders, depression, they can’t get jobs, their apartment is too small…all the normal problems that all of us have. They also have bad habits…I mean some of them do eat too much though some of them don’t eat at all. They stay up too late, smoke too much…the most tasteful doll I’ve made is a real pretty one, but I don’t like him too much because the pretty ones aren’t very interesting. It’s like with people. The prettiest people are the blandest.”

Since her passing in 1996, Lankton’s legacy certainly lives on through Nan Goldin’s iconic photographs. However, her surreal, stunning and slightly disturbing art has often been overlooked in the dominant understanding of the East Village art scene, passing by Lankton for more male and commercially acceptable artists. With so much significant art and writing currently being made around transgender and genderqueer issues, Lankton’s solo retrospective at Participant Inc. is posed to resurrect Lankton’s legacy, putting her in conversation with these younger artists and giving her a proper place within queer art history.

5 thoughts on “The Pretty Ones Aren’t Very Interesting: The Genderqueer Art Of Greer Lankton”