Trump’s Lord of the Financial Jungle Birthday Invitation, 1994 (Courtesy of a/political and ArtX)

I live with Trumpy Bear. Yes, the “I come when the Trumpet sounds. I am the Storm!” Trumpy Bear with a comb-over, a tragic tie, and an enormous American flag built into his back. The one from the commercials airing on Fox News that seem like an SNL skit (what doesn’t anymore?). My relationship with my Trumpy Bear is strange and ever-evolving. When I was first gifted Trumpy Bear by Santa, after insisting to anyone who would listen that I need this pinnacle of plushie trash, I, exhausting my initial Christmas cheer, felt unsettled daily with this grizzly representation of our President just hanging out in my apartment. In my home! Paranoid that he contained some sort of Russian spyware, I kept moving him into whatever room I wasn’t currently in (okay, one of two rooms). However, as time progressed, Trumpy Bear and I have reached some strange sort of stalemate–a détente, if you will–like a roommate who makes you a little uncomfortable, but you can’t get them off the lease.

This is all to say, I’m perversely fascinated with the tacky material culture of Donald J. Trump. Not the fascist fashion of the MAGA hat-sporting goons, but the items in which he or others have branded with his bloated countenance throughout the years of his many incarnations as hotelier, casino scammer, ruiner of Atlantic City, reality TV icon, Wrestlemania guest star, and eventually despot. I mean, president! As John Waters says, “I love everything that’s bad with America.” And, really, who is worse than Trump and his decades of bad merchandising?

Luckily, I’m apparently not alone. Artist Andres Serrano seems to also have a demented fixation with Trump’s crap if his current pop-up installation The Game: All Things Trump on 14th Street is any indication. Organized by a/political and ArtX, The Game: All Things Trump fills a former Meatpacking District nightclub with an avalanche–$200,000 worth to be exact–of Trump-related items, sourced by Serrano from online venues like eBay and word of mouth. Although there are certainly some aesthetic similarities with endearingly hoarder-like memorabilia museums and roadside attractions, the installation is like a haunted house without any jump scares, though the amount of times you encounter Trump’s leering grin is enough to frighten the pants off just about anyone. Here, though, the horror is our own.

The Game is titled after a board game modeled after the man himself, although, as the installation proves, this is not the only game based on Trump. He even has his own version of Monopoly, the point of which, I imagine, is to refuse to sell property to Black people. Immediately upon entering the installation, a collection of The Game greets viewers in a vitrine. On the opposite side of the door, an amalgamation of Trump campaign pins is juxtaposed with a set of hilariously kitschy coffee mugs from the Trump Plaza featuring cartoonish versions of elderly slot players.

But, this was just the primer. The two-story exhibition really hits its stride in the main exhibition spaces, grounded by a corny rotating sign that reads “EGO.” This would be on the nose as an art piece, but instead, it’s the sign for the bar and lounge from the Trump Taj Mahal. Classy. Nearby, an enormous photograph of Trump looms overhead, taken by Serrano from his America series. It is also the only original work by Serrano in the installation. The Game’s impact is dependent on its sheer and unwavering overabundance of garbage that Trump leaves in his wake: Trump steaks, Trump vodka, a wall of magazine covers featuring Trump, signed photographs, a diploma from the scam Trump University, binders of “Trump’s Guide to Distressed Properties,” a T-shirt advertising the “Mile High Club” at the Trump Marina, a wonderfully simplistic Trump Plaza cooler, a slot machine celebrating the 25 years of the Trump Plaza casino, hideous lights from Harrah’s at Trump Plaza, poker chips emblazoned with Trump’s face, an Apprentice Trump doll, Trump bucks, deodorant, shampoo and soap from the Trump hotels, Diet Snapple with Trump’s face, and even, a Trump kazoo.

And thank god. For the power of The Game is not in viewing the President through the eyes of an artist, it’s in confronting Trump as he’s imagined and created himself. This is perhaps best observed in the juxtaposition between Serrano’s portrait of Trump and Trump’s own baffling 1994 birthday party invitation. The invite features Trump as a sort of romance novel version of Tarzan, standing proud next to his Jane, who I assume is Marla Maples, in some fantasy version of both a tropical paradise that is being razed and developed for hideous Trump properties. Lest we miss the point, Trump is described as “Lord of the Financial Jungle” in its offer for invitees to “Embark on a Birthday Adventure of the Wildest Kind Starring Donald J. Trump.” With that kind of “untamed excitement,” I wanna join! This already cheesy image is heightened by an opulent and ornate gold frame. In comparison to Serrano’s relatively straightforward and quite tame depiction of the unquestionably unattractive man, this hyped-up heroicized Trump is clearly how he wants to present himself.

I’ll admit that The Game is an intimidating viewing experience. The eerie effect of being surrounded by representation upon representation of Trump, was compounded, at least for me, because I was the only person in the exhibition when I attended. Spooky. And on some level, I get it. The Game is even challenging to enter. Nobody wants to be seen willingly entering a Museum of Trump! This emptiness was certainly notable in comparison to the long line of people outside other corporate Instagram-based shills that now seem to define the current day Meatpacking District like Mickey: The True Original Exhibition or The Museum of Illusions. It felt as if I was wandering through some sort of wreckage, which, given the state of the country, is quite apt. 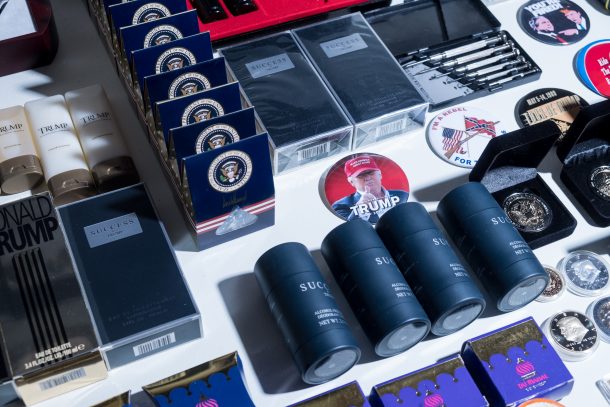 Taking in the countless objects in the exhibition, I felt overwhelmed–not by rage, not by terror, not by hatred. I felt, in spite of myself, impressed by the man. And it wasn’t just the spot-on soundtrack, which played pitch-perfect thematic songs like Talking Heads’ “Once in a Lifetime” and The Rolling Stones’ “(I Can’t Get No) Satisfaction.” I was impressed by Trump’s decades-long con game with the American public as his mark. Looking at a T-shirt from a Doritos rewards program featuring Trump holding up fistfuls of cash (tempting!), I became convinced that Trump is perhaps the greatest con man in American history, climbing from scam to scam until he reached the highest office in the land. P.T. Barnum has nothing on Trump! His scams never ended with running the country. Knowing that Trump, through many of the years examined in The Game, lost more money than any other taxpayer just compounds the effect. Sure, the excessive displays of wealth portrayed in the installation were complete falsehoods, but at the end of the day, it didn’t matter. Fake it till you make it.

Part of the strength of The Game is in Serrano’s willingness to set his own views aside (whatever they are), leaving viewers to their own responses. Admittedly, this is not something that everyone will appreciate, preferring the howling anger into the void that has defined social media through the Trump years. But that hasn’t been successful, has it? Here, Serrano leaves us to come to our own conclusions and yes, that may leave the door open to positive interpretations too. Frankly, I can imagine Trump being flattered by Serrano’s archival attention. But, I don’t think that makes it an ineffective statement.

In fact, I find it more powerful than much of the anti-Trump art I’ve seen post-2016, which seems to counter Trump and his cronies’ cooptation of transgression, and trash and camp aesthetics with tired unflattering portraits of Trump, finger-wagging moralism, or self-involved pearl-clutching. A prime example is Marcus Fischer’s Untitled (Words of Concern) at the 2019 Whitney Biennial, a sound piece documenting a conversation between artists at the fancy Rauschenberg residency about their fears of Trump before the inauguration. I rolled my eyes and I’m on their side! Talking in a vacuum certainly doesn’t force us to grapple with Trump’s rise and continued popularity. Serrano himself seems to understand this, telling The Observer: “I find that in the art world it’s clear how people feel about Donald Trump. But to me, it’s boring to do something anti-Trump. It can be easily dismissed, there’s no real depth to it, it’s one-sided.” He’s not wrong. 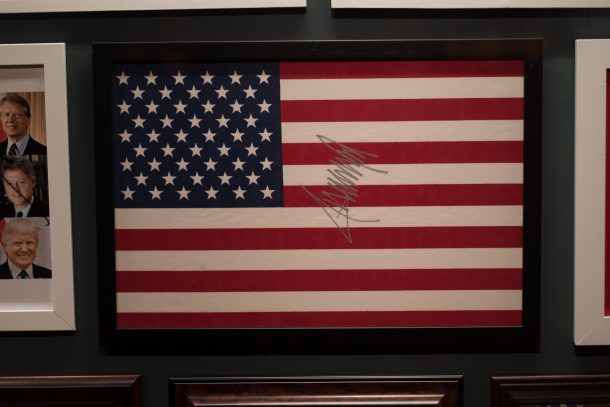 With The Game, Serrano asks viewers to gazing long and hard into the heart of darkness of America that paved the way for the Trump presidency. The Game isn’t just a portrait of Trump; it’s a portrait of America, namely the pinnacle of late capitalistic absurdity and the outsized desire for wealth and fame (and whiteness) that defines the American dream, from the late 20th century to early 21st century. And it’s not a pretty picture.

The installation also shows the absolute ubiquity of Trump’s likeness traversing through our cultural zeitgeist. It’s no wonder he became president–he’s as American as apple pie. In Stephen L. Hamelman’s But Is It Garbage? On Rock and Trash, he defines American trash culture as: “Natural rights, baseball, apple pie, huge gas-guzzling cars, guns, blockbuster movies, strip malls, Disney/Pixar cinema, talk shows, billboards, theme parks, fast food, superheroes, superstars, little pink houses, Andy Warhol’s prints of Marilyn Monroe, Elvis Presley and Campbell soup cans. Rock and roll music. The music of the Velvet Underground too. And garbage … heinous beyond description, heavy beyond statistical calculation, beautiful beyond belief. American culture, American garbage, American art.” Somehow all that is missing is Donald Trump, but he lies there, somewhere between the talk shows, the theme parks, the reality TV and even, Warhol. There’s a reason Warhol appears with Trump, presumably at Studio 54, in a wall of photographs in The Game, next to a signed glamour shot of Kellyanne. 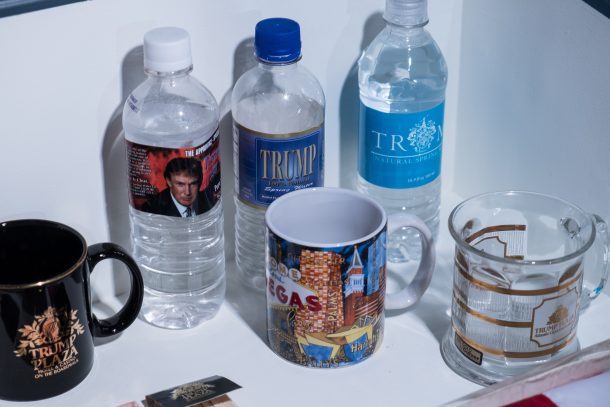 Like The Velvet Underground song, Trump is America’s mirror, reflecting a certain nightmarish adoration of American success at any cost and at any exploitation. And despite the sheer amount of stuff in the Meatpacking District storefront, The Game feels undeniably vacuous. With all the branded tchotchkes, gewgaws, magazine covers, and head shots, evidence of the American dream obtained, what is behind it? Nothing. Trump is essentially an IRL Wizard of Oz.

In some ways, this understanding of Trump as evidence of a particularly American con game is akin to Hunter S. Thompson’s lifelong understanding of his nemesis Richard Nixon as representative of something truly beastly and fascist about the country. Even after Nixon left the White House in shame, Thompson was still swimming around in a Nixon mask in a BBC documentary Fear and Loathing on the Road to Hollywood. Finally, I understand this intractable urge to stare deep into America’s abyss. And the abyss surely does stare back, peeking out of a startling orange face. Like Nixon, Trump didn’t create this America, but its current white supremacist capitalist horror show is certainly built in his image. As David Byrne shouts, “Same as it ever was!”