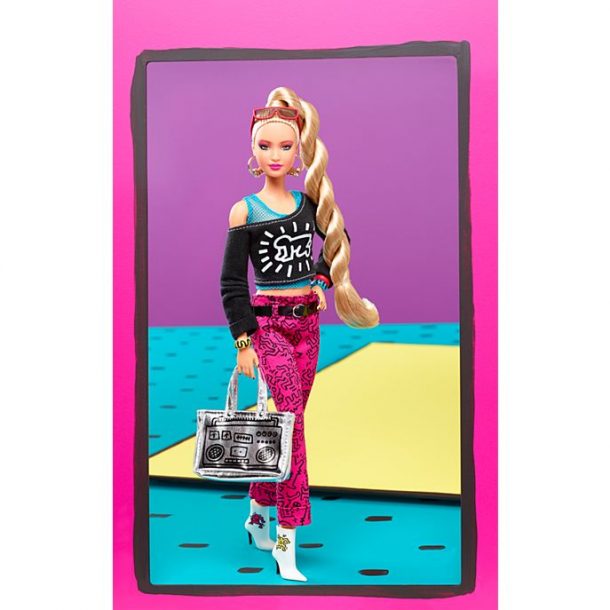 Does Barbie know about AIDS? Does she know her new friend Keith Haring died of complications from AIDS?

These are the questions, some of many, I found myself considering when I discovered last week to both horror and amusement that Mattel produced, in collaboration with the Keith Haring Foundation, the Keith Haring X Barbie® who looks as if she fell headfirst into a bin of Keith Haring attire at UNIQLO. The description on the back of the doll’s box boasts: “With a shared passion for everything pop, Barbie celebrates the artistic impact of renowned artist, Keith Haring, whose colorful work continues to inspire and delight.” Similarly, the Twitter post I peeped introduced Keith Haring X Barbie as “paying tribute to the artist’s impact on pop culture.”

How did Barbie celebrate Haring’s impact? By draping herself in apparel branded with anything and everything Keith Haring. Nothing says memorial like merch! 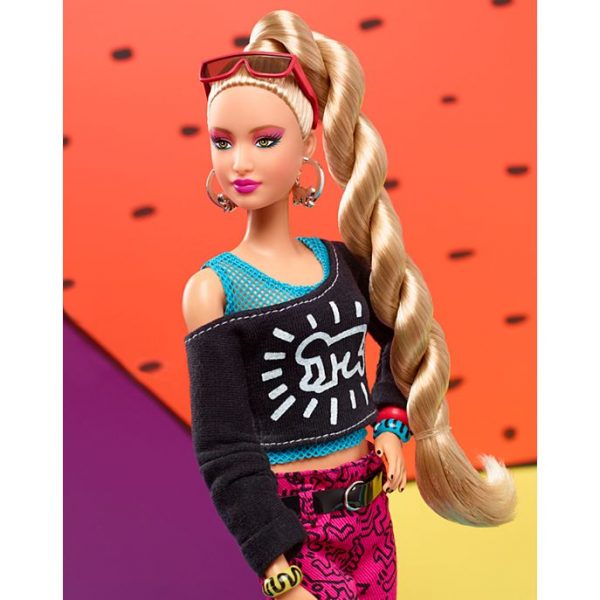 Barbie’s outfit is something to behold. It’s like a 1980s fever dream, as if Barbie robbed the Pop Shop in a frenzied fanatical fit and ran out wearing everything she could find. Barbie sports an off-the-shoulder sweatshirt emblazoned with Haring’s eponymous radiant baby, worn over a neon blue mesh tank top because *fashion*. Of course, just one radiant baby wouldn’t be enough. They are also found on Barbie’s enormous gold door-knocker earrings. Do you think Barbie clutched her pearls when she saw Haring tagging the subway stations with this same character or is B down with graffiti art?

If that weren’t enough, Barbie also donned some hot pink pants covered in Haring scrawl, including his quintessential barking dogs and dancing figures, but sadly, not the wiggly, worm-like sperms that sometimes peppered his paintings. Even her shoes are stamped with colorful Haring figures, as well as her tote that features a boombox, which is the only item I covet of Barbie’s manic outfit. And on a pettier level, the makeup doesn’t do much to tone down Barbie’s harried Haring hysteria, particularly her eye shadow that reaches the edges of her eyebrows as if she got her makeup tips from Divine. Ultimately, it feels like a missed opportunity to, at least, cover Barbie in Haring’s lines like Grace Jones. 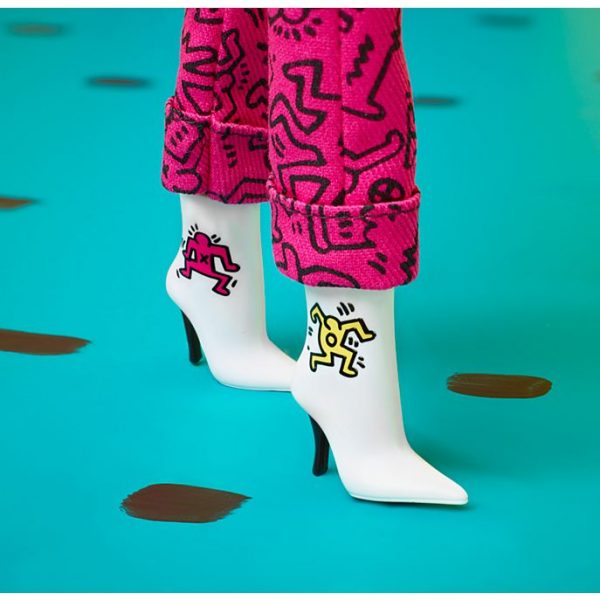 And sure, living in the last gasps of late capitalism is always a startling experience. Just look at Father Yeezy Kanye West’s $50 “Jesus Walks” socks sold at his Peoples Temple-esque Sunday Service performance at Coachella. But, somehow, it never gets easier to try to reconcile how everything radical can get boiled down to its simplest and often weakest essence, exploited and coopted to be reconfigured and resold, including Haring’s artistic output. Is this really the only way to celebrate Haring’s pop cultural impact? A questionable fashion statement on a doll? Mattel seems to think so, as it also explains on the back of the box that it is “the definitive celebration of two timeless pop-culture icons.” Who needs a catalogue raisonné!

To give Mattel some credit, Haring certainly didn’t shy away from making pop products himself, from T-shirts and pins to stickers and bags at his own Pop Shop, which was located at 292 Lafayette Street from 1986 until 2005, fifteen years after his death. Ironically if it hadn’t closed in 2005, the Pop Shop would probably be one of the most popular stores in SoHo in 2019, as the forces of romanticism and nostalgia have made Haring’s work and apparel cool again. Play the long game, landlords!

For Haring, though, printing his work on clothing or other items wasn’t to turn a profit, not a business art venture as his friend Andy Warhol would understand it (though Warhol was an influential figure in encouraging Haring to open the Pop Shop). It was about maintaining the same accessibility that his work gained from being on the street once Haring moved farther into the commercial art world. As he explained, “Here’s the philosophy behind the Pop Shop: I wanted to continue this same sort of communication as with the subway drawings. I wanted to attract the same wide range of people, and I wanted it to be a place where, yes, not only collectors could come, but also kids from the Bronx. The main point was that we didn’t want to produce things that would cheapen the art. In other words, this was still an art statement.”

Admittedly, Haring’s is undoubtedly an idealistic view of what consumerism can do, but there is something to be said for bringing a message into the world on a T-shirt or a tote bag. The key here is that not all of Haring’s inventory was as apolitical as it appears on Barbie. I have a sticker that I purchased at the Pop Shop before it closed that reads “Debbie Dick for President! More Balls Than Bush!” If only Barbie was sporting that message! 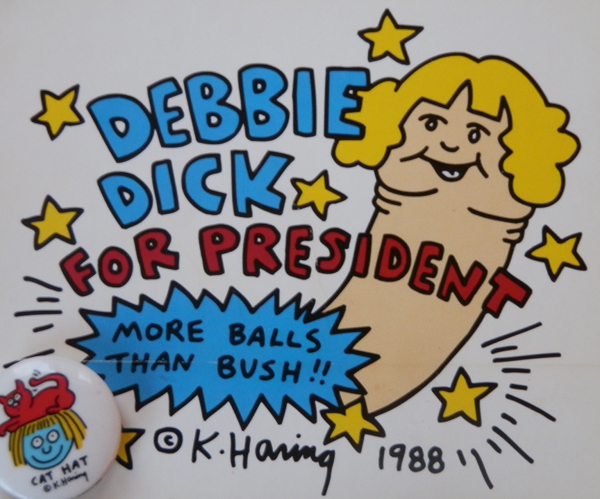 Mattel does make a reference to Haring’s politics, but it could not be in a more generic manner. On the box, it reads: “With a distinct visual language, inspired by graffiti art, and with a bright, contrasting palette, Haring tackled political and societal themes, reaching a diverse audience through both public and private projects.”

Uh huh…and what are those “political and societal” themes?

It should be said that Keith Haring X Barbie isn’t the first Barbie to pay tribute to an artist, which includes a series of three Andy Warhol Barbies. One appears like a drag king version of Warhol, another is a cross between Factory superstars Edie Sedgwick and Baby Jane Holzer, and the final, Barbie adorned with her own Warhol portrait. Can you say narcissism? However, these Barbies seem much more in line with Warhol’s sensibility, and don’t seem to erase an integral part of his creative output or life.

In contrast, given Haring’s engagement with AIDS activism, including his participation in ACT UP protests, creation of posters, flyers and invitations for benefits, and themes in his work in regards to the pandemic, not to mention his own diagnosis in 1988 and death in 1990, it seems like erasure to not even reference HIV or AIDS, even on the back of the box. Bare minimum, guys. It’s not like Barbie hasn’t given a nod to HIV/AIDS before, by including the red ribbon on an Elizabeth Taylor Barbie. Particularly in the context of brands, products and corporations’ recent and obvious impulse to virtue signal through the appearance of “woke” politics and imagery in advertisements and social media campaigns, as well as art institutions’ desire to revisit the height of the AIDS pandemic in both group and solo exhibitions, it’s curious that Mattel, or even the Keith Haring Foundation, didn’t seem to see the benefit to reference Haring’s relation to the ongoing pandemic. And yes, I know we’re talking about Barbie. Sure, I may be looking way too deep into Barbie’s meaning here, but as our preeminent filth elder John Waters states, “You know I love dolls!” It appears, though, I’m one of the only people who find this as unsettling, as Nylon Magazine excitedly gushed about Barbie’s new collaboration with an “iconic queer artist.” But, at what cost?

What I can’t help but think is what would the impact be if Barbie did engage with HIV/AIDS and Haring’s legacy. By selling the Keith Haring X Barbie to collectors and kids alike, a version of Haring gets put into the world. It’s worth questioning exactly what that means and what a doll engaging with HIV/AIDS might offer. What if Barbie was wearing a T-shirt featuring Haring’s “Ignorance = Fear” poster? Or one of Haring’s safe sex images? What if the picture on the box was Haring protesting at City Hall with ACT UP? 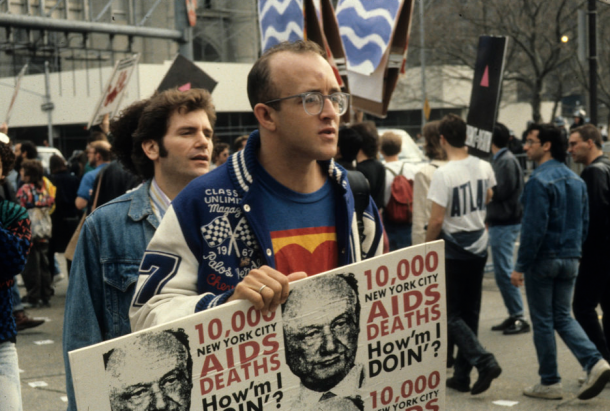 Or even, what would a HIV/AIDS activist Barbie look like? With her decidedly 1980s get-up and baffling hairdo, it seems like the Keith Haring X Barbie exists in the late 1980s or 1990s, or at the very least is still mentally there. Would she wear a leather jacket and a Silence = Death shirt? Would she carry around a bucket of red paint to slather all over Lower Manhattan to show that “the government has blood on its hands”? Would she march at City Hall with Keith? Would she slap up Gran Fury Riot stickers? Would she attend the Party of Life? Did her friends die? Are they living with HIV or AIDS?

This isn’t to say I don’t covet the Keith Haring X Barbie in my own way. I do, if only to do demented photoshoots attempting to offer a corrective by more accurately honoring Keith Haring’s life and impact (Quick! Someone Venmo me $50 so I can do this). Perhaps Barbie could pose in front of the “Crack is Wack” mural in Harlem so that Barbie could reflect on the structural and institutional inequality that allowed the crack epidemic to decimate communities of color and the outsized incarceration of drug users in these communities. Or maybe, Barbie could visit the Center to flit among the rampant phallic imagery and orgiastic ecstasy inside the Keith Haring Bathroom. I like to imagine Barbie musing about the lost utopian sexual freedom depicted in Haring’s One Upon A Time that was decimated due to the onset of the HIV/AIDS pandemic. Now, that’s a tribute!