Last week, The New York Times reported the oh-so-disappointing statistic that nobody is boinking in New York City’s glorious public parks anymore. The article cited the paltry statistics that the NYPD only wrote six tickets for “sex in park” last year, compared to 432 in 2007. While much could be said for this decrease in public sex, particularly with the ways in which it is concurrent with the increasing privatization and stratification of New York’s social and geographic landscape, it just makes me sad. As John Waters says, I miss perverts!

This pathetic news also makes me long for the presence of one individual in particular: George Michael. It’s as if with over two years without our Father Figure, we’ve completely abandoned everything radical about cruising. While Michael’s Wham! days seemed cloyingly saccharine and wholesome what with all that waking up and go-go-ing, Michael was never a stranger to public sex, getting caught twice by the law “engaging in a lewd act” in a restroom at Will Rogers Memorial Park in California and in London’s Hampstead Heath. Whether crooning about wanting sex, or dressing up as a hot cop to antagonize his arresting officer in the video for “Outside,” Michael was always a slyly subversive role model. 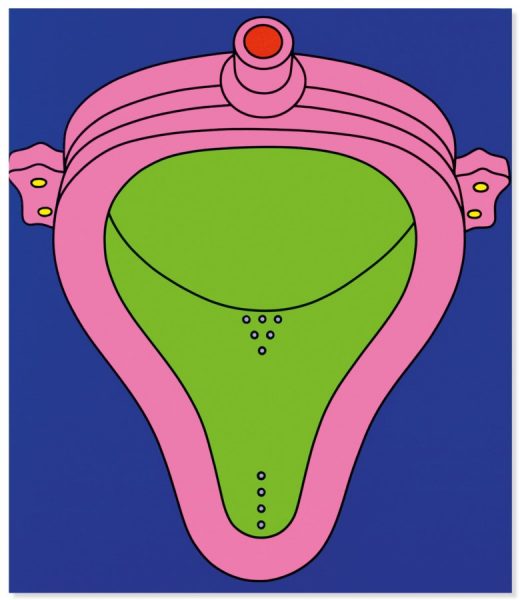 This all goes to say, I’ve been in a George Michael mood lately. And rather than going outside, I’ve been completely obsessed by the upcoming Christie’s sale of George Michael’s art collection. Split into an evening sale, taking place on March 14 in London, and an online sale, held between March 8 and 15, The George Michael Collection is a mania-triggering trip into Michael’s aesthetics. I’ve been clicking bloodshot-eyed through lot after lot, wishing I had the cash to buy Tim Noble and Sue Webster’s lavishly tacky Dionysian light installation The Sweet Smell of Excess.

Admittedly, if you asked me to imagine George Michael’s art collection, the vision that immediately comes to mind would be Greco-Roman sculptures of muscle-bound young men. You know, the kind that would be perfect next to an azure swimming pool on Fire Island or in Gianni Versace’s Miami mansion. But, apparently, according to the works on sale at Christie’s, I was wrong. In fact, there is only one quite tasteful and classical male nude in the evening sale: Horst P. Horst’s Male Nude (Knee).

In fact, Michael’s aesthetic ran way darker than the presumed simple celebration of same-sex desire. I mean, just look at the sheer amount of skulls in the online sale. With themes of death, excess, taboo, sexuality, shock value, filth, and more, Michael owned some seriously and deliciously demented art, with the majority being from the artists associated with the Young British Artists, such as Tracey Emin, Sarah Lucas, and yes, a surprising glut of everyone’s least favorite dots and dead things artist Damien Hirst.

However, it’s not all decadent and depraved. Michael also owned some perfectly lovely Bridget Riley, Cecily Brown, and quite a number of very snooze-worthy sculptures, as well as a few self-portraits including the flower-covered Careless Whisper by Jim Lambie. But, obviously, that’s not what interests me. My fascination runs more toward fantasizing about where Michael put Tim Noble and Sue Webster’s Dirty Narcissus, a jumble of silicone dicks that cast a haunting shadow of profiled faces, or Jake and Dinos Chapman’s existential terror-inducing child sculptures with multiple heads that look as if American Horror Story: Freak Show took place in a museum.

Like the Chapman brother’s mangled mannequins, there’s a black humor that runs through much of the collection. Take, for example, Michael’s chosen Tracey Emin pieces. Rather than the lovey-dovey romanticism of Emin’s more recent neons, popular with art fair-goers and Instagram influencers, Michael went for the startling FUCK OFF AND DIE YOU SLAG that feels as if it is being slurred at you from across the bar. In fact, Michael’s collection has Emin at her absolute sleaziest, including another neon that reads, “When I Think About Sex I Think About Men-Women, Dogs, Lions, Group Sex (And I Love You All).”

Now, I know the urge should perhaps be resisted to make judgments about the buyer through their art collection. The Christie’s folks certainly avoid the topic since they don’t seem to say much about Michael’s collection as a whole in their many catalogue essays, which tend to just rehash a history of the Young British Artists. As the auction house’s Billy Jobling writes: “From kitchen-sink realism to the sublime, from gothic violence to intimate, poetic treatment of sex, love and death, The George Michael Collection offers a nuanced survey of the YBA generation’s achievements. This is a period whose character is too often brushed over with reference to incidents of tabloid shock or outrage. Hirst’s shark and Emin’s bed were undoubtedly major moments–indeed, each finds a distant echo in standout works from this collection–but there is a richer tale to be told about this cohort, and about the wider creative sphere of London at the turn of the millennium.”

While this is undoubtedly true, save that for the museum retrospective! I’m more interested in what The George Michael Collection says about Michael himself, as a collector, as an art enthusiast, as an aesthete, as a creator, as a filth elder and simply, as a person. One undeniable fact is that the themes that obsessed Michael throughout his musical career seemed to also fascinate him in art, from sex to religion and the pleasurably sacrilegious combination of the two. I mean, who wouldn’t want to sing “Faith” in front of Sarah Lucas’s neon coffin New Religion (violet) or Michael Craig-Martin’s Untitled (GOD), portraying the almighty Lord as a day-glo urinal. Hallelujah!

Beyond the tropes found in his music, other works take on new meaning when read in conjunction with Michael’s life. Even Gary Hume’s vibrant yet tranquil In the Park inadvertently reminds me of cruising. And that is exactly what makes The George Michael Collection surpass stuffy, money-hungry and garish art market news. When viewed as an entire body of work, like a lifelong-curated exhibition, The George Michael Collection essentially “queers” any and all artworks included. For example, the preponderance of the typically eye roll-inducing Damien Hirst transforms some of its more tiresome douche bro tactics into something more palatable. Hirst’s dead calf relic Saint Sebastian, Exquisite Pain, for instance, becomes, in context, a decadent rendering of every queer’s favorite put-upon martyr.

But, that isn’t all–The George Michael Collection has many various narrative strands and stories to tell. In fact, it’s a perfect example of the trash aesthetic. Sometimes the trash is literal as seen in Adam McEwen’s New York, New York, a painting made out of discarded chewing gum, which renders the viewing akin to licking the pavement. Other times, the trash is an embrace of bad taste like the self-explanatory Metal Fucking Rats by Tim Noble and Sue Webster or Sarah Lucas’s wood and wire ween O Nob. None of the artworks purchased by Michael would look out of place in a John Waters film.

Beyond the trash aesthetic, there’s also AIDS, or really the lack of art that makes direct, explicit reference to the pandemic. With Michael’s public support of AIDS organizations, his quiet donation to Project Angel Food and the loss of two of his partners to AIDS-related complications, juxtaposed with his own hesitation to speak to his own serostatus despite lots of tabloid rumors, I wondered if Michael collected any art that engaged with HIV/AIDS activism. In his collection, much like his life, the resonance is unquestionably there, with the sheer amount of work conflating sex and death, but only one work–Rankin’s Safe Sex Inspires Me–seems to directly confront anything related to sexual health.

But, perhaps The George Michael Collection is about AIDS, even if it wasn’t purposeful, just like it’s also about queerness and trash. The period in which many of these works were made, in the early 2000s, was undeniably influenced with the effects of living in the pandemic’s wake. For instance, Michael Craig-Martin’s Untitled (SEX) looks an awful lot like General Idea’s AIDS or Gran Fury’s RIOT, both based on Robert Indiana’s LOVE. More than just its resemblance, Untitled (SEX) pairs that three letter-word with objects including a metronome, which in its constant ticking time-keeping, could reference the alternate temporalities that emerged due to HIV and AIDS, as explored by Jack Halberstam in In A Queer Time and Place. This artwork isn’t alone though. Similarly, Wolfgang Tillmans’s Urgency XII, while abstract, is a diffusion of red pigment that could be blood.

Overall, The George Michael Collection feels transgressive, like a covert subversion of the superficial and simplistic chronological art historical mentality typical of auction houses and the commercial art world that only privileges work from major (read: expensive) famous artists rather than the thematic social and cultural statements it contains. More than a look at YBA’s or a particular period of British creative culture, The George Michael Collection feels as if Michael introduced notions of queer trash and the experience of living around HIV/AIDS into Christie’s without them even knowing it, suggesting what an art collection can say beyond merely being understood as an aesthetically pleasing investment.