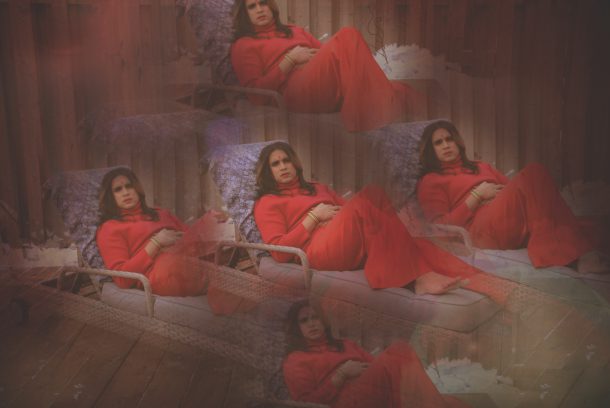 “I think that so often in society in order to belong we have to shrink parts of ourselves,” says Janet Mock at the conclusion of Blood Orange’s song “Dagenham Dream” off of the new album Negro Swan. The writer and activist’s voice flows through the album, tying its disparate parts together with her thoughts on everything from the community of chosen family to the criticism of “doing too much.” Mock’s observation about shielding a part of oneself in order to fit into a phobic society echoes other queer, trans and gender non-conforming folks’ considerations. For example in 2016, Alok Vaid-Menon tweeted a poignant question in 2016, which was quoted repeatedly in madison moore’s Fabulous: The Rise of the Beautiful Eccentric: “What feminine part of yourself did you have to kill to survive in this world?”

This conscious decision to hide, change or alter your body, behavior, relations to others, etc. in order to survive a world built on preferring the masculine, the cisgender, the heteronormative and the white is similarly explored by musician, writer and artist Vivek Shraya in her current exhibition Trisha at the Gallery at the Ace Hotel and the upcoming book I’m Afraid of Men, which is set to be published on August 28 (with a book release on the 27th at the Ace). Coming out publicly as trans in 2016, Shraya, in both her book and series of photographs, shows how this silencing of the proudly feminine and the possibilities that it forecloses is inherited–both within the family and culturally. 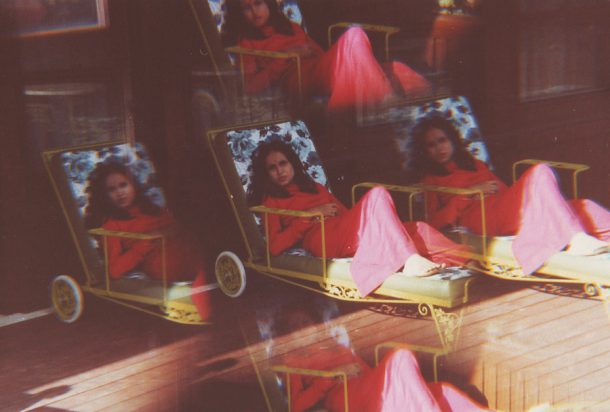 Curated by John Chaich and on view until August 29 (the photographs are also included in a current group show Between at the Portland Art Museum, Trisha is a small exhibition of nine paired images and yet, it provides a wealth of angles to discuss gender, biological family and what changes are made for survival. Titled after the name Shraya’s mother would have given a daughter (though she prayed for sons), Shraya combines smaller vintage snapshots, with the faded nostalgic tone of slides squirreled away in the attic, of her mother from when she was newly married and on her honeymoon with Shraya’s own recreations of these images, replacing her mother’s body with her own. In so doing, Shraya joins artists like Sinan Tuncay and Justin Vivian Bond in embodying a role model figure. While both Tuncay and Bond recreate the physicality of public figures, Shraya looks toward her mother, particularly during this period, as someone to be admired. She divulges her “worship” of her mother in a powerful essay accompanying the show, revealing: “When I take off my clothes and look in the mirror, I see Dad’s body, as you wished. But the rest of me has always wished to be you…I modeled myself–my gestures, my futures, how I love and rage–all after you.”

And looking at the original photographs of Shraya’s mother, it’s not hard to see why. In these images, Shraya’s mother exudes a playful sensuality that is infectious and endearing even if you are, like me, a stranger. In one photograph, she sticks her tongue out at the edge of a body of water, wearing giant sunglasses, while in another, she strolls dreamily down a city street. And in yet another, she is photographed with a kaleidoscope effect in a lounge chair. Not only do the photographs portray Shraya’s mother’s perfection of vintage glamour, but they also reveal the particularities of the South Asian immigrant experience. This lies in the combination of traditional Indian aesthetics like wearing a bindi and North American (really, Canadian) surroundings such as quintessential 1970s wood-paneled walls.

In her photographs, Shraya emulates her mother’s attitude and physicality with uncanny likeness. This likeness was part of the initial impetus for the series, as Shraya explained in Canadian Art: “In the spring of 2015, Toronto multidisciplinary artist Casey Mecija and I were jointly touring our short films. Hers features her father, and mine features my mother. My presentation always included a photo of my mom, at which I would point and say, ‘It’s strange to see how much I resemble her now.’” And it’s true as seen in the sheer accuracy of Shraya’s capturing of her mother’s affect. She nails her mother’s gaze, her exuberance and her barely perceptible self-consciousness, one that lingers in most family photos, as she stares into the camera’s lens.

Now, not everything in these images is exactly the same. There are witty details in Shraya’s photographs that point to the contemporary era. For example, one photograph, featuring Shraya holding an Elmo rather than a worn dog doll like her mother, replaces a family photograph on an old television set with a picture of Mariah Carey. In another photograph, Shraya’s mother speaks on the phone next to an analog clock on a table, which Shraya reinterprets with a laptop projecting the time.

Despite the fun viewing experience of noticing and relishing in these tiny changes, Trisha’s real strength is in its projection of, what Carolyn Dinshaw calls, “a touch across time.” While Dinshaw is referring to a temporal connection between queer figures, Shraya forges a connection between generations of femmes in the biological family. This is a significant move because transness is very often seen as ahistorical–a gender identity and presentation that is set apart from the biological family as an anomaly. Unsurprisingly, this likely contributes to the lack of art that deals with biological family for queer, trans and gender non-conforming folks since the biological family is still often a structure for repression, phobia and rejection for many. However, with her series, Shraya forges a lineage of femininity–and potentially, the inevitable refusal of femininity–through her family line.

By inhabiting these images, Shraya not only constructs a link with her mother now, in the present day, but also with her mother as she was then. In her essay, Shraya describes feeling like she barely recognized the woman in the photographs: “I remember finding these photos of you three years ago and being astonished, even hurt, by your joyfulness, your playfulness. I wish I had known this side of you, before Canada, marriage and motherhood stripped it from you, and us.” Presumably her mother had to change this part of herself in order to fit into the Western definition of womanhood, particularly motherhood.

And similarly, Shraya, as a trans woman, experienced this pressure to hide this part of herself too, making the series not only about intergenerational contact, but also inheritance. The shrinking of bold and unabashed femininity and its embodiment in order to survive in a white heteronormative and cisgender society seems to have been passed down through the family and shaped by the culture. As Shraya observes, addressing her mother, “My story has always been bound to your prayer to have two boys. Maybe it was because of the ways you felt weighed down as a young girl, or the ways you felt you weighed down your mother by being a girl. Maybe it was because of the ways being a wife changed you. Maybe it was all of the above, and also just being a girl in a world that is intent on crushing women.” 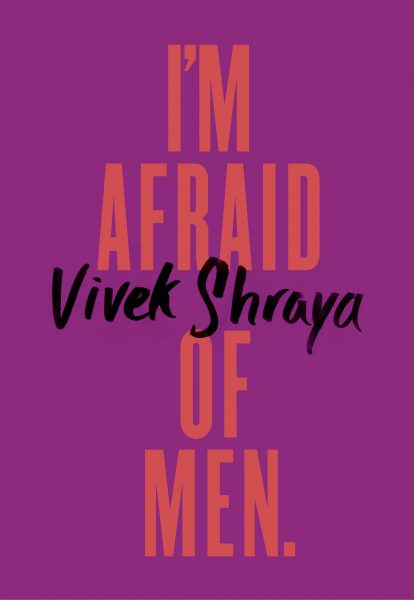 This rejection of femininity is further explored in Shraya’s book I’m Afraid of Men. While small, Shraya packs a big emotional punch as she explores, instance by instance, how toxic masculinity oppressed, terrified and perhaps most devastatingly, formed her throughout her life, from being a brown femme queer child, then a masculine-presenting teen and 20-something desiring men and eventually, as a trans woman.

The book is split into two parts–“You” and “Me.” In this division, the structure echoes Samuel R. Delany’s Times Square Red, Times Square Blue by separating a memoir-esque narrative from the exploration of its theoretical underpinnings in the second half.  I’m Afraid of Men isn’t that cut and dry with personal experiences appearing throughout, but the second half does think more critically about how masculinity, femininity and gender overall could–and needs to–be rethought. 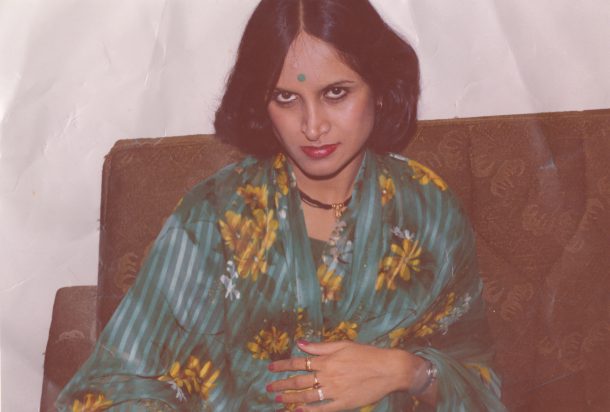 “I’m afraid of men because it was men who taught me to fear,” Shraya begins the book, continuing, “My fear was so acute that it took almost two decades to undo the damage of rejecting my femininity, to salvage and reclaim my girlhood.” From worrying what she wears on public transit for fear of being bashed to being conscious of how she conducts herself with male students, noticing they talk more than the women-identifying ones, Shraya deftly notes how she molds her own behavior and body out of hyperawareness of men–everyday decisions that should be familiar to everyone with marginalized identities who cannot just be who they are in the world out of fear of violence or some sort of retribution.

In “You,” Shraya goes through a chronological account of the occasions in which she was too femme, too brown, too queer, too trans, not femme enough, not gay enough, and not masculine enough, including a particularly devastating scene involving her mother’s powder blue Jordache jacket. Connecting the book to the themes in Trisha, the 1980s-style femininity represented by that jacket and her confidence with which she wore it to school is harshly and painfully rejected as she gets spat on by a dude and his cackling girlfriend. You just want to reach back in time and slap him (and her). In this instance, Shraya’s love of her mother’s aesthetic and desire to inhabit this same sort of femininity is seen as “other” and thus, open to debasement. However, it’s not only school age traumas–Shraya also exposes how she manipulated her body to be more attractive to gay men, camouflaging herself in masculinity. But, she was also queered by race. “My brownness turns out to be a form of queerness in and of itself and makes me too queer for gay men,” she writes.

While she appropriately poses the question: “Why is my humanity only seen or cared about when I share the ways in which I have been victimized and violated?” Shraya reveals in “Me” the need for a reconsideration of how we approach gender. The bravery to not exist according to the gender binary system should be celebrated and not either feared or made to fear. Ultimately, I’m Afraid of Men is about breaking down how fear of the feminine, as well as the non-binary limits everyone. As she concludes, “Consider how often you have dismissed your own appearance, behaviors, emotions and aspirations for being too feminine or masculine. What might your life be if you didn’t impose these designations on yourself, let alone me?”

Throughout the book, like her previous question, Shraya uses “you” as a rhetorical device to implicate the audience as the presumed dominant white cisgender straight readership. While the reader may not, in fact, conform to these identities, the truth is that we all participate in the system that renders masculinity as seen as the “real,” while femininity, transness and the non-binary are looked down upon and repressed. And taking Shraya’s exhibition and book in conjunction with Mock and Vaid-Menon’s observations, when all these black and brown trans and gender non-conforming people are asking the same question of us, it’s time to listen.