Party Out Of Bounds / Trash

In our constantly accelerating culture of crazy from Trump’s Twitter tirades to Nunes’s nonsense memos to art world shenanigans like deciding xenophobic border wall prototypes are “art,” it can be difficult to find time to pause and reflect. But, sometimes the most ridiculous historical moments can have chilling contemporary resonances. Case in point–the late 1970s disco backlash that culminated in the bizarre and eerily fascist Disco Demolition Night at Chicago’s Comiskey Park on July 12, 1979.

Reminded of this moronic moment in American cultural history by my colleague, curator John Chaich, Disco Demolition Night began as a radio promotion and ended as a riot, thanks to a bunch of angry straight white male “rock” fans who lost their minds over disco records. That’s right…disco. They were whipped into a frenzy by a charismatic chubby leader who used virulently anti-disco hatred (read: racism, homophobia and misogyny) to drum up his own popularity. Sound a bit familiar? Yes, it does to me too. Switch out the disco albums for Party City and these goons would be identical to the ones marching around in our Trump-ian era.

So given this resonance, I thought it would be worth taking a trip down disco-loathing memory lane. Who could hate disco, you say? Don’t ask me! How could anyone deny the over-the-top allure of Filthy Dreams’s role model Donna Summer? Or the falsetto wail of Sylvester? Or the campy excess of The Village People? Mouth-breathing party-poopers, that’s who.

Also angst-ridden young straight white men, who between the advances made in Civil Rights, Gay Rights and Women’s Rights in the 1960s and 1970s, were paranoid about their lessening grasp on power in the country at large, so they globbed onto the one thing they thought they had control over–the radio, conflating disco with these liberation movements. They weren’t necessarily wrong to make that connection. As Alice Echols writes in her Hot Stuff: Disco and the Remaking of American Culture, “The 1970s are associated with identity politics, but they were also a time when numbers of gay men, African Americans and women ditched predictable social scripts. Disco played a central role in this process, which broadened the contours of blackness, femininity and male homosexuality” (xxiv-xxv).

So these furious fans, like the forefathers of 4chan, galvanized behind the witty slogan “Disco sucks!” Besides being more than a bit unimaginative, this slogan had decidedly homophobic undertones. In the BBC’s disco documentary The Joy of Disco, Nelson George prompts viewers, “Think about what they’re talking about.” Tim Lawrence similarly sees the connection in Love Saves The Day: A History of American Dance Music Culture, 1970-1979, asking, “Disco sucks…what? Did it suck innocent listeners into its seductive rhythms? Did it suck the ‘real’ rock music industry dry? Or did it suck cock?” (377).

Of course, by the late 1970s, these rock fans weren’t the only ones who resented disco, which had become increasingly commercialized and bland. Even some disco fans were becoming wary of the genre–or at least, skeptical of what was being played on the radio rather than in the clubs. Some of the backlash also came from religious zealots like Anita Bryant who frantically “warned that homosexuals were ‘producing [disco] records with double meanings…then having ‘straight’ children buy them’” (204). That’s right, Anita, YMCA is a conspiracy to turn your children GAY!! *puts on jaunty tinfoil hat*

However, Alice Echols explains, “In the end, the people who organized the most effectively against disco were not religious conservatives but deejays employed by classic rock or album oriented stations” (205). She recalls a couple particularly egregious examples: “Perhaps the first rock deejay to make discophobia a part of his shtick was Dennis Erectus of KOME in San Jose, California. According to Village Voice writer Frank Rose, Erectus would put on a record, ‘play a couple of bars, then crank the turntable up to 78 rpm (especially effective on Macho Man), grind the needle into the vinyl, play sound effects of toilets flushing or people throwing up and follow it up with the searing guitar chords of Van Halen or AC/DC'” (205).

Shockingly, others were even worse:

“Two deejays at Detroit’s WWWW formed an anti-disco vigilante group called Disco Ducks Klan. They were laying plans, which were later aborted, to wear white sheets onstage at a disco that was switching back to rock. At their next job, at AOR station WRIF, they performed on-the-air ‘electrocutions’ of disco lovers whose names and phone numbers had been sent to the station by members of the ‘intelligence’ arm of DREAD (Detroit Rockers Engaged In The Abolition Of Disco).” (Echols 205).

Which brings us to shock jock Steve Dahl and his vendetta against disco, which led to the ill-fated Disco Demolition Night. Dahl’s distaste for disco was personal. He was fired at a local station WDAI during its switch from rock to disco. Can’t fight the music, Steve! Hired by a competing rock station WLUP, he used this platform as a bully pulpit for his anti-disco hostility, creating an “anti-disco army” called the Insane Coho Lips. This army was “dedicated to the eradication of the dreaded musical disease known as disco.” Nothing says a lighthearted joke like military lingo and threats of eradication.

Before the Demolition Night, Dahl racked up some anti-disco stunts including destroying Van McCoy’s iconic “The Hustle” record on air after the singer’s sudden death. He also encouraged his army, which ballooned up to 10,000 members, to toss marshmallows at The Village People. I’ll admit that one is hilarious. 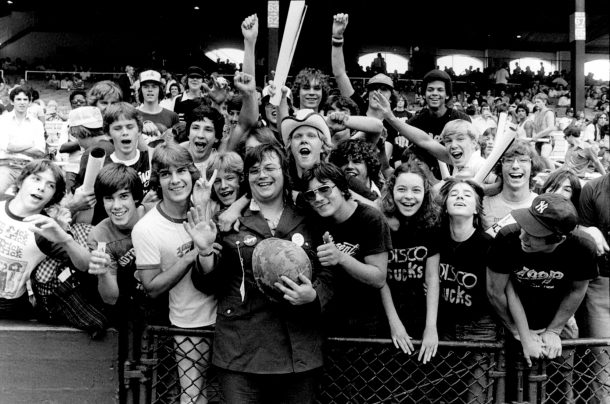 July’s Disco Demolition Night was the logical end to this madness. A moronic ploy for publicity gone wrong, the Night was organized in part to up the ticket sales for a slow White Sox season. A double-header between the Chicago team and the Detroit Tigers, the stadium offered fans 98 cent tickets if they brought their least favorite disco record to be blown up mid-field. I mean, who could have guessed something would go awry?

Even though Dahl was worried about attendance, up to 70,000 raging white folk poured into the stadium out for blood because of….disco. The rest is a historically absurd spectacle. Fans whipped disco albums into the field like ninja stars, people flew banners emblazoned with “Disco Sucks” and Dahl marched around the field in a military helmet yelling, “This is now officially the world’s largest anti-disco rally! Now listen—we took all the disco records you brought tonight, we got ’em in a giant box, and we’re gonna blow ’em up reeeeeeal goooood.”

Which he did. Dahl exploded a crate full of disco records midfield, which, naturally, damaged the field, forcing the subsequent game to be canceled. Not satisfied by these pyrotechnics, a drunken disco-detesting mob flooded the field and had to be eventually dispersed by riot police. It also made for some hysterical GIFS:

And look, I’m not opposed to explosions, chaos or riots, but it could have just used a little more confetti and a little less phobic intentions.

Dahl, for his part, consistently denies homophobic or racist undertones to this riot. He explains in his book Disco Demolition: The Night Disco Died, “I’m worn out from defending myself as a racist homophobe for fronting Disco Demolition at Comiskey Park…The event was just a moment in time. Not racist, not anti-gay….It is important to me to have this viewed in the 1979 lens…that evening was a declaration of independence from the tyranny of sophistication.”

Uh huh…that’s a hard argument to make considering some of his on-air antics. As Alice Echols reminds readers, “If Dahl’s listeners didn’t know that disco was associated with gay male culture, they did after listening to the deejay who always made a point of lisping the word disco” (205).

“The consensus among historians and discographers is that the backlash against disco reflected anger and frustration with America’s changing sexual and racial rules,” observes Echols (209). At the time, David Marsh explained in Rolling Stone: “white males, eighteen to thirty-four are the most likely to see disco as the product of homosexuals, blacks and Latins, and therefore they’re the most likely to respond to appeals to wipe out such threats to their security. It goes almost without saying that such appeals are racist and sexist…”

And imagine the alt-right and other young Trump supporters think they’re doing something new. Like the alt-right’s 4-chan, Reddit, Breitbart, Russian bots on Facebook and other creepy parts of the Internet, these dude-bros harnessed the popular medium of the 1970s–radio–to deliver their angry put-upon message. As Studio 54 DJ Nicky Siano recalls in Love Saves The Day, “After almost ten years of gay white men and gay black men pretty much owning the scene, heteros wanted to take their power back. Disco was very threatening for a lot of men” (378). 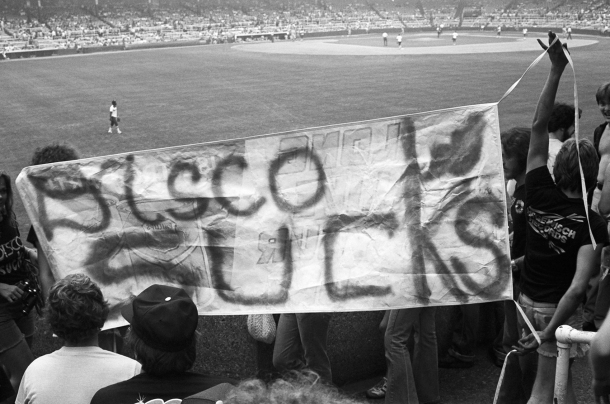 Disco Demolition Night and other anti-disco events also, like our right wing lunatics now, had a fascist bent. Tim Lawrence details in Love Saves The Day, “Yet the Comiskey Park gathering also had its less comic side, echoing as it did the fascist rallies of the 1930s and 1940s, and on this occasion, it was Dahl, dressed up in army fatigues and a helmet, who played the role of the charismatic, knowledgeable and power-hungry conductor” (376). Lawrence specifically ties this disco backlash to the election of Jimmy Carter and the subsequent rise of Reagan and the “New Right,” which he describes as “a group of conservative voters who coalesced around a series of volatile issues that had become associated with the so-called excesses of the 1960s and the subsequent attack on what conservatives interpreted as the most basic institutions and values of American society” (379).

Now, I’m not the first to realize this connection between disco haters and the alt-right. Even before the horror of a Trump presidency and Nazis marching around Confederate sculptures was a reality, The Daily Beast’s Arthur Chu made a connection in 2014 between the disco backlash and #Gamergate, the convoluted gamer controversy that fueled the rise of Milo Yiannopoulos’s quickly fading career. In “Of Gamers, Gates and Disco Demolition: The Roots of Reactionary Rage,” Chu poses, “Is it a coincidence that Disco Demolition Night happened almost exactly 10 years after the Stonewall Riots, nine years after the first issue of Ms. Magazine, six years after the election of the first black mayor of Los Angeles, three years after Gerald Ford officially recognized Black History Month?”

It’s also not a coincidence that now that we keep seeing the same angry straight white dudes worried about their fragile supremacy against women, queers and people of color. As Chu writes, “Same song, different lyrics. Different battlefield, but the same ‘culture wars,’ the same sides.”

And in case you’re wondering, despite these yahoos’ claims, disco will NEVER die!