“Therefore pass these Sirens by, and stop your men’s ears with wax that none of them may hear; but if you like you can listen yourself, for you may get the men to bind you as you stand upright on a cross-piece half way up the mast, and they must lash the rope’s ends to the mast itself, that you may have the pleasure of listening. If you beg and pray the men to unloose you, then they must bind you faster”–Homer, The Odyssey

This week, I spent a little too much time attempting to be Tracker McDyke, an aptly named lesbian private eye searching for a trans woman Tessy LaFemme in the 1980s video game Caper in the Castro. The landmark first LGBT-themed video game, Caper in the Castro was long assumed to be a lost relic–gone the way of the 8-track and LaserDisc

But, the Internet Archive recently got their hands on a copy courtesy of floppy disks found by the game’s developer C.M. Ralph, who sent the game to Andrew Borman, the Digital Games curator at the National Museum of Play in Rochester. Created as “CharityWare,” encouraging players to donate to an AIDS charity of their choice, Caper in the Castro takes players through the gay-borhood as Tracker finds herself in the center of a larger conspiracy, which includes, of course, several bars.

Experimenting with the game on and off all week, I realized I would make a terrible detective. Good thing I’m not alone. In her memoir M Train, Patti Smith frequently muses about her favorite procedural crime dramas, concluding, “I wondered if I would have been a good detective. It kills me to say it, but I don’t think so” (211). Same, Patti, same.

Despite making a terrible candidate for a gumshoe, Smith, through M Train, succeeds in making me feel a lot better about my particularly deep obsession with procedural crime dramas. Patti, it seems, loves to binge-watch these hour-long tidbits of trash too. As she describes, “The city was deserted, just the way I like it, and there was a new episode of The Killing on Sunday. I decided to visit Zak’s café on Monday and spend the weekend in the city with Detectives Linden and Holder. My room was in a state of complete disarray and I was more unkempt than usual, ready to be comrade to their mute misery, swilling cold coffee in a battered car during a bleak stakeout coming out equally cold” (127).

If it’s good enough for Patti, it’s good enough for me. From Criminal Minds to Patti’s fav The Killing to my personal love Law & Order SVU, I’ve binge-watched them all. And also fell head-over-heels in love with their characters, in particular SVU’s Olivia Benson. Of course, the trope of the hardened, hard-boiled and often hard-drinking detective is often restricted to men. But, characters like Olivia or even, Caper in the Castro’s Tracker McDyke approach this age-old trope with a twist–the staunch lady detective. It’s no surprise these ladies often become cult figures. Just Google Olivia Benson fan fiction and you’ll see. Or on second thought, don’t.

Between Patti and my peculiar fondness for this genre of television, I had to wonder–what is so alluring about these shows? Is it their formulaic plot? Their quick and easy conclusions? The consistency of the characters? The ability to voyeuristically and creepily flirt with gruesome crimes without having to experience them?

The undeniable truth, though, is it’s not just me or Patti Smith. We, as a culture, are completely and totally fixated with procedural crime shows. And it’s this fanaticism with procedural crime dramas as a whole and lady detectives and police officers more specifically that artist Dawn Mellor takes aim in her current exhibition Sirens at Team Gallery. Rather than focus on their American counterparts, Mellor’s exhibition is filled with the faces of actresses from UK procedural shows like The Fall, Happy Valley and Broadchurch.

The show’s title Siren is a not-so-subtle play on words, referencing both the loud wail of a police car, as well as those seductive and sociopathic songstresses from The Odyssey. In Mellor’s hands, though, strapping Odysseus to the mast wouldn’t have helped much since these painted sirens are waterlogged, submerged chest-deep in water. Whether frozen or floating in an idyllic lake like Police Constable Leela Kapoor (Seema Bowri), all the women still sport their proper buttoned-up uniform.

Walking into Team Gallery, a singular row of paintings confronts the viewer like a line-up or a perp walk of policewomen. For someone like me who watched many of these shows, these faces are quite familiar. Their surreal scenarios, however, are not.

Take, for example, Detective Superintendent Stella Gibson (Gillian Anderson), which depicts Anderson’s character from The Fall. In the painting, Gibson/Anderson, with her blond thousand-yard stare, floats in a sea full of dead fish. Her face is covered by a fishnet that is hung with many feathered and striped lures. It also appears as if a fish’s tail is coming out of her mouth (a snack?). The scene is wonderfully jarring, especially when compared with the pulled-together detective.

The other portraits are just as confounding. In one painting, Police Constable Norika Datta (Seeta Indrani) has a gun slung over her eye like a half-Terminator as a colorful leaf hangs from her mouth. While in another painting, Detective Superintendent Ellie Miller (Olivia Colman) from Broadchurch stands in a scenic landscape while her hat erupts into flames. Even still, she appears unmoved. Perhaps the most bizarre–and darkly hilarious–is Police Constable Kate McFay (Maxine Peake) who seems to be gnawing on a finger, one of many that line the painting’s foreground like a fence of disembodied digits.

Are these women drowning? Frequently in these television shows, the detectives–no matter how stoic–are symbolically drowning in their own personal and professional chaos. But here, Mellor refuses the easy answers or obvious plot devices that are typical of these procedural dramas. Police Constable Sally Armstrong (Alexandra Louise Bastian) shines a flashlight, while Police Constable Jamilla Blake (Lolita Chakrabarti) from the long-running The Bill presses her ear to a brick wall. But, by leaving their context ambiguous, the policewomen and lady detectives’ investigations remain, like the water they stand in, murky.

Instead, we are left to consider the allure of these characters, as well as their shows themselves. There is something unsettlingly seductive about Mellor’s subjects, covered in netting, garter belts, fishnets and strips of leopard print fabric. The exhibition, as a whole, seems to be a critical love letter to these shows’ draw and continued popularity.

Mellor weighed-in on her curiosity about these dramas in an article with Artsy: “I grew up with TV as a babysitter, and was aware of the dominance of cop and crime narratives and their popularity as a genre amongst my working-class friends and family…But I’m interested in understanding why they remain popular—and in using cop shows as potential points of access or reference in my work for people who may not usually engage with art.” 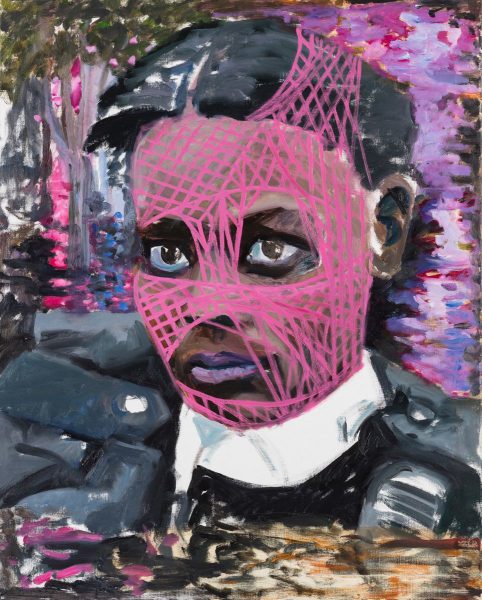 In Sirens, Mellor seems to leave viewers with a series of questions on the attraction to these procedural crime shows. What does it mean to root for and adore these characters? Are these shows a way to make viewers see law enforcement in a more positive light or is it simply good vapid, innocent entertainment? Similarly, what does it mean to be, at once, critical of law enforcement, especially the institutionally sanctioned violence and murder of unarmed people of color, while still enjoying these shows?

It’s a strange and possibly dangerous line to straddle, much like the siren’s beckoning call. As Circe tells in The Odyssey, “First you will come to the Sirens who enchant all who come near them. If any one unwarily draws in too close and hears the singing of the Sirens, his wife and children will never welcome him home again, for they sit in a green field and warble him to death with the sweetness of their song.”