But a deltoid and a bicep, a hot groin and a tricep
Makes me shake, makes me wanna take Charles Atlas by the hand
In just seven days I can make you a man
–“I Can Make You A Man,” The Rocky Horror Picture Show

Walking through Anton Kern Gallery’s exclamatory (and inflammatory) current exhibition Drawings By Mike!, I had to stop myself from sighing like Tim Curry’s Dr. Frank-N-Furter, “Oh ROCKY!” That urged bubbled up from deep within while viewing drawing after drawing of impossibly tanned, blonde and muscular figures scattered on the walls of the gallery’s chic 55th Street space, which gave its top floor over to deliciously lurid trash. Resembling Dr. Franky’s hunky creation Rocky, the drawings, made by influential underground filmmaker and heroic master of sleaze Mike Kuchar, depict an overblown masculine ideal–one that is uniquely infused with Kuchar’s trademark camp sensibility.

And this is a rarity for, as David M. Halperin theorizes in How To Be Gay, the beauty and the camp almost never, if ever, come together. In his chapter “Why Are The Drag Queens Laughing?”, Halperin traces this frequent–though decidedly anachronistic–divide in gay culture between beauty and camp. This concept is largely based on an ethnographic observation made by Esther Newton in her seminal drag queen study with an envy-inducing title Mother Camp. Newton explains, “At any given homosexual party, there will be two competing, yet often complementary people around whom interest and activity swirl: the ‘most beautiful,’ most sexually desirable man there, and the ‘campiest,’ most dramatic, most verbally entertaining queen…In neither is it likely that the two virtues will be combined in the same person” (56).

While I should preface Kuchar’s decades of deliciously deviant work, most Filthy Dreams readers will know Kuchar from his films–whether his own or his collaborations with his brother George, billed as the Kuchar Brothers. With films like The Naked and the Nude, A Tub Named Desire and Hold Me While I’m Naked, the Kuchar Brothers, making films together from the 1950s to the 1970s, were the filth elders to OUR filth elders like John Waters and Nick Zedd. Beyond their “cinematic cesspool,” the Kuchar Brothers both have also worked in illustration like friends Art Spiegelman and R. Crumb. Closer to the gay pin-ups seen in the 2014 group exhibition Stroke at the Leslie-Lohman Museum than traditional comics, Mike Kuchar’s illustrations have been featured in aptly named 1970s comics like Gay Heart Throbs and porno mags like Manscape.

Seen in Anton Kern, Kuchar’s illustrations aren’t the uber-serious, gritty black-and-white leathermen of Tom of Finland. Instead, Kuchar’s vibrantly colored drawings seem to take inspiration from more mythical fantasies than biker bars and prison gangs (though there is one prison scene). Kuchar’s Adonis-es flit through numerous clichéd scenes from pirates to Greek gods to hayseed-chewing farmers and naturally, Tarzan. Even the titles are incredibly campy, particularly when juxtaposed against the boredom-inducing “Untitleds” of Tom of Finland, which I always thought could use some sprucing up. Some of the titles range from “Party Time!,” which depicts a celebrating old man peeking into the pants of a more virile one, and “Facing One’s Own Demons,” featuring a man conjuring his devil and coyly playing with its tail. 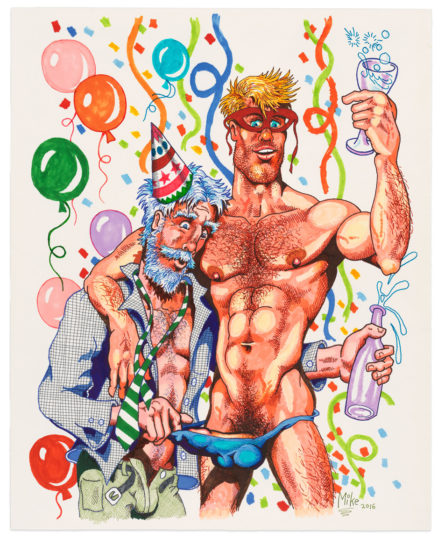 In many ways, Kuchar’s illustrations seem to mirror his fascination with transforming stereotypical Hollywood tales into transgressive camp in his infamous cult films. Take, for example, one of his most famous films–his 1965 Sins of the Fleshapoids, which depicts the human race descending into fall of Rome-esque decadence. As the humans party in their lush and lavish surroundings, their android servants eventually overtake them.

Similar to Kenneth Anger’s Technicolor debauchery, Kuchar’s Sins of the Fleshapoids takes a–or many–tropes and turns them on their head. Kuchar describes his campy aesthetic motivations in Dazed: “For me ‘camp’ means that you set up your tent on some established recreation ground–in this case Hollywood–and you have a little fun with it. It’s about taking the language of movies and making it so overblown it’s glorious.”

Kuchar’s illustrations satirize similar scenes, while still paying tribute and nailing their pornographic goal. Now, there is something to be said for just how Caucasian Kuchar’s idyllic bros are and yet, as he’s satirizing all these various tropes, it feels appropriate that he would also be satirizing the eroticism of the oversized white muscle man.

Some of the works even resembles his films. For example, the flower crown and lute-playing men in Pagan’s Picnic strongly resemble the fairy flitting around Kuchar’s 2008 film The Faery Garden, which presents a prancing fairy boy with a flower crown who romances an (perhaps dying) old lady comrade/lover. Even though it depicts a ghostly (and a bit ghastly) heterosexual coupling, it’s one of the queerest films I’ve ever seen. Marie Losier also makes the connection, reflecting, “If you look at Mike’s muscular drawings of men with giant penises in fairytale landscapes, surrounded by peace and joy, pleasure, you’ll find the same in his films!”

What makes Kuchar’s illustrations, as well as his films, truly unique is his combination of beauty and camp, which he fearlessly dives into. While Kuchar’s figures are clearly hyper-hyper-etc.-etc.-masculine, they are also undeniably campy. I mean, even the genitalia in the drawings are rendered campily. Frequently red at the tip and not to mention enormous, they’ve got a lot of…ahem…personality that’s hard to ignore.

Camp, according to David M. Halperin, in gay culture is a style and an aesthetic frequently associated with the feminine. In contrast, beauty is always masculine and never, ever ironic. “Beauty, because it is the object of sexual desire–because it is hot–has nothing intrinsically ironic about it. Gay male culture takes it very seriously. Beauty evokes literal, witless, pathetically earnest longing, the sort of longing that has no distance on itself and no ability to step aside and look critically at itself from an alienated perspective,” observes Halperin (207).

This is the wonderful conundrum taken on by Kuchar’s imagery. On one hand, a viewer can interpet the works very literally–lusting over the perfect bodies, giant penises and tousled blond hair if they so desire (or can’t help themselves). However, Kuchar’s drawings aren’t without irony as seen in the work City Fever. A naked man sits in a field full of flowers, flanked by an adorable rabbit and a squirrel, with a bird alighting on his arm like a gym bunny Snow White. While plopped in this lovely nature scene, the figure dreams of a raunch-filled city as represented by an “X-rated” sign and a threesome of men smooching. It’s nothing less than hilariously camp and definitively beautiful.

As David M. Halperin writes, “The camp’s role is to puncture the breathless, solemn, tediously monotonous worship of beauty, to allow the gay men who desire and who venerate beauty to step back ironically from their unironic devotion to it, to see it from the perspective of postcoital disillusionment instead of anticipatory excitation …Camp is about deflating pretension, dismantling hierarchy and remembering that all queers are stigmatized and no one deserves the kind of dignity that comes at the expense of someone else’s shame.” (207). And in combining beauty and camp, Kuchar widens his audience beyond those that appreciate only a stereotypical gay beauty. “Camp,” as Halperin explains, “is inclusive and democratic, why it implies a world of horizontal rather than vertical social relations. And that is why it both presumes and produces community” (207).