In her book Sensational Flesh: Race, Power and Masochism, Amber Jamilla Musser (who I should mention was my professor at NYU. Hi Amber!) asserts that “masochism is a powerful diagnostic tool” (1). She explains, “Usually understood as the desire to abdicate control in exchange for sensation–pleasure, pain, or a combination thereof–it is a site where bodies, power and society come together in multiple ways. It can signal powerlessness, domination or ambivalence depending on one’s point of view” (1). This multifaceted potential of masochism to expose bodies, power and society was undeniably on view at Paddles on April 27 and I left Sexual Fragments Absent with numerous ideas spinning through my head–an indication of an expertly curated show. So I’m going to attempt to flesh out some of these ideas here: 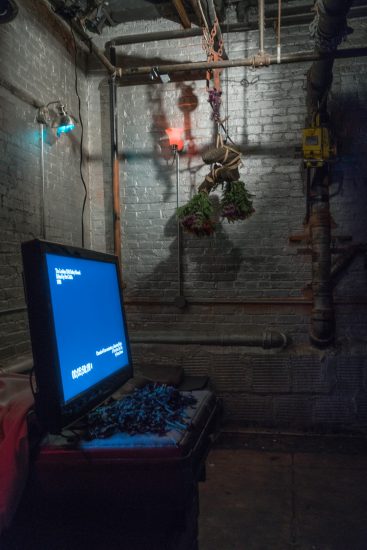 Histories of Space and Bodies

Before I even get into the real crux of the exhibition, the experience of Paddles alone became essential to Sexual Fragments Absent. Approaching an open door on 26th Street, I walked down the basement stairs through a cement block-lined hallways into the main space of Paddles. The entryway of the space was lined with flyers from past and upcoming parties and events, which ranged from Bear-centric to “Short Cummings”–a party for, you guessed it, short men. And even though it was very clean with giant bottles of hand sanitizer on the bar, the place, illuminated in red with an epic Tom of Finland-esque mural, just oozed sex and other unmentionable acts practiced within its interior.

It also oozed history. Opened in 1984, Paddles is the oldest remaining dungeon from that leather-strewn era of the 1970s and 1980s. As the last space standing, being in Paddles almost became a representation of that lost era with numerous storied clubs closed either by the Health Department during the height of the paranoia surrounding HIV transmission or just by gentrification and the movement of kink and fetish communities online. Paddles, by proxy, stood as a monument to the Mineshaft, the Anvil, the Hellfire Club and others. And maneuvering through its labyrinth-like interior to discover the art, it was nearly impossible not to imagine the bodies that, at one time, inhabited this space, as well as the other clubs. It also helped that I watched a video by Nelson Sullivan prior to attending the event, which featured a young RuPaul, as well as other club kids like Lahoma Van Zant and Michael Alig, partying at Paddles in the 1980s.

This history was not lost on Onyewuenyi, who chose the space as a way to engage with this legacy of contact. Speaking to him after the exhibition, Onyewuenyi cited Samuel Delany’s Times Square Red, Times Square Blue as an influence to hold the show at a space like Paddles. “I was thinking about all these queer social spaces that invite contact–an interclass contact,” he said. While envisioning several other spaces from a hotel known for sex work to a truck on the piers, he eventually decided on Paddles.

Should This Sado-Masochism Be Saved

In her “A Letter of the Times or Should This Sado-Masochism Be Saved?” Alice Walker depicts a professor’s horror at watching a S&M documentary in which a Black women calls herself a slave. “This reading of black femininity as a site of perpetual duress and domination precluded the possibility of reading submission as anything but violent and painful,” observes Amber Musser in Sensational Flesh. “As Walker makes clear, S&M toggles between domination between individuals and domination on a macro scale” (45). Lorde presents a similar refusal as Walker, understanding, as Musser notes, “black women are seen as representatives of their race…” (172). For both Walker and Lorde, the pull of historical traumas is too great to ever have BDSM as a site of reclamation for Black women.

Because of this, Amber Musser articulates that sexuality “has been foreclosed as a space for black women” (172). It’s this foreclosure, which makes the work in Sexual Fragments Absent such a powerful rebuke of this notion. The works in Sexual Fragments Absent don’t outright dismiss Walker or Lorde’s concern with the historical legacy of these acts, instead, they present a complex engagement with these histories, their fraught dynamics and the potential power in consent-driven, self-objectification. As Onyewuenyi writes in his catalogue essay: “These ironic pangs of excitement and pleasure in BDSM highlight how black women BDSMers further kink enacted binaries of black/white, master/ slave, dom/sub, fantasy/reality, pleasure/pain, mind/body, but in ways that deviate—or bend—from black feminist positions on respectability and cultural dissemblance vis-à-vis black female sexuality” (9).

The Flesh Made Word

“Flesh connects bodies to the external world by emphasizing the various conditions that make bodies visible in particular ways; it is about power and difference. Historically, flesh is the province of marginalized subjects,” states Musser. Like Musser’s assertion, many of the works in Sexual Fragments Absent emphasize the flesh, namely Doreen Garner’s included works.

One of the first pieces I saw as I oriented myself to the winding interior of Paddles was Garner’s sculpture Untitled: Strange Fruit hanging from the ceiling. Looking like a slab of meat, reminiscent of the old Meatpacking District’s original industry, the sculpture is covered in dressmaker pins, rendering the piece quite dangerous if you didn’t notice it in the darkness of Paddles. Made from silicone, hair weave and surgical instruments, as well as the pins, the hunk of flesh even has a little pink vagina on one side, which looks like, with the pins, a vagina dentata.

This abject form, at once disgusting and alluring, seems to relate to Musser’s description of flesh in Sensational Flesh. She explains, “This dismembering of bodies into flesh is part of the equation of blackness with depersonalization and nonsubjectivity. Spillers argues that this traffic in bodies…marks the production of flesh as a tactic of domination. Flesh connotes objectification, woundedness and a lack of agency. Yet dismissing it is also problematic” (20). Garner’s Untitled: Strange Fruit, as well as the similar Untitled: Bondage, which sat like a medical experiment on a nearby table, recalls the fetishized and objectified medicalization of Black bodies. And yet, as Musser articulates, flesh cannot be dismissed and it is, as she writes, “a territory ripe for reclamation” (20).

“The difficulty in taking on flesh, however, stems from the fear that objectification reifies identity and essentializes subjects in particular ways,” Musser writes (20). This tension between objectification and reclamation is perhaps most visible in Garner’s unforgettable performance The Observatory. Garner herself originally performed the piece in her studio, but here, she enlists the help of Kiyan Williams to perform the work.

Located in the loft space, up a winding staircase, Williams confronted viewers sitting in a vitrine covered with hair, condoms stuffed with hair, and glitter. With the stuffed condoms, it looked like they were sitting in a box full of entrails. If that wasn’t unsettling enough, they locked her gaze firmly on the viewers, staring at individual viewers for a long period of time. While the vitrine certainly made it seem as if they were the fetishized object, it was very clear from their gaze and movements that they had the power–not the observers taking photographs for their Insta Stories. The object, in this case, looks back.

My placement within the piece as a white viewer was purposefully fraught. As Ariel Goldberg asks, recalling their experience at Dirty Looks’s screening Misadventures in Black Dyke Dating in the 90s in The Estrangement Principle, “How to reckon, as a white person, with constant realities and histories of the white voyeur, white colonizer, and white appropriator?” (181) By recalling those troubled and continuing histories of the white colonizing gaze, Garner’s piece took back the power, asserting that an renunciation of power can be a potent choice as well. Garner’s The Observatory represented a self-objectified return to and reclamation of the flesh.

The visual exchange between performer and viewers in Garner’s The Observatory was further emphasized in Shawné Michaelain Holloway’s video installation a:active, a:hover { or position: unavoidable;, which was screened on the TVs placed throughout the space.

As words such as “HOW MUCH CAN I FIT INSIDE YOU” and Blingee hearts fill the screen, one image in the videos particularly sticks with me, featuring Holloway inserting a speculum into her vagina, opening herself up to the camera as it zoomed in and out. This part of the video recalled Annie Sprinkle’s famed performance A Public Cervix Announcement in which she allowed viewers to stare into her cervix. Unlike Sprinkle, though, Holloway’s video gives viewers no release–she, holding the camera, maintains the control, positioned behind the screen out of reach and out of touch. 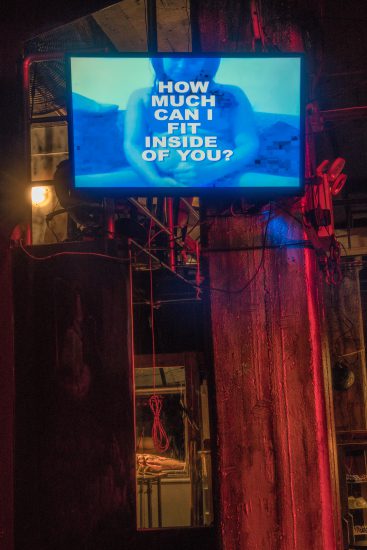 Referencing camming, a form of sex work she’s previously practiced, the video continues as Holloway sticks dollar bills into her vagina. This plays on the fraught levels of exchange between viewers and sex workers or performers. As Holloway writes on her website, “Who or what controls who’s arousal? Who gets paid? Are there different kinds of currency used for pay-outs? Who gets what kind of currency–is it all equal?”

“Something I was cognizant of was the relational space,” Onyewuenyi told me, “I didn’t want to place too much work in the space. I wanted people to be in there, be comfortable and vibe out.” And he succeeded. Sexual Fragments Absent felt like a–and I hesitate to use this phrase–safe space, filled with primarily Black and other POC, queer and femme attendees. This is still a rarity in the art world and even rarer in a queer-related art show, where I’m often one of (if not the only) woman-identified person there.

But, even more than just the mixed crowd, the position of Holloway’s videos allowed for unexpected contact between visitors. As Onyewuenyi writes in his catalogue essay on Holloway’s video, “To watch this video is to almost always share the gaze with another, providing a common vocabulary with which to ignite an interaction. Scattered about the clubhouse, the four videos are conversation pieces as much as they are live bait, drawing out curiosity and arousal. In a way, by watching a:active, a:hover { or position: unavoidable;, a new understanding of proximity and vulnerability can be felt as a result of looking at what many might consider taboo images of black female sexuality” (30). And in some respects, the relational space created within Paddles presents a fascinating juxtaposition with the technological, digital and monetary exchange between viewer and subject in Holloway’s a:active, a:hover { or position: unavoidable;.

Sometimes When We Touch 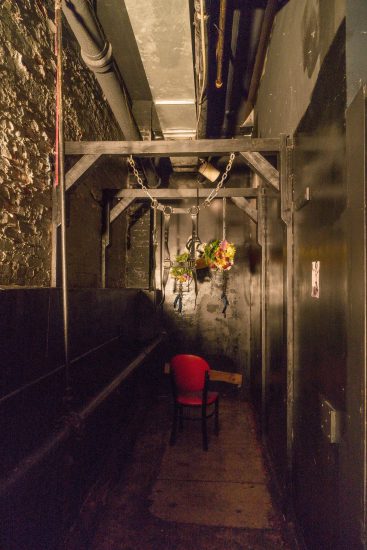