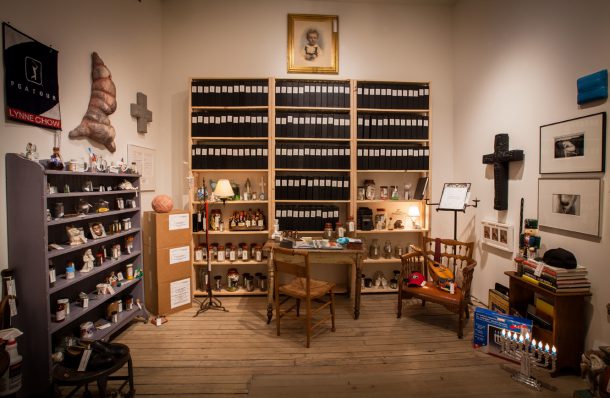 How do you measure a life? Through jars full of trash gathered during trips to Bourbon Street, Rodeo Drive and the King’s mecca, Graceland? Through a smattering of graveyard dirt collected from the graves of loved ones? Through precisely written tags on toothbrushes and assorted tchotchkes, saved for decades? Through a 585-page inventory?

Well, according to Lexington, Kentucky-based artist Louis Zoellar Bickett, all of the above. Bickett’s staggering personal archive, which he refers to as The Archive, documents his entire existence since 1972 through seemingly every object he ever touched. It’s a record of his life down to the most minute receipts.

With a selection of The Archive Louis Zoellar Bickett currently on view in the project space at Andrew Edlin Gallery, Bickett’s near-maniacal impulse to preserve raises crucial questions about the nature of archives, particularly for marginalized communities. Full of binders, knickknacks, multiple series of deceptively deadpan self-portrait photographs taken at Walmart, jars of matches from A La Lucie, a French restaurant where Bickett worked as a server for 35 years, leather-bound crosses, and countless other objects meticulously organized, Bickett’s is a thoroughly queer Southern archive if I’ve ever seen one, asserting an identity and experience that could easily be silenced.

The installation in Andrew Edlin recreates Bickett’s living room, with cabinets, bookshelves, a desk and other furniture mirroring Bickett’s home where his archive also resides. While viewers’ fingers might be posed over their phones, trying to find the number for Hoarders, Bickett’s expansive, nearly lifelong artistic project is more the New Museum’s The Keeper than a cause for alarm. His archive, housed in his own apartment, is a functional art installation, blurring the lines between his daily lived experience and his artistic practice. It’s an inhabitable conceptual artwork. Duchamp would be so jealous.

After just a cursory look around the gallery space, it becomes obvious that Bickett’s archive is almost shockingly democratic, as well as thorough. In one part of the installation, Bickett tags a small blue doggie cookie jar with the caption: “Becca Morrison McDaniel gave me this cookie jar filled with her famous lime cookies for my 65th birthday.” No item is too small, too insignificant or too unimportant for saving. His 585-page inventory, printed up by the gallery in a hefty phonebook size, confirms this “everything must stay” impulse, which includes entries like “222. Domestic Evidence: Purple Toothbrush and Travel Size Crest Toothpaste, September 24, 2003 Note: Used by LZB during his visit to NYC, September 11-16, 2003.”

His all-encompassing aesthetic is also visible in his artist book My Timeline, available at the gallery corresponding with the exhibition. The book narrates Bickett’s life from birth until 2016, when the book was published. In the same way that Bickett refuses to make a distinction between personal mementos and trash, his life experiences are similarly equalized. For example, on one page, Bickett lists, “July 7, 1985: Father dies at age 84” with “Summer 1986, my cat Pushkin urinates on my baby portrait.” Yeah, seems about the same.

Within this installation, in which the viewing experience feels like snooping through someone’s home, Bickett interrogates the representation of lived queer Southern experience, loss and the need, above all, for keeping. It wouldn’t be overkill to describe Bickett’s collecting impulse as a type of “archive fever.” In his nearly impenetrable study of archives, Archive Fever: A Freudian Impression, Jacques Derrida connects this urge to archive to the threat of finitude. He writes, “There would indeed be no archive desire without the radical finitude, without the possibility of a forgetfulness, which does not limit itself to repression. Above all, and this is the most serious, beyond or within this simple limit called finiteness or finitude, there is no archive fever without the threat of this death drive, this aggression and destructive drive” (19).

In other words, the threat of death and erasure drives an absolute need to archive, fearing the destructive repression of certain lives, experiences, histories and desires. This drive can be seen quite clearly in the queer community, which has a stake in preserving stories of same-sex desire, eroticism and queer lives since many of these experiences and histories have been denied. Archives–even unexpectedly personal ones like Bickett’s–take on an essential significance.

In her book An Archive of Feelings: Trauma, Sexuality and Lesbian Public Cultures, Ann Cvetkovich picks up on the necessity of archives for the queer community. She notes, in her introduction: “In the absence of institutionalized documentation or in opposition to official histories, memory becomes a valuable historical resource, and ephemeral and personal collections of objects stand alongside the documents of the dominant culture in order to offer alternative modes of knowledge” (8).

Perhaps unsurprisingly HIV/AIDS looms large in the exhibition. As Cvetkovich notes, archives have always been important to queers, but they became matters of life and death during the onset of the HIV/AIDS pandemic–a time when many artworks, belongings and archives of those that were dying from complications from AIDS were being tossed in the trash by family members ignorant of their meaning or importance. In response, many institutional and personal archives began as a direct response such as Visual AIDS, Fales Library’s Downtown Collection, etc. While Bickett’s archive began before, the influence of HIV/AIDS on The Archive is unmistakable, as seen in a jar filled with condoms emblazoned with the phrase “Daddy is HIV+” or graveyard dirt collected from friends’ graves who died from complications from AIDS.

But more than HIV/AIDS, the queer alternative modes of knowledge, as cited by Cvetkovich, become even more critical in Bickett’s case as a queer Southerner, an identity that often, although increasingly less so, goes willfully ignored even though as James T. Sears says, “Southern history is never simple and seldom straight.”

Even if that is so, it’s still occasionally hard to ferret out those queer Southern histories apart from the pages of Tennessee Williams, Truman Capote and other Southern writers. Tison Pugh, in his publication Precious Perversions: Humor, Homosexuality and the Southern Literary Canon, writes of the American South, “the dominant culture has historically prized a blanket construction of sexual and racial heteronormativity as one of its defining virtues–no matter the blinders necessary to endorse such a view.”

Beyond just blatant homophobia, queerness in the South must also grapple with the violence of omission. “An extensive silence,” observes Pugh, “in which many narratives simply do not acknowledge the likelihood of queer lives, queer loves, and other such precious perversions of southern sexual gentility. In some ways such silence is even more deadening: one can argue against biased depictions of gay life, but it is harder to resist the virulent miasma of nothingness.”

But, here is where Bickett’s archive comes in. Bickett, by archiving his life, directly, as Pugh writes, resists the virulent miasma of nothingness by filling this nothingness with the literal detritus of his entire life. Beyond just saying “I’m here and I’m queer,” Bickett buries viewers in an avalanche of proof of his existence and his experience. By keeping and recording everything, his life, desires and experiences cannot be ignored.

And Bickett’s lifelong record does not just emphasize his gay identity or the effect of HIV/AIDS on his life, but it also is unquestionably Southern. From a jar full of Spanish moss to his use of red wax to seal his various jars, reminiscent of an unopened bottle of Maker’s Mark whose distillery is located nearby in Kentucky, to his photographs taken in that beacon of rural America–Walmart–which he emblazons with a label over the mouth reading “queer,” references to the South and Kentucky specifically are everywhere in The Archive Louis Zoellar Bickett.

Even his liberal use of the phrase “Daddy” throughout the archive (“Daddy’s Nut Cracker,” “Daddy’s Button Collection (Standing Up For His Causes),” “Daddy’s Tie Collection (Daddy Dresses Up),” etc.) seems to fit right into the intersection of queer and Southern. On one hand, of course, daddy references gay male daddy culture. That should go without saying. But, on the other hand, the use of daddy also reminds me of the prevalence of “Big Daddy”’s in the South, the paternal figurehead of the Southern family, as evidenced by Big Daddy in Tennessee Williams’ Cat On A Hot Tin Roof.

[Aside, since I know you faithful Filthy Dreams readers will want to know, Bickett met our filth elder TW, writing in his My Timeline: “Summer 1982 At the bar in Downtown Lexington KY, My friend William Goodman Introduces me to Tennessee Williams. We have a pleasant conversation about literature.” Jealous.]

By this grounding in Southern and queer culture, Bickett not only counters the silence of Southern queer lives in the South. But, he also dismantles metronormativity–the presumption that the only place to be “out” is in the metropolitan centers like New York and San Francisco.

But The Archive Louis Zoellar Bickett is not your average library archive, which is not unusual for queers who must locate same-sex desires and queer experience through ephemeral means. As Ann Cvetkovich writes, “Forged around sexuality and intimacy, and hence forms of privacy and invisibility that are both chosen and enforced, gay and lesbian cultures often leave ephemeral and unusual traces” (8).

In her chapter “In The Archive Of Lesbian Feelings,” Cvetkovich further delves into these unusual traces. Cvetkovich writes, which could be an apt description of The Louis Zoellar Bickett Archive, “In insisting on the value of apparently marginal or ephemeral materials, the collectors of gay and lesbian archives propose that affects associated with nostalgia, personal memory, fantasy and trauma make a document significant. The archive of feelings is both material and immaterial, at once incorporating objects that might not ordinarily be considered archival and, at the same time, resisting documentation because sex and feelings are too personal or ephemeral to leave records. For this reason and others, the archive of feelings lives not just in museums, libraries and other institutions, but in more personal and intimate spaces…” (243-244).

Well, you can’t get more intimate than someone’s apartment. A personal record of a queer Southern life lived, The Archive Louis Zoellar Bickett is imbued with loss, love and the impulse to preserve what remains as proof for subsequent generations. As Derrida writes, “The archive has always been a pledge and like every pledge, a token of the future” (18).