“Finally, Don Quixote understood her problem: she was both a woman therefore she couldn’t feel love and a knight in search of Love. She had had to become a knight, for she could solve this problem only by becoming partially male. It was necessary for her to delve deeper into this matter. What was a woman? Was a woman different from a man? What was this ‘love,’ which only having dreamt about, she was now turning around her total life to find?” writes Kathy Acker in her maddening experimental novel Don Quixote. While she often donned various personas to act as her foils whether Don Quixote, Hester Prynne or the Black Tarantula, Acker attempted to find a language for female sexuality, desire and experience.

In many ways, artist (and writer, filmmaker and curator) Ellen Cantor’s career-long exploration of love mirrors Acker’s own (and yes, this is high praise). Whereas Acker found a language, as she writes in Blood and Guts in High School, “a language that means something to me,” Cantor discovered a corresponding visual representation of the fluidity and multiplicity of women’s sexuality.

Granted, this is no easy task. In her seminal feminist text This Sex Which Is Not One, which often gets written off as merely essentialist even though it remains useful in contemporary critique (academics…*eyeroll*), Luce Irigaray reveals, “Female sexuality has always been conceptualized on the basis of masculine parameters” (23). For Irigaray, similar to Acker and Cantor, women’s desire “would not be expected to speak the same language as a man’s” (25). And as Cantor shows in decades of her art, it doesn’t have to.

This may explain why this fall everything came up Cantor. We’re currently at the tail-end of the Cantor extravaganza in New York with only two exhibitions that remain open–Are You Ready For Love? at 80 Washington Square East Galleries and Lovely Girls Emotions at Participant Inc., which closes today. While this review will only focus on these two shows, in the spirit of comprehensivity, I’ll mention the others: 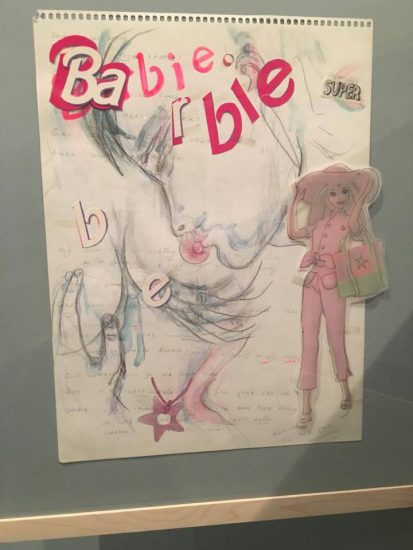 The most emblematic exhibition of Cantor’s wildly prolific creative output is probably 80 Washington Square East’s Are You Ready For Love?, which showcases a range of some of Cantor’s most highly regarded pieces. This includes the unsettling yet undeniably hilarious film Within Heaven and Hell, a mash-up of The Sound of Music and The Texas Chainsaw Massacre merged with her own narrative texts. How lovely!

This transgressive and transcendently personal use of appropriation can be seen throughout the exhibition, which begins with a room of Cantor’s large-scale drawings on canvas. With the faint lines of pencil juxtaposed with the monumental canvases, Cantor questions the masculinity of painting, allowing for a more feminine link to drawing. 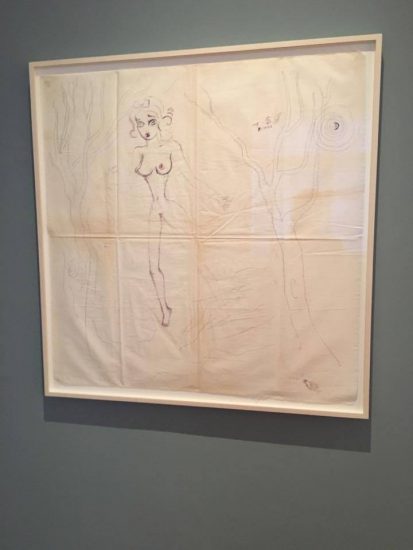 Like Acker, Cantor finds a subversive strength in appropriation and enacts a nuanced social critique by taking on these fairytale figures. Of course, naturally, there is a drive to dash their innocent, virginal appeal, as well as expose the minimal and simplistic roles that women have been given to play.

But, Cantor also has a palpable sensitivity for these characters. It’s not like Paul McCarthy’s White Snow, which violently pokes fun at these Disney-fied characters. Conversely, Cantor provides a real tender care to the most cliché female figures, even Barbie. In that, she shows how all women–whether cartoonish or not–have been essentially overdetermined in how we can exist, love and desire.

And she’s certainly not the first. It’s no mistake that Irigaray’s This Sex Which Is Not One begins with an allegory of Alice going through the looking-glass. As Irigaray writes, “What’s the difference between a friend and no friend? A virgin and a whore? Your wife and the woman you love? The one you desire and the one you make love with? One woman and another woman? The one who owns the house and the one who uses it for her pleasure, the one you meet there for pleasure? In which house and with which woman does–did–love happen? And when is it time for love, anyway? Time for work? How can the stakes in love and work be sorted out? Does “surveying” have anything to do with desire or not?” (10).

Using narrative, Cantor employs these pop cultural icons as tools to shatter patriarchal assumptions about female sexuality. Fiction and narrative loom large in Cantor’s work as seen quite obviously in the numerous framed notebooks expertly hunt on the walls of 80WSE. This allows viewers to physically page through them, satisfying a desperate urge that is typically foreclosed by notebooks under glass vitrines in galleries. By encouraging viewers to handle the works, the notebooks take on a physical sensuousness that mirrors the scenes of desire in their pages.

Within the notebooks, viewers will find narratives of love. For Cantor, love isn’t some cheesy rose-strewn romance, created by Hallmark in time for Valentine’s Day. It’s a mixture of pleasure, pain, shame, pride, terror, intense desire, alienation, longing, lust and just a little sadomasochism thrown in for good measure. She paradoxically depicts the relatable fraught tensions of love through a combination of reality and fantasy.

For example, one notebook entitled True Stories 2 features a tense tale between a man and a woman. On one page, the couple holds each other close while a caption reads “How many relationships do you have?” while on the next panel, the man flogs her, stating “she wants more.” With the title, a question remains about how personal these stories are. They are also unabashedly sexually fluid, depicting a whole host of relationships. Cantor’s refusal to label female desire is as radical as it is refreshing. 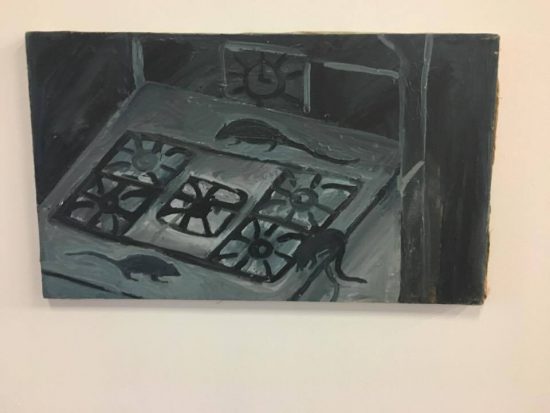 This freewheeling eroticism is predated by Participant Inc’s exhibition Lovely Girls Emotions, which looks at Cantor’s earlier works from the 1980s until the 1990s. Tracing the development of Cantor’s thinking, Lovely Girls Emotions relies on more heavily on traditional painting than her later drawing and video work. However, the works still strive to convey a wholly female version of sensuality.

Of course, not all Cantor’s paintings in Lovely Girls Emotions have to do with sexuality. One of my particular favorites is also perhaps the most random–a painting of rats skittering in the shadow over a stove. Maybe it’s my East Village address or romanticism of squalor, but this early painting at least deserves a shout out.

Unlike her use of pop cultural caricatures in Are You Ready For Love? , the paintings in Lovely Girls Emotions look back to antiquity to find a visual language for female desire. In This Sex Which Is Not One, Irigaray notes that women’s desire has “doubtless been submerged by the logic that has dominated the West since the time of the Greeks” (25). With this in mind, it seems like Cantor’s ancient, almost mythic aesthetic, as seen in the swirl of nude figures in paintings like American Dream, derives from a drive to look even farther back before phallogocentric representation and language. (Yes I used that word).

This is further emphasized in the collection of totems at the back of the gallery, which looks almost like a shrine to the female body and its eroticism. What is particularly compelling about these figures, though, is that while their influence might be antiquity, their materials are thoroughly 20th century. Cantor uses pom-poms, colored feathers, ribbons, crushed Diet Pepsi cans and glitter all over these wooden women figures. Standing tall, these works look like contemporary goddesses.

In many ways, Lovely Girls Emotions reminds me of the conclusion of Acker’s Blood and Guts in High School, which ends with a transcendent folktale about the collective freedom of women’s sensuality and appropriated language. As Acker writes, “We are dreaming of sex of thieves, murderers, firebrands, of huge thighs opening to us like this night” (163).