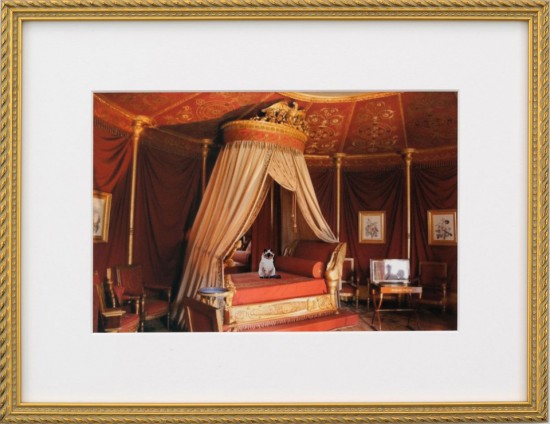 Karen Kilimnik, thank you, this is very nice, I like it, it goes with my coloring, 2016, Collage on paper (all images courtesy the artist and 303 Gallery, New York)

What is so bad about kitsch? Well, other than bad taste of course. Kitsch–the label for all things gaudy, glittering and garish made for those who were born to be cheap–seems to be one descriptor that not even those devoted denizens of camp will proudly and loudly declare. But, who doesn’t love a touch of bargain bin trash?

These fraught issues surrounding kitsch’s poor judgment and faulty aesthetics, as well as its tendency to infect everything around it with its appalling taste, lies at the heart of Karen Kilimnik’s current solo exhibition at 303 Gallery. A lurid display that would make even Mike Kelley jealous, Kilimnik’s exhibition appears as an unabashed celebration of tacky Midwestern scrapbooking practices layered over previously respectable art historical tropes. 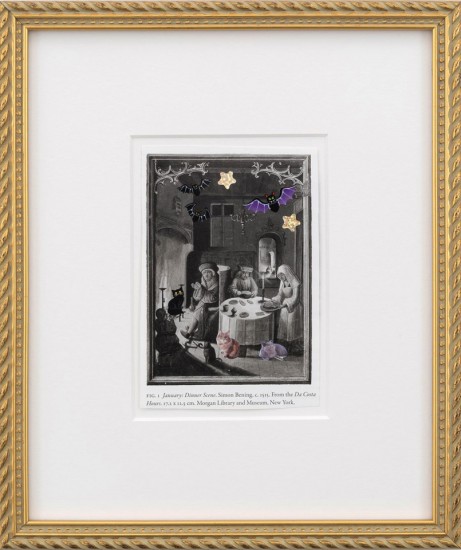 Reminiscent of Kelley’s Reconstructed History series, Kilimnik’s new work humorously mocks and slyly subverts these overly serious museum classics from hunting pastorals to antique interiors. However, Kilimnik’s art in 303 Gallery possesses a distinctly feminine touch with its glitzy perfume bottles and copious cats. If Kelley is the juvenile delinquent scrawling dicks and tits on historical figures, Kilimnik is the manic cat lady teacher pathologically placing a few too many stickers on her students’ pop quizzes.

No stranger to kitsch throughout her artistic career as seen in her well-known installation The Hellfire Club Episode of the Avengers, which gathered objects and images related to the 1960s mod television show, Kilimnik’s exhibition features several dynamic and demented disciplines of work including her sticker-heavy collages. Using reproductions of tapestries, Medieval prints, academic texts and opulent Old European interiors as the basis of her collages, Kilimnik then fills the original scenes with dollar store stickers including photorealistic cats, flashy fish, shimmering bats and a few gold stars. 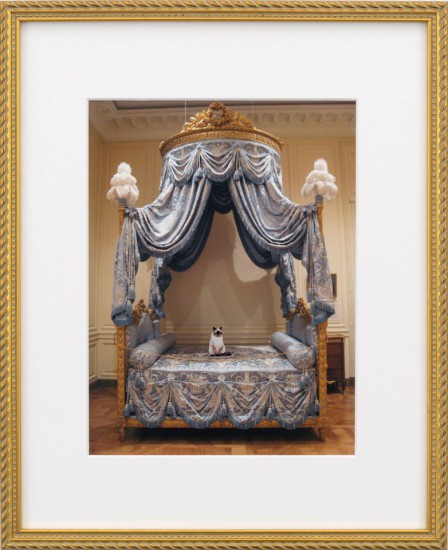 Perhaps my favorite collages are the interiors featuring absurd scenes of singular cats on enormously luxurious beds. Adding some camp to her kitsch, Kilimnik titles these works with hilarious snooty and privileged phrases as if the cats were speaking to their serving staff such as thank you, I’m rested now. I’ll have the lobster today, thank you. Even the thin gold frames surrounding these collages adds an over-the-top richness to her simplistic but clever Hallmark-appropriated process. 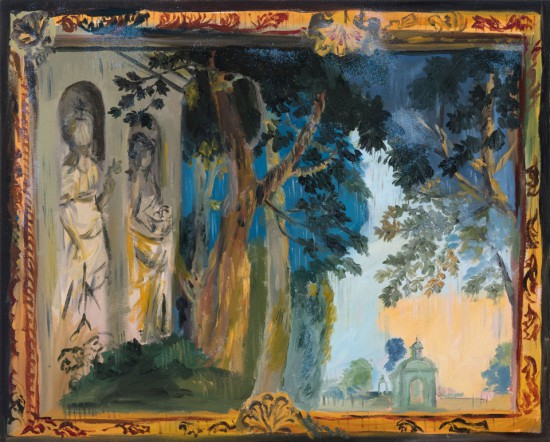 Karen Kilimnik, the goddesses Artemis & Ceres return to their niches to sleep after a hard day’s work, 2016, Water soluble oil color and glitter on canvas

In addition to her collages, Kilimnik also presents a series of pastel-colored, gestural paintings, covered in a smattering of glitter–a twist on the centuries-long traditions of painted tapestry reproductions, battle and hunting scenes and still lifes. Even the installation of Kilimnik’s exhibition could be considered kitsch in itself, namely the back gallery. Shrouded by an extravagantly heavy velvet curtain, the gallery features a glowing chandelier, poorly lighting the art but accentuating its glitter. In Kilimnik’s hands, aesthetics–even bad ones–overtake practical priorities. 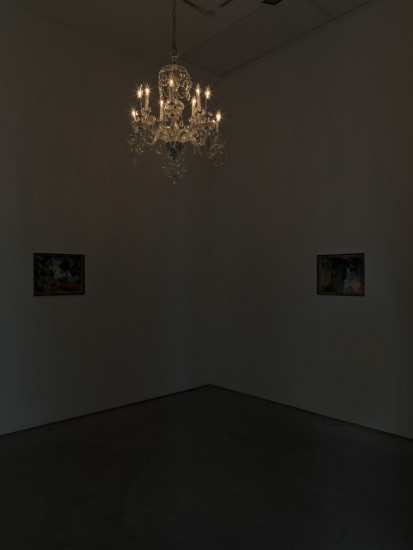 However, with this clear, concise and strong statement of kitsch pride, why did 303 Gallery go to such extreme and thesaurus-clinging lengths to avoid mentioning that dreaded word in their press release? With an adherence to art-speak jargon that appears almost kitsch itself, 303’s press release for Kilimnik’s exhibition describes her work as almost everything but kitsch. (Note: Apologies to whatever underpaid gallery assistant wrote this press release. I’ve been there. It gets better.)

“Building these layers of reference into spellbinding narratives, Kilimnik has created her own universe of referents, an extraordinary journey through a composed world that is entirely sui generis”

Well, it’s hard to be “sui generis” if you can buy those stickers at the Dollar Tree.

“Kilimnik’s ability to tease the sublime into unexpectedly mellifluous shapes remains the most joyfully contagious tenant of her practice.”

Kitsch…you mean, kitsch. The only obscure indication that may hint at Kilimnik’s harnessing of kitsch is the statement that Kilimnik’s work is “simultaneously fantastical and plebeian.” Plebeian is a descriptor more apt for Donald Trump supporters than Kilimnik’s aesthetic, but I assume it’s an attempt to refer to kitsch without using the legitimate word.

I could go on, however I don’t want to overly abuse the poor press release writer since they are only following in the footsteps of many others who have abandoned kitsch as a potential site for subversive creation.

In her seminal Epistemology of the Closet, queer theory icon Eve Kosofsky Sedgwick demeans kitsch by posing it against the, as she sees, more productive camp. In David M. Halperin’s How To Be Gay, he revisits Sedgwick’s notions of camp versus kitsch in his own analysis of camp in gay culture. He describes, “The application of the ‘kitsch’ designation, Sedgwick argues, entails a superior, knowing dismissal of someone else’s love of a cultural artifact, a judgment that the item is unworthy of love and that the person who loves it is the ‘unresistant dupe’ of the ‘cynical manipulation’ that produced it. When I label the object ‘kitsch,’ I treat the application of it as a fault, as a lapse of taste, as evidence of a debased sentimentality that I myself have transcended and do not share” (188).

He continues, “Kitsch,’ in short, is a word one never applies to objects of one’s own liking, but employs only to disqualify the sentimental, uncritical, bad object choices made by other people” (189).

Looking at Kilimnik’s artwork, the weakness in both Sedgwick and Halperin’s assertions–though correct in some respects–can be observed. Sure, someone can denounce something as kitsch to render it meaningless and useless garbage like the viewer who scrawled, “this is terrible” in the 303 Gallery guestbook at Kilimnik’s exhibition. But what Sedgwick and Halperin’s conceptions of kitsch lack is an analysis of a purposeful acceptance and celebration of kitsch. What happens when an artist–a tastemaker in many respects–such as Kilimnik fearlessly embraces kitsch as an essential part of their own visual language?

Karen Kilimnik, the historical presence of the cat in the tapestry market, netherlandish later half 15th century, 2015, Collage on paper

Kilimnik’s artwork, as seen in 303 Gallery, does not seem to contain an inherent, winking critique of these cheap materials. Instead, kitsch is employed to justly destabilize the strict divisions between good and poor taste.

In The New German Cinema: Music, History and the Matter of Style, Caryl Flinn discusses a similar division between camp and kitsch to Sedgwick and Halperin and yet, her description of kitsch contains an important point. As she states, “If a central concern of camp is the construction of psychic and socio-sexual identities (as in its send-ups of white heterosexuality), kitsch, by contrast, functions more as a consequence of economic and social structures, without which the categories of taste and tastelessness would be impossible in the first place. Camp may be ‘failed seriousness’ to invoke Sontag, but kitsch is failed judgment. Where camp is childish, kitsch is an irresponsible adult. It should ‘know better’ and so is tied to a sense of inappropriateness that exceeds taste or decorum, trespassing moral and ethical terrain…” (238).

Karen Kilimnik, the adoration of the cats, 2016, Collage on paper

Defining kitsch as “falling outside the parameters of quality, awareness and productivity,” Flinn lands on the integral dangerousness of kitsch (239). Unproductive, kitsch throws all boundaries between “taste and tastelessness” into question–a consequence of kitsch harnessed by Kilimnik for her own purposes in 303 Gallery.

Karen Kilimnik, hunt for the dinner feast – in the forest with garlands & bow decor
2016, Water soluble oil color and glitter on canvas

In Kilimnik’s exhibition, her inappropriate placement of chintzy materials such as glitter or stickers not only undermines the high art exceptionalism of white-walled gallery spaces, but it also weakens the lofty position of her appropriated historical and academic materials. For example in Kilimnik’s painting hunt for the dinner feast–in the forest with garlands & bow décor, Kilimnik tosses glitter into a highly masculine traditional art historical trope–the hunting scene. By glittering up this art standard, Kilimnik somehow transforms the entire genre of hunting paintings into kitsch. I mean, what is more kitsch than those overly serious largely brown toned hunting scenes full of hounds, horses and British high camp?

Kitsch is infectious, transforming how we view formerly solemn and tasteful artistic conventions. In The New German Cinema, Flinn writes, “Indeed, kitsch is rarely valued in anyone’s scheme,” which is disappointing given the potential loss of radical configurations of classical aesthetics (239). If kitsch were properly valued as shown by Kilimnik, image the transformative, transcendent and yes, trashy possibilities.