Party Out Of Bounds 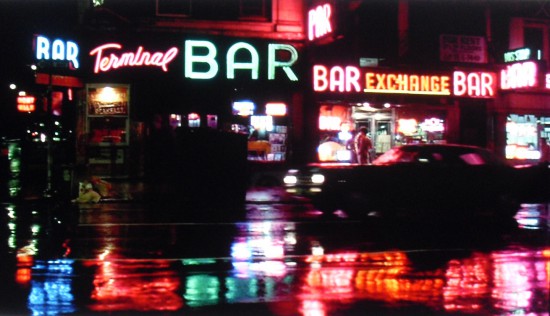 The Terminal Bar as seen in Taxi Driver

“They called it the Terminal Bar but they had no idea that like twenty years later the place’d be filling up with terminal cases.”

While our favorite down-and-out drunken troubadour Tom Waits was not actually referring to New York’s bygone glorious and dangerous dive–the Terminal Bar, he might as well have been. An infamously sleazy and sometimes, scary staple in the neon, sex-driven, bum-ridden haze of old Times Square, the Terminal Bar was, at the time, referred to as the “roughest bar in New York.”

Opened in 1958, the Terminal Bar was located across from the perpetually dirty Port Authority station. Originally catering to a tough and often brawling Irish-American crowd, the bar began to attract mainly gay black patrons.

The Terminal Bar was owned by Murray Goldman, buying the lease in 1956 with the encouragement of his brother-in-law Bernie and cousin Arnie who ran the Twist-originating Peppermint Lounge. 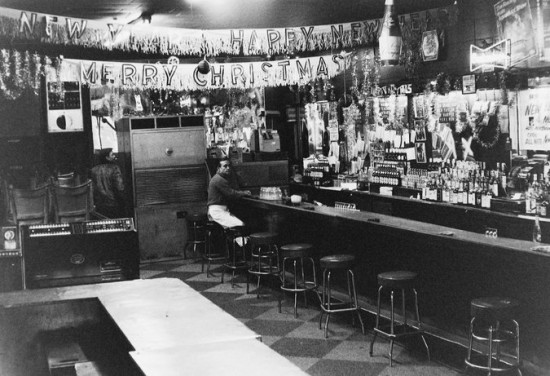 Sheldon Nadelman, Inside the Terminal Bar, 1976 (via nytimes.com)

I know what you’re wondering, dearest Filthy Dreams fiend, what was the bar actually like? Well, let the New York Times‘ Peter Genovese illuminate this institution of sleaze in his 1982 article “Terminal Bar, Eighth Avenue: The End Is Near”:

“The bar is situated smack in the middle of one of the dirtiest, toughest, wildest neighborhoods anywhere: 8th Avenue, just off 42nd Street. Anything can happen here, and does.”

Are your nerve-endings tingling? I know mine are. Genovese continues:

“The bar is not much to look at, inside or out. The exterior is gray and grimy, and the sidewalk smells of urine. The interior is drafty, but there’s plenty of room, and nearly 200 bottles of liquor from which to make drinks.”

Sounds like our kind of spot. Let’s hear more details from one of the regulars:

“‘Through these doors,’ says Paul, one of the regulars, ‘pass some of the most miserable people on earth.’ He smiles. Paul has been coming down to the Terminal from Harlem for a dozen years. ‘I come here in the morning,’ he says. ‘My grandchildren drive me crazy.” At 10 a.m., he’s drinking rum and coke.'”

Many of the regulars such as Paul were documented through the lens of bartender (and the owner’s son-in-law) Sheldon “Shelly” Nadelman who took stunning black-and-white photographs of these Terminal Bar regulars or, as Tom Waits would say, “terminal cases.” Snapping over 2,500 photographs from 1973 to 1981, Nadelman captured the vibrancy, vulnerability, tragedy and bold personalities of the bar’s now likely long-gone patrons.

Though the bar closed in 1982 over increased rent, the Terminal Bar and Nadelman’s photographs have recently been revitalized through both a book–Terminal Bar: A Photographic Record of New York’s Most Notorious Watering Hole–and a documentary, which is thankfully now online.

Made by Shelly’s son Stefan, the documentary Terminal Bar mixes Nadelman’s photographs with narration by Nadelman himself who incredibly remembers patron’s names, personalities, drink orders and whether he had to toss them out of the bar. Winning the Sundance Jury Prize for Short Film in 2003, viewers get a sense of what it would be like to visit this forgotten institution of sleaze.