Party Out Of Bounds

Yaaawn…OH! Hello again! I’m so sorry, dear readers, I’m just so tired today. Oh I know I look rough, you didn’t have to point that out. I see your dark circles too, Mary. I spent the evening at the opening of Visual AIDS’s exhibition Ephemera As Evidence, which naturally you’ll see reviewed here in the not too distant future. But I left so full of ideas that I just couldn’t sleep. Or perhaps it was the dull rage I felt after daring to venture to the most pretentious ice cream parlor in the city. I know, who am I kidding? Stick to the bars, queens, stick to what you know best.

Anyway, you know what would perk me up? A K-hole! And just on time, we’re going to roll right into another one for this week’s Party Out Of Bounds.  Why, yes, we’re returning to the ever so frivolous era of the Club Kids so enter our Project X Magazine Reading Room!

Founded in the late 1980s by club kid Julie Jewels and notorious party monster Michael Alig, Project X Magazine began as a raunchy and rebellious Xeroxed zine, presenting off-the-wall, off-beat and off-kilter coverage of all aspects of the club scene from fashion to music to Alig’s own gossip column “Club Rub.” Project X also featured fantastic ads from the clubs such as the Tunnel, Danceteria and of course, Limelight where many of the writers, editors and subjects worked.

From RuPaul to James St. James to Amanda Lepore as a seductive and sensual centerfold, Project X Magazine celebrated the self-made, self-fashioned and thoroughly queer glamour of the club celebrities of the late 1980s and 1990s. Later on in the magazine’s run, Project X even expanded to cities outside of New York like Tokyo and Los Angeles (even my favorite LA-based drag terrorist Vaginal Davis makes an appearance). 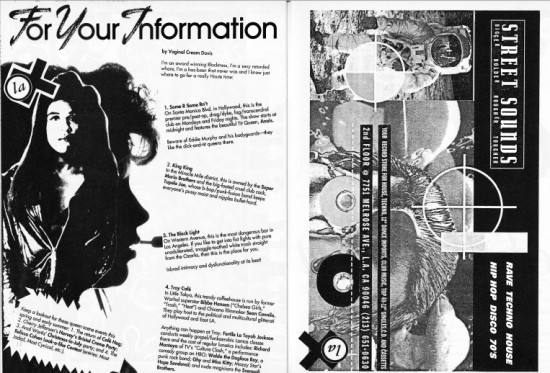 Perhaps my favorite aspect of the magazine is Julie Jewels’ own editor’s letter, which seems to exist solely to decadently assert their own frivolity. Oh do tell, Julie! We want to be frivolous too!

“Once again vanity rears its ugly head in the shape of Project X,#18. But is vanity really ugly or just alternate beauty? …Now it stands as a testament to  ridiculous ideals. These ideals are similar to the frivolous ones predominating in the following pages, making Project X a definite symbol of vanity for the 90s. An often disparaged, hand-held looking glass that will become an object of reverence for the future. Therefore, vanity is sanity and its never ugly.”

Project X issue #16 with the King and Queen of Clubs (James St. James and Codie Field)

And just for good measure and some more nihilistic inspiration, let’s read another of Jewels’ inspired letters from issue #21:

“Our planet has happily floated in the orbital system for over 4 billion years and has somehow always managed to maintain a perfect balance in all of its ecosystems. Surely there were a few notable famines, earthquakes and wars, but it’s safe to say that the earth was always healthy. Of course, we happen to live in a time were the catastrophes of all ages now occur over a single weekend. How exhausting!

With all this in mind, our magazine has been criticized for being frivolous, pretentious, small-minded and ignorant of any issues of importance (like saving the planet) and it’s the truth—we take it as a compliment. But its all for a good reason. We’re not really ignorant. Reality has just become so terrible and depressing that we just choose to have some fun and add just a little bit of color to our globally grey scheme.

So if you don’t agree with our thrill-seeking ideology, then give our magaine to someone who will. And you should lighten up a bit!”

Even though Jewels’ insists on Project X’s ignorance, that doesn’t necessarily mean they always succeed in avoiding politics and the harsh realities of the late 80s and 90s such as the HIV/AIDS epidemic. One particular article from Chip Duckett’s column “Fags and Dykes in the Gay 90s” emphasizes the value of participating in AIDS activism whether through keeping yourself informed of the ongoing conversations and issues or demonstrating with ACT-UP.

As Duckett notes in issue #13:

“Next, try a demonstration. They’re kind of fun in a weird way. (club kids, take note: you can wear your outfits if you want to). You’ll know more people there than you think, even if your work right now consists of drink tickets and guest lists. At recent ACT-UP demos, I’ve spotted Michael Musto (at almost every one), Kenny Kenny, James St. James, Michael Alig, Keoki, Tina Paul…the list goes on and on. And its important to note that these people are coming because they know its important—NOT to get a mention in Project X.

Don’t think it doesn’t effect you. AIDS has ripped a lot of people out of the club scene, from Klaus Nomi to Steven Cohn to Cookie Mueller. And a lot of people are sick. If you don’t know where to start, stop me in any club…I’m at all of them…and just ask me.

However, the real strength and my personal fascination with the magazine lies in how the Club Kids through Project X constructed their own celebrity status. If the big magazines weren’t writing about them yet, they created a magazine that would. And, naturally, others followed suit. Talk about queer world-making!

As all things must, Project X Magazine eventually became more polished and filled with advertisements. Focusing more on music and less on the club scene, the later issues of Project X, at least for me, don’t have that same renegade D-I-Y spark as the earlier issues. The last issue of Project X was published in January 1996.

So grab your binkies, succumb to debauchery and get ready to fall into the K-hole of Project X Magazine’s online archive here.