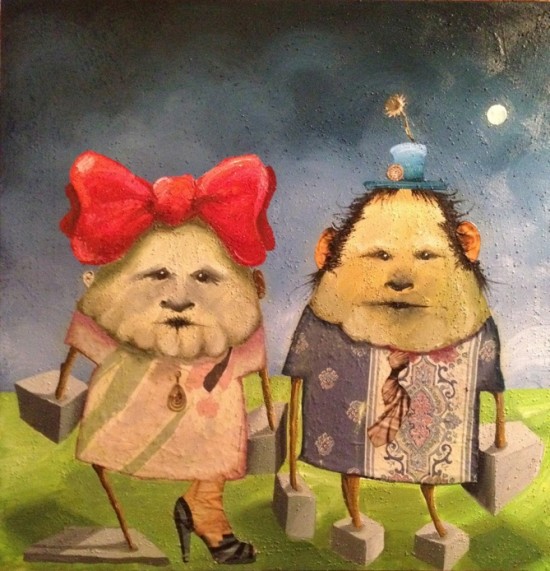 Straight from their heroin-laced Berlin days, Nick Cave & The Bad Seeds’ song “The Carny” has always haunted me, spinning a Beckettian tale of a missing carny and his doomed horse, Sorrow, to an off-kilter and off-putting Weimar-esque melody. Feverish, deranged, disturbing, strangely hilarious and completely ridiculous, “The Carny” almost always pops into my mind when viewing the hallucinatory paintings of artist Mark DeMaio, as seen in his current career-spanning exhibition Priests, Stilts, Clowns and Freaks at Sacred Gallery NYC.

With a title like Priests, Stilts, Clowns and Freaks, it is certainly not difficult to guess what types of subjects DeMaio chooses to portray in the exhibition, which is on view until April 30, revealing DeMaio’s longtime fascination and reinterpretation of these rich tropes.

Constructing an imaginative descent into a chaotic, creative world populated by religion, carnivals and discarded dolls, DeMaio’s show features a wide range of his vivid and surreal paintings including his newest and exciting works, which reduce the human body to simply sticks and cement blocks while still maintaining a strong sense of emotion and just the right amount of the uncanny.

A friend of Filthy Dreams who shares our demented and delusional sense of vaudeville, DeMaio is undeniably a showman (His last exhibition I Walk The Line featured stilt-walkers greeting visitors to the opening; hence the stilts in Priests, Stilts, Clowns and Freaks). This sense of burlesque showmanship transfers seamlessly to his vibrant paintings, which present a cavalcade of wonderfully bizarre carnival figures.

Walking through DeMaio’s exhibition, it would be easy to mistake the exhibition for a group show due to the variety of DeMaio’s subjects and painterly techniques. Despite DeMaio’s various and intricately rendered artistic styles, his continued focus on the darker side of surrealism, a psychedelic world where horror and the grotesque meet the hilarious, exists as a haunting thread throughout the exhibition. 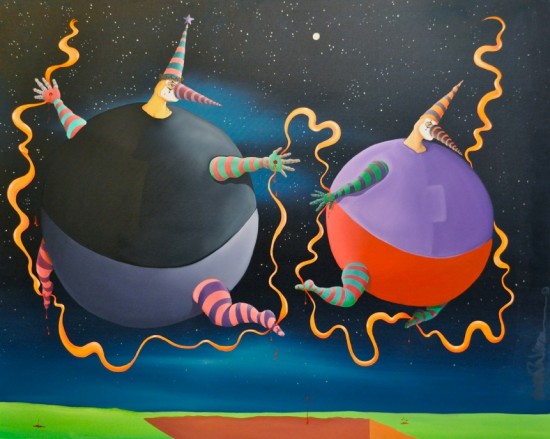 Mark DeMaio, A Rare Public Appearance By The Martyrs Of Port Lligat 48”x 60”, oil on canvas

“Dog-boy, Atlas, Man-Drake, the geeks, the hired hands
There was not one among them that did not cast an eye behind
In the hope that the carny would return to his own kind”

From castaway dolls entitled “Recession Dolls” that appear as if they came straight from the Island of Misfit Toys to circular balloon-like clowns and an enormous and lyrical painting “Funeral March for a Goblin,” DeMaio’s paintings mine the depths of the imagination through bright colors, hallucinatory imagery and a healthy dose of the absurd. 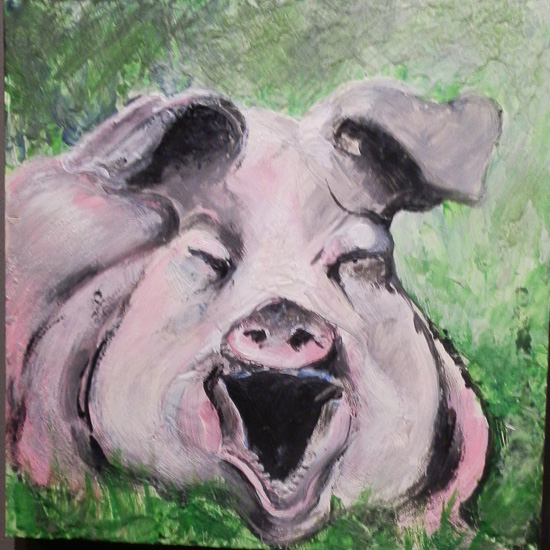 Even seemingly straight-forward paintings such as “Enviropig” contain a subversive and humorous terror. Squealing directly at the viewer, “Enviropig” seems, at least to me, like a perfect painting for a guest room…just enough to encourage your guests not to stay past their welcome.

While DeMaio’s artistic world may be a dark place, it still contains a deep sense of wit, camp and the ridiculous, celebrating these grotesque figures and finding a space of liberation within this unsettling visual landscape. And yes, as you may have already guessed dear reader (and if you’ll believe it, I think you are growing dearer to me still), my prior evocation of the ridiculous in DeMaio’s work is meant to signal a descent into a discussion of the Ridiculous Theatrical Company’s Charles Ludlam and his views of the ridiculous.

In Ridiculous Theatre: Scourge of Human Folly, Charles Ludlam explains his use of the ridiculous. As Ludlam states, “The outward appearance is Ridiculous but the intention is serious. Because we can laugh at ourselves we encourage this salubrious tendency in others. The clown can take risks because he alone can afford to make a fool of himself. The special contribution of the Ridiculous is to expand everyone’s sense of what is possible” (115).

Understanding this quote in relation to DeMaio’s art, it is certainly no mistake that DeMaio’s paintings are often populated by clowns. 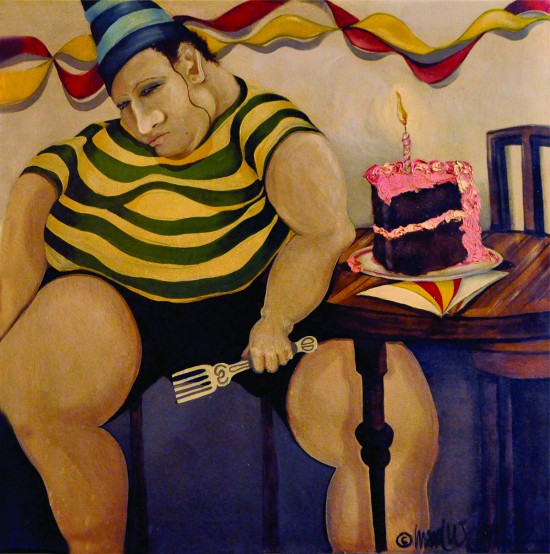 Expanding the viewer’s sense of what is possible, DeMaio’s paintings employ this same type of transgressive sense of humor and ridiculousness to grasp an undeniable truth about lived experiences, particularly in his distorted paintings of lone figures such as the eerie “Poor Eugene,” depicting a solitary man in a birthday hat with a nauseating Pepto-Bismol pink birthday cake, and “Happy New Year,” another hat-wearing man slumped near a deceptively cheery sign ringing in the New Year. They say one is the loneliest number and boy, they weren’t kidding.

A representation of desperation, loneliness, the downtrodden and a downward spiral of decadent decay, both “Poor Eugene” and “Happy New Year” would be downright depressing without DeMaio’s deft conjuring of the ridiculous. However, in a similar use of the ridiculous to Charles Ludlam, the viewer cannot help but laugh at (or perhaps with) the grotesque figures in “Poor Eugene” and “Happy New Year.” In that laughter, the viewer also sees a distorted representation of themselves within these characters–a serious depiction within a strange, surreal creation.

In his role model-worthy “Manifesto: Ridiculous Theatre, Scourge of Human Folly,” Ludlam concludes his manifesto, asserting “This is farce not Sunday school. Illustrate hedonistic calculus. Test out a dangerous idea, a theme that threatens to destroy one’s whole value system. Treat the material in a madly farcical manner without losing the seriousness of the theme. Show how paradoxes arrest the mind. Scare yourself a bit along the way” (158).

Looking at DeMaio’s paintings, his art evokes this same forceful call to scare yourself, treat the world as a grand vaudeville carnival, push the imagination as far as it can go and absolutely, embrace ridiculousness.