Ann Weathersby, She would not say of herself, I am this, I am that, 2019, found book, tape, fused and kiln formed glass, wooden shelf (Courtesy of the artist and Fortnight Institute, New York)

I am always living between two realities. There is the reality of presence, of now and of exteriority. And then, there is the reality of distance, of timelessness and of interiority. These two realities–the reality of me here now typing on my computer and the reality inside my fantasy space of memory and dreams–feel no more or less real than the other. That’s the beauty of writing and art making. It’s the closest we get to ontologically connecting lived reality to interiority. This is the complication of consciousness. Any experience I have, any decision I make, every sexual experience I enjoy is weighted by the expansiveness of my conscious, subconscious and unconscious mind. This is, of course, true of objects: even the seemingly most neutral, blank surroundings become imbued with the three decades of memories, fears, desires and fantasies I bring to it.

This notion yields a difficult problem that has been referred to as “the omnipresence of memory” by Richard Terdiman, Fredric Jameson’s predecessor as the Professor of Literature and of the History of Consciousness at UC Santa Cruz. Memory is everywhere, in everything. And while objects, like photographs, souvenirs or antiques, can “embody memory,” it is of particular uncanny interest to imagine, visualizing the personal memories (or desires, fantasies, thoughts, etc.) that we can project onto objects that are, let’s say, obtuse in terms of cultural memory.

This is what I find so evocative in the sculptural collages of artist Ann Weathersby. In the artist’s exhibition at Fortnight Institute, There is a Code of Behavior She Knew, Weathersby applies found photographs–typically vintage erotic pictures of beautiful women–and her own bizarre and delirious texts to glass, polygonal sculptural objects as blank in emotion as Patrick Bateman’s icy glare (“I am simply not there”). At its root, the photograph is an effort to solidify a memory into a document. But a century or so into its art historicizing, we know it’s more than that. Photographs enliven our interiorities. They seep into our fantasy spaces and, yes, our memories. If taking a photograph is “to appropriate the thing being photographed,” as Sontag put it, then to look at, absorb and obsess about photographs is to appropriate an appropriation into the very recesses of the subconscious mind. Images, texts, films and the art we absorb becomes metadata in the circuitries of our consciousnesses. The images that obsess us become part of our psychologies and engagements with the exterior world trigger them. Simply stated, images shape our thought processes.

Weathersby’s work aestheticizes the ways in which we astrally project the images that we’ve embedded into the recesses of our minds onto the inanimate structures that populate exterior experience. A trained photographer and a photography professor at SVA, Weathersby exhibits the lust for and deep obsession with captured still images that is characteristic of photographers perhaps more so than other artists and humans writ large. Photographer Duane Michals once said that it’s difficult for him to see photographs “objectively”: “talking about them is like talking about myself.” This personalized engagement with photography manifests in the way that Weathersby applies images to her sculptures. Though they are not photographs that she has personally created, her evident fascination with the found images she uses and the visual presentation of them collaged onto the objects comes across as evidence of her psychological associations whilst engaging with the exterior world. The pictures on these sculptures–rife with libidinal suggestion–are the ghosts of Weathersby’s aesthetic fascinations. They are a testament to how our inner desires manifest as spectral presences as we engage with physical reality. Whenever we look at an object, our mind’s eye projects an image onto that object. 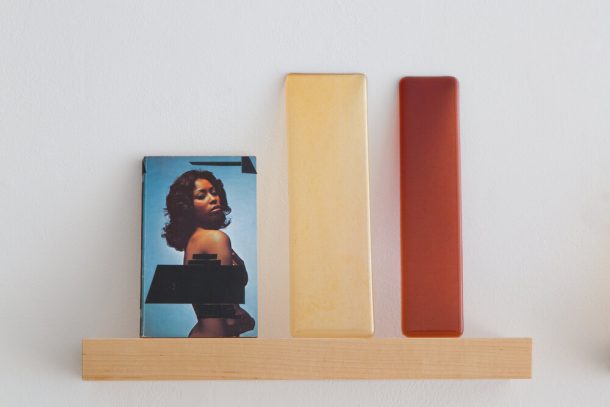 This visualization of inner psychology onto exterior objects is the pure beauty at the heart of Weathersby’s work. 20th Century psychoanalyst Melanie Klein developed the term “projective identification” to describe the process in which within a close relationship, parts of the self in unconscious fantasy may be projected onto the other; the most common example being a patient who can’t feel hope projecting hope onto the therapist. This is useful here in so much that it reinforces how powerful the mind’s unconscious projection can be. One can literally erase another’s identity by falsely projecting their worst self onto that other person. As humans, we walk through Earth with a rich expanse of interiority. Everything we do in our waking lives is characterized by a deep well of inner life happening simultaneously. Weathersby’s work is some of the first art I’ve come across to deal with this universality so clearly. It’s thrillingly uncomfortable, like that feeling you have during insomnia when the Benadryl isn’t knocking you out and the rapidity of your thoughts begin to center around your own mortality. Usually such thoughts are constant, but go more or less unnoticed. However, when such thoughts peak out towards the front of one’s cognition, dread and alienation transpire.

In the installation of the works at the exhibition, ethereal associations are made between disparate objects. In Red is so visible, four kiln-formed glass rectangular objects of varying shades of red are placed side by side. To the farthest left, a random book is adorned with one of the aforementioned photographs that has been altered with a red false color. The image is of a woman naked and hogtied in the Japanese kinbaku style of bondage. This assemblage allows the artist to commit a kind of projective identification onto her own viewers. The glass sculptures become objects of projection for us, the viewers, but by cross-associating them with the book and found image, Weathersby cancels out our personal projections and replaces them with her own: her fascinations, her desires, her fetishes.

While the images in the show are appropriated, there are also numerous abstract and unsettling texts written by Weathersby herself used in some of the objects. In pieces like You’re never going to be great, the artist opens a hinged wooden box with two photographs–one in black and white and one in color that both depict women vaguely dressed in 1970s fashion–on one side and a typed text on the other. The text opens: “We’re always barefoot and crush caterpillars by mistake…” It’s a striking image, one that could allude to our accidental wreaking of havoc upon all those in our lives. I could also be “projecting.” Nevertheless, Weathersby’s construction visualizes the psyche as a tangled web of language and image.

In the press release for the show, the artist and writer Audrey Wollen describes Weathersby’s work as a palimpsest. This description works literally of course, in that many of the pieces feature books that have had their texts replaced by the ones written by Weathersby. But, at the risk of sounding like a clichéd, critical theory brain-numbed, pseudo-intellectual bore (“if the shoe fits”), the joy in Weathersby’s art is found in its revelation of how all the objects found in our exterior environments serve as palimpsests for our interiorities. Something as innocuous as a flat piece of glass becomes a movie reel of our fears and fantasies as we look into it. If–as stated so by Freud–the madman is really the dreamer awake, then our environments are the projections of our madness in our minds’ eyes.

Adam Lehrer is an artist, photographer and writer. Lehrer’s work consists of manipulated photography, collages made of mostly Internet sourced appropriated images, and video loops. He has had solo shows at Spring Break Art Show, Governor’s Island Art Fair, and has been featured in group shows. Lehrer is also a culture writer, and his art, film and music criticism has been featured in Autre Magazine, The Quietus, Forbes, VICE, Bedford & Bowery, Bullett Media, i-D, SSENSE, and more.