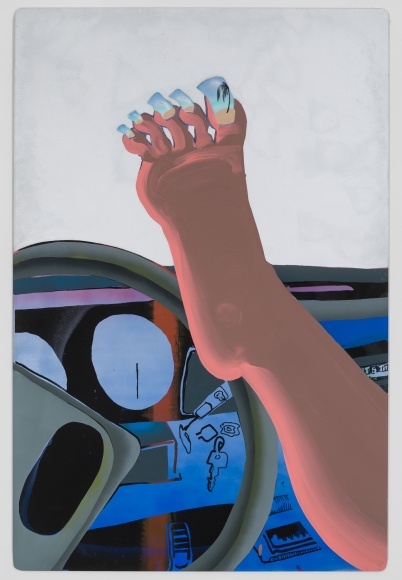 Alive With Pleasure!, curated by Irena Jurek at Asya Geisberg Gallery, hits like the Chelsea gallery equivalent of a summer rom-com or action flick. It’s highly entertaining, with just the right amount of irreverence, and visually seductive, while seeming to offer little fodder for viewer response beyond platitudes like, “That was cool! I liked it.” But these days, there is something suspicious about the idea of creating an art show that is meant solely to give pleasure. Our current cultural climate of fear, distrust, and questioning gives pause to the wary gallery visitor when confronted with an exuberant display of pop culture-inspired imagery united under the banner of a tobacco industry tagline.

The Newport “Alive With Pleasure!” ad campaign featured heterosexual couples frolicking and cavorting in subliminally suggestive scenarios as they smoked delicious menthol cigarettes. It wouldn’t make the FDA’s cut these days. Newport was lying to us. Cigarettes kill, so the tagline “Alive With Pleasure!” now reads as darkly ironic, or even offensive, depending on the audience. The truth is “taking one’s pleasure” is no longer the simple pursuit that it appears to have been in the 1970s and ‘80s, when these ads ran. And that is how we end up with a show about “pleasure,” masquerading as a show that is intended to be a pleasure. 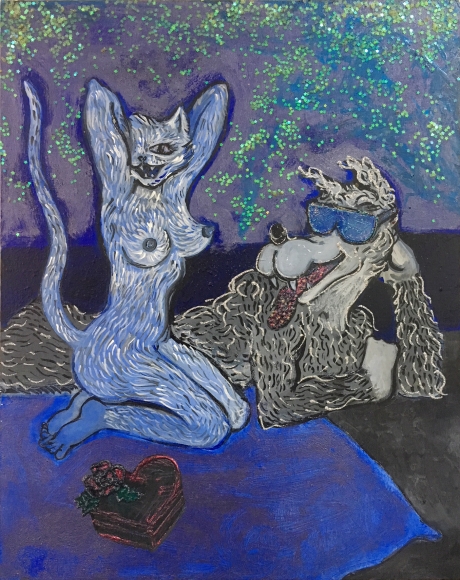 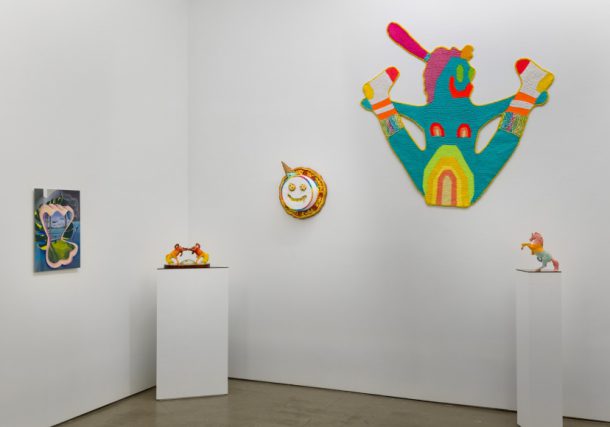 Caroline Wells Chandler’s crochet wall hangings have the color and feel of baby blankets, and hit a similar note between nostalgia and transgression. The figures she designs are playful, but also hint at the darker side of myths and fairy tales about transformation, as if suggesting that an overeager submission to the pleasure drive led to these novel embodiments as outsize genitalia. Elizabeth Ferry’s horse figurines are corrupted versions of familiar vehicles for childhood fantasy. Their flocked and glittery appeal give way to the grotesque via her addition of lifelike erect penises and pendulous breasts. In these and other explorations of the spectrum from innocence to experience, which juxtapose childhood delights and more hedonistic forms of pleasure, the ultimate impact ranges from delightfully creepy to deeply unsettling.

Other works in the show depart from this fascination with the tactile and sensory pleasures of youth (and its corruption) and enter into the realm of adult everyday experience. In Melissa Brown and Philip Hinge’s paintings, the seductive treatment of surfaces lends sensual intensity to the representation of mundane scenes and objects. Brown’s Renault 5 Turbo and Ocean Oracle 612 dwell on the slippery joys of escapism. Within a mundane interior space, a decorative shell or an elaborate pedicure become portals to remembered or imagined realms of freedom and relaxation. The sly presence of a commercially manufactured blunt hints at a more compulsive aspect of this type of behavior. Meanwhile, Hinge manages to squeeze some juicy associations from an arrangement of fruits and vegetables in his painting Martyrium. The lustily rendered still-life implicitly links gustatory pleasures to other sins of the flesh, while also pointing toward the cultural and religious guilt that is the insidious counterpart of these delights. 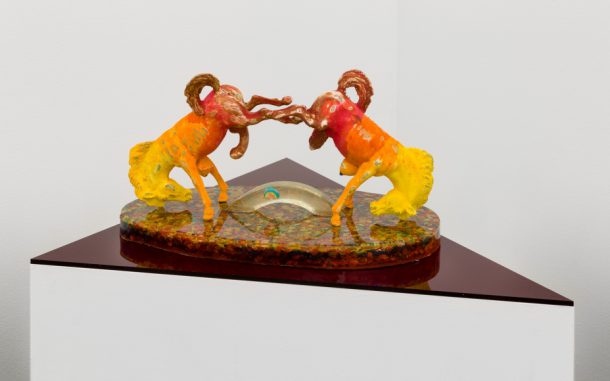 The bulk of the artists in the show were born in the early 1980’s, and explore an aesthetic that is the hallmark of their formative years. For some audiences, myself included, the shudder of recognition that this produces adds an additional layer of resonance. Looking back on that time, it seems to me to have been the moment when things started to tip over into our current unbalanced state. The advertising industry has always sought to stoke the flames of latent consumer desire, and while children have been a target audience for these efforts since its inception, the launch of Nickelodeon in 1979, and the resulting explosion in the popularity and availability of Saturday-morning cartoons created a larger captive audience than ever before.  Due to concurrent developments in offshore manufacturing, there also had never been so much “stuff” to be had at prices that were widely affordable to a middle class at the height of its purchasing power. By the late 1990’s, the emphasis had begun to shift to the Internet, opening the door to our present moment, in which we define ourselves through the acquisition of commodified goods and experiences and manufacture our identities with every upload to Instagram.

The terrifying efficacy of our current ability to “show and tell” who we are through acts of monetary acquisition grew from the seed of those mid-eighties mornings when we collectively parked ourselves in front of our televisions and became a generation defined and unified primarily by the commercial images that danced before our eyes. Desire was uncoupled from direct experience and shifted onto external acquisitory acts at an age when we were not capable of understanding or consenting to this switcheroo. The instability of the concept of self that this shift initiated leads directly to the conflicted understanding of pleasure that the works in this exhibition explore. How do we center ourselves within a momentary experience of pleasure when we have learned that it is not safe to accept anything at face value? Like the Newport ads, pleasure might appear simple, but it tows something sinister and destructive in its wake. Even without a primary experience of the mass media content that was targeted towards the youth of that era, the show succeeds in making its point via the mocking appropriation of the strategies of desire and coercion made infamous by the tobacco industry. 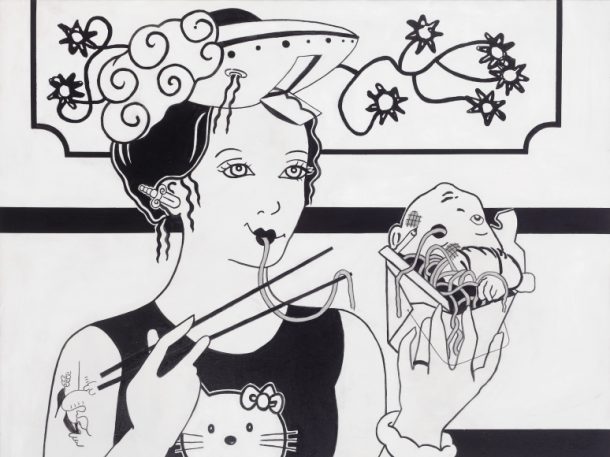 Steve Gianakos, The “Baby What” With Noodles Was a Hit, 2013, acrylic on canvas (Courtesy the artist and Asya Geisberg Gallery)

Alive With Pleasure! is full of unsettling work, but the piece I struggled hardest to accept was Steve Gianakos’s painting, The “Baby What” With Noodles Was a Hit. Gianakos was born in 1938, making him something of a father figure to the the other artists included in the show. He has been mining the territory they are exploring since the early 1970’s, illustrating adult subject matter in a naively cartoonish style. Stripped of the bright colors and eye-catching spangles that lend a palatable gloss to most of the other works in the gallery, his image of an attractive young woman, distractedly savoring a dish of severed baby’s head with noodles, is unapologetically disturbing. My own visceral reaction, of course, points toward the necessity of its inclusion here. The truth is often approached most comfortably from the side. Staring it in the face can be brutal. In drawing a direct parallel between the act of consuming and the act of cannibalism, Gianakos lays bare the quandary that is at the base of this show’s exploration of pleasure–namely, the struggle to maintain a balance between satisfying our needs and desires without allowing them to overtake our basic humanity.