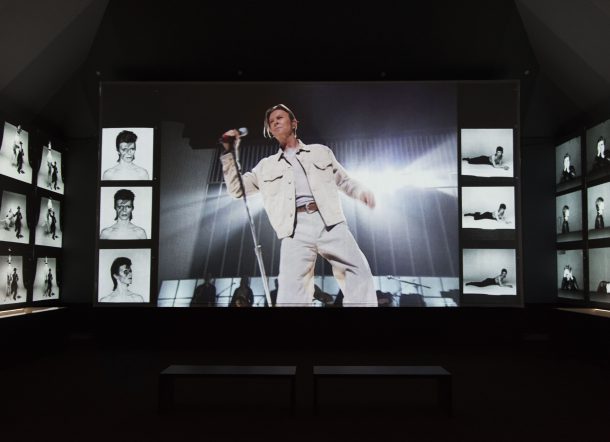 “I can’t give everything away,” were some of the final words heard from David Bowie on this planet on the final track of his last album Blackstar. And true to form, he really didn’t–remaining the man who fell to Earth as much as a mere man since his first inhabitation of the Bowie name until his death in January 2016. While titled David Bowie Is, the current exhibition at the Brooklyn Museum doesn’t dismiss this mythology or force Bowie to take off any of his many masks, even through a staggering collection of over 500 objects.

From enormous video installations showing footage from Bowie’s iconic performances, including a personal favorite stint on Soul Train, to handwritten lyric sheets to his recognizable costumes, David Bowie Is traces Bowie’s development, his artistic influences, his constant experimentation and mind-blowing achievements. And with this gargantuan glut of Bowie goodness, it’s nearly impossible to cover in its entirety in any reasonable or readable manner. The checklist itself is 118 pages. Yikes.

But what it did do, as we discovered after recently visiting the show, was trigger our maniacal, fanatical klepto impulses. There were just certain things in the exhibition we had to have, scoping out exits and watching museum security to see if there was a moment to strike and swipe. Well, since we eventually decided landing in prison over memorabilia would be a bad idea (though seemingly worth it at the time–role model worship is not for the faint of heart), we settled on listing and gushing about the pieces in David Bowie Is that we would like to steal: 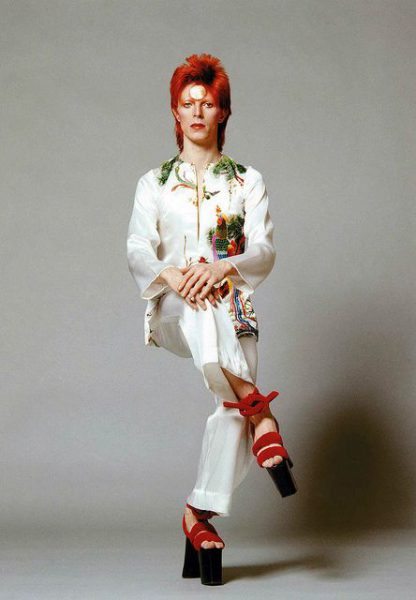 Bowie in THE shoes by Masayoshi Sukita

I would totally snag those platform sandals, designed by Kansai Yamamoto from 1972. They are just about everything a shoe fetishist could ask for and I’d break my ankles with glee wearing them. Yamamoto is responsible for many of Bowie’s sculptural ensembles, including the “Tokyo Pop” vinyl bodysuit (1973), designed by Yamamoto for the Aladdin Sane tour; the “Asymmetric knitted bodysuit” of the same year, and the silk “Ziggy Stardust Cloak” with Bowie’s name in Kanji lettering. But these masterpieces seem too sacred to steal… (Jessica Caroline) 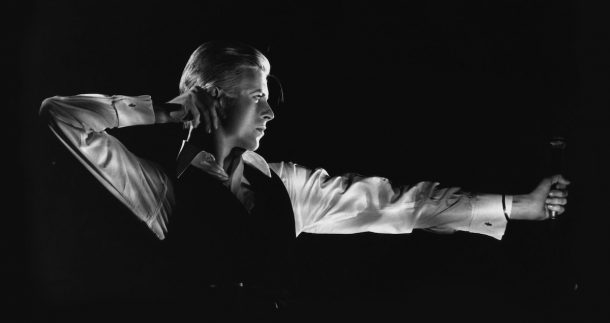 While I love all of Bowie’s many incarnations, I don’t, unfortunately, love them all equally. Sure, everyone admires Ziggy Stardust, but the Bowie persona close to my heart is the Thin White Duke. Reminiscent, at least to me, of how I imagine des Esseintes from A Rebours, the Thin White Duke was among Bowie’s most nihilistic and decadent of visions. Trapped in Los Angeles, taking ungodly amounts of cocaine and becoming more and more paranoid, thin and well, white, Bowie’s corresponding album “Station To Station” even horrified him afterward, mostly because he was in such a state he never remembered making it. That’s how you know it’s good. And sure, Bowie, while inhabiting the Thin White Duke in the mid-1970s, made some awkward semi-fascist statements, but when surviving on milk, red peppers and coke, psychosis is expected. For Bowie, the Thin White Duke was a representation of the abyss–an empty shell or an “ogre” as he would later describe. SOLD. I had to stop myself from running off with mannequin adorned with the suit for “The Thin White Duke,” donning the outfit and making my grand entrance heralding, “The return of the Thin White Duke throwing darts in lovers’ eyes…” (Emily Colucci) 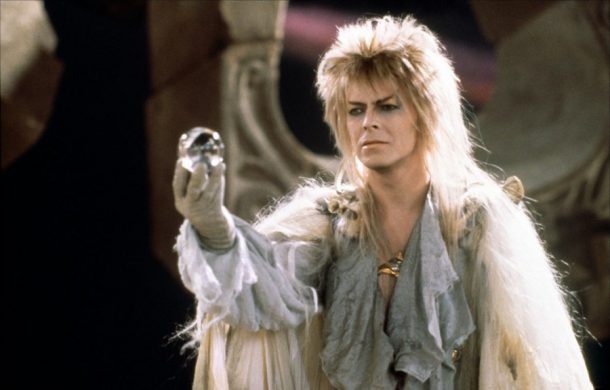 The Goblin King with his coveted crystal ball

Ha! Bowie as des Esseintes, they should have also done a stage version of A Rebours! My first exposure to Bowie was as the Goblin King in Labyrinth, which in spite of all his subsequent incarnations, I never shook the image of him with electrified blonde mane and the ULTRA tight tights with infamous crotch bulge. While there was no wig nor prosthetic penis prop on display (leading one to conclude that both were real deal) the crystal ball in engraved brass mount will look really good on my window sill with all my other weird occult objects and remind me that pretty much all my erotic childhood fantasies are forever encapsulated in this artifact. Throw in the leather riding crop too, for the dungeon. (JC) 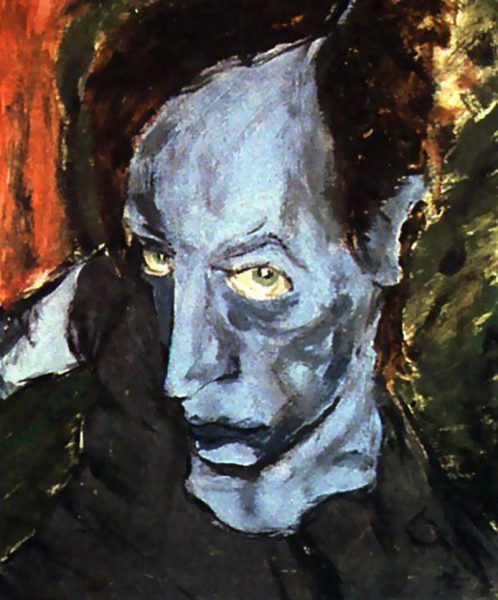 Few people know–ok, two, probably–that Marion and I, when drunkenly constructing Filthy Dreams (the bar) in our minds, envisioned a commercial that would consist of a flickering sign and a petri dish overflowing set to the tune of Iggy Pop’s “Nightclubbing” from his Bowie-produced album The Idiot. While that dream hasn’t died, it would only be fitting to hang Bowie’s semi-hideous paintings of Iggy above the bar. Also it’s probably a good thing Bowie stuck to his day job rather than becoming a full-time painter since these portraits, made in their Berlin years together in the late 1970s, are downright startling. In Bowie’s hands, Iggy transforms from the charismatic, high energy “I Wanna Be Your Dog” Stooge into a monstrous Dum Dum Boy straight out of German expressionism. I’ll take two! (EC) 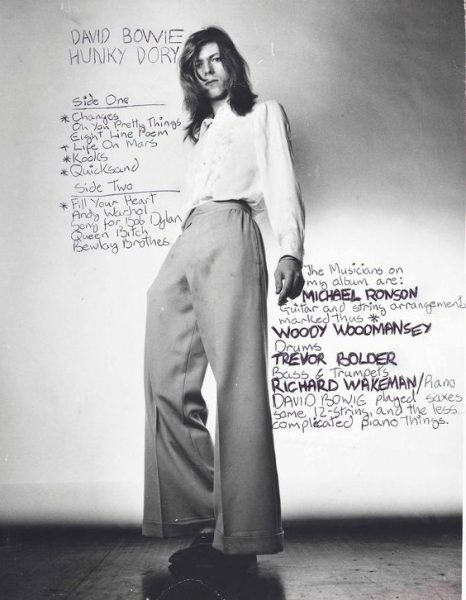 While I appreciated the annotated lyrical pages of tracks such as his hits like “Fashion” and so on, I would have nicked off with annotated lyrics to “The Bewlay Brothers.” It is the final track recorded for Hunky Dory and Bowie is alleged to have said at the time that the lyrics are nonsense, of which is explanatory enough by me when you’re presented poetic gems such as this:

In the blessed and cold
In the crutch-hungry dark
Was where we flayed our mark
Oh, and we were gone
Kings of Oblivion
We were so turned on
In the night walk pavilion

Alas, the back cover of Hunky Dory with annotations will suffice… (JC) 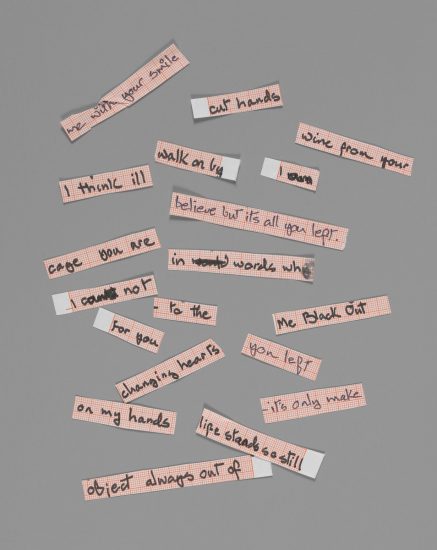 Cut up lyrics for Blackout from Heroes, 1977. Courtesy of The David Bowie Archive. Image © Victoria and Albert Museum

Like Jessica, I also appreciated the page after page of handwritten lyrics, which I longed to touch, but the one I would run off with is a series of cut-ups made for the song “Blackout” from Heroes. David Bowie Is excels at tracing Bowie’s influences and these lyrics trace a particularly queer literary lineage between Bowie and the Third Mind of Williams S. Burroughs and Brion Gysin. While Bowie seems to have used the cut-up technique on several songs, “Blackout” is an apocalyptic classic that is perfect for dramatically shouting in the street (with threatening, dramatic hand movements of course): “OH, YOU! YOU WALK ON PAST!” (EC) 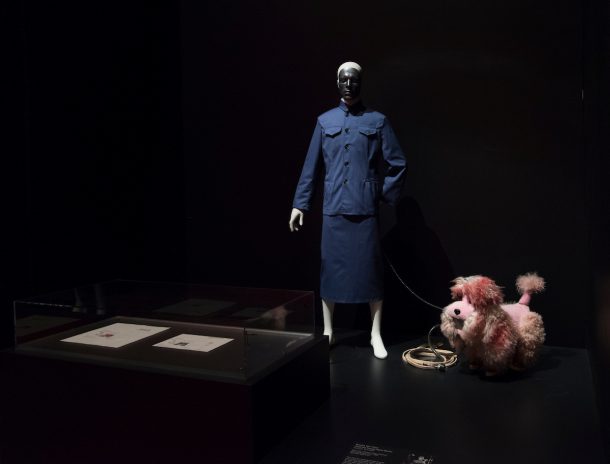 I want that stuffed “Saturday Night Live” toy poodle with the CRT monitor in its mouth. The costume design by Mark Ravitz and Bowie was inspired by Sonia Delaunay’s designs for Tristan Tzara’s 1923 play Le Cœur à gaz (The Gas Heart), collotype of which is also on display. For the second half of the set, Bowie transformed into a sexy librarian ensemble, a skirt suit. You can watch the whole set on Vimeo, performed alongside Downtown art legends Joey Arias and Klaus Nomi. (JC)

I also covet a part of Bowie’s Saturday Night Live performance (I mean, how could I not? Klaus Nomi, Joey Arias and Bowie?! *faints*) and its conception, but rather than fighting Jessica to the death over the poodle, I’m going to palm Bowie’s own drawing of the TVC 15, which apparently is just a TV with sharp pointy teeth. Simple, yet effective. Oh, my TVC 15! (EC) 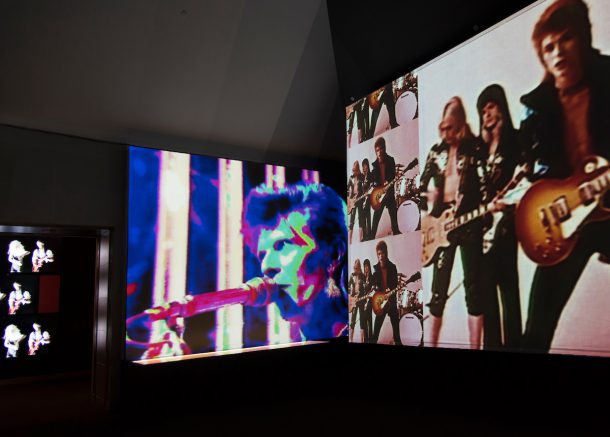 I want the “Diamond Dogs” era cocaine spoon to also add to my window sill. I’ll probably use it to strain tea bags on occasion too. (JC)

As psychotic as my Bowie frenzy can get, it is matched by my screaming, hair-pulling, tear-stained adoration for Elvis and when I saw this, I was ready to smash the vitrine just for this tiny scrap of paper from the King to the Duke. And speaking of cocaine, Bowie apparently wrote his teeth-grinding “Golden Years,” for the King who turned it down. What a pity! I’d gladly cut off a couple fingers or toes to hear that collaboration, but I guess I’ll have to settle with coveting this telefax congratulating Bowie on his “Station to Station” tour. (EC) 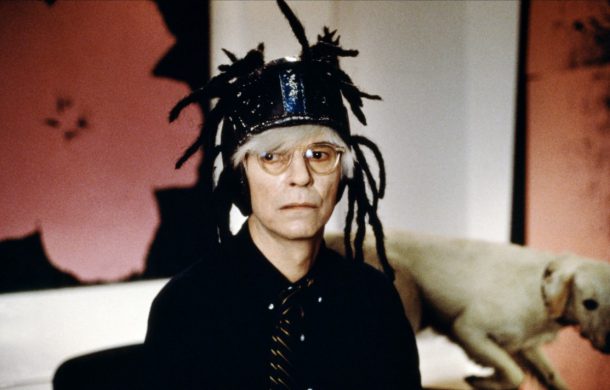 Bowie as Warhol in the helmet in “Basquiat”

I’d also like the Basquiat helmet from 1996, which is essentially a football helmet with synthetic hair. This will come in handy for many Halloweens to come. And it’s probably the only creation by Julian Schnabel that I would actually want to acquire in my personal collection (too harsh?) (JC) 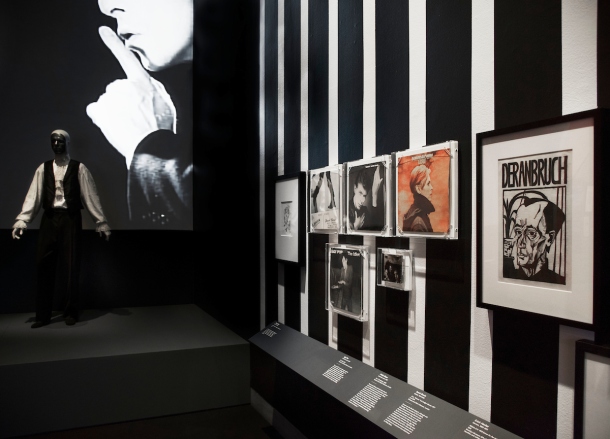 To top off my stalkerish behavior, I’d palm these keys to David Bowie’s Berlin apartment. Sure, he hadn’t lived there in decades, but who cares. Whoever does live there will get a surprise! Let me wander its interior, imagining what stories that apartment could tell while dreaming of sound and visions. (EC)

I want the signed photograph of John Hurt from 1980, because like Bowie, Hurt is an eternal legend. (JC) 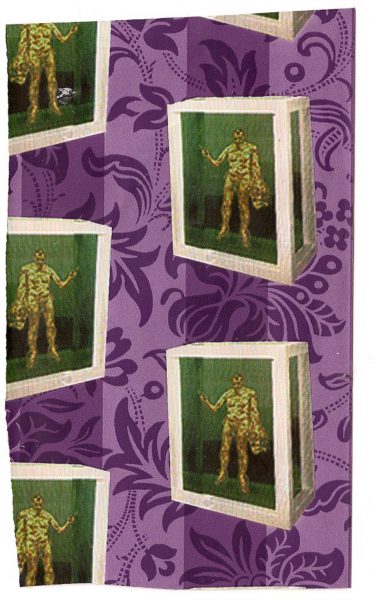 The wallpaper (via Laura Ashley)

When you hear Laura Ashley what do you think of? Muted shabby chic Americana? Kmart? Whatever it is, it’s not typically wallpaper featuring a nude Lucian Freud self-portrait. But, that’s exactly the wallpaper Bowie made, produced by Laura Ashley, for a fashion event called “Pagan FunWear” in honor of the charity War Child. As Paul Gorman recalled, “The fact that this shred depicting the great and serious artist Freud uses as its base a quintessentially English Laura Ashley print makes it funny, and, somehow, for me, very, very Bowie.” At the Brooklyn Museum, the paper was tucked in a dark corner near a TV playing Bowie’s “Boys Keep Swinging.” It’s like nobody would miss it! (EC) 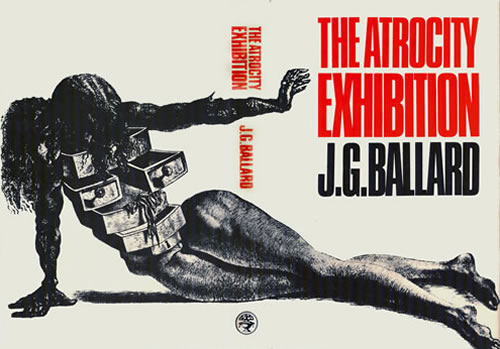 The poster for J.G. Ballard’s The Atrocity Exhibition (‘70) (book cover designer unknown or unacknowledged) will look great in my living room and remind me to finally get around to reading this brutal novel, which influenced Bowie, as well as other artists of his iconic ilk including Grace Jones, Joy Division and The Human League. (JC)

Not all Bowie was masterpiece Bowie. I love Bowie’s bad songs as much as his good–experimentations gone horribly wrong. Though my personal favorite bad Bowie song “Red Sails” (“THE HINTERLAND! THE HINTERLAND! WE’RE GOING TO SAIL TO THE HINTERLAND!”) didn’t even make an appearance in the exhibition, I’ll have to mope around and eventually grab a piece of possibly the worst song Bowie ever made: “The Laughing Gnome.” Don’t believe me? Just listen–it sounds like Alvin & The Chipmunks meets psychedelia. It’s so saccharine, grating and aggressively unlistenable that it becomes heroic in my warped perspective. The sheet music would be a helpful addition to terrorizing a party with this trolling tune. (EC) 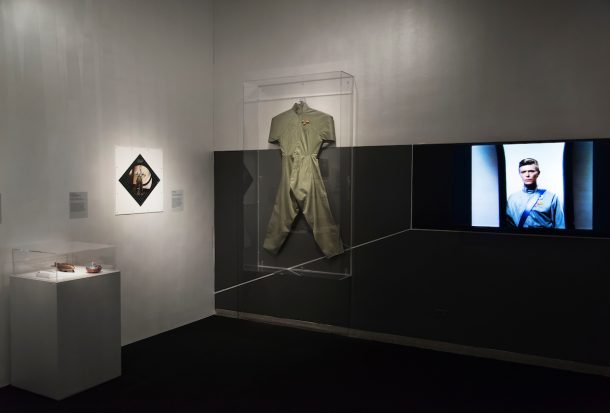 Bowie was an avid art collector himself of British sculptor Eduardo Paolozzi. His Space Patrol Vehicle from the Krazy Kat Arkiv (1950s-60s) looks like a toy Ionel Talpazan would have been given as a child. (JC) 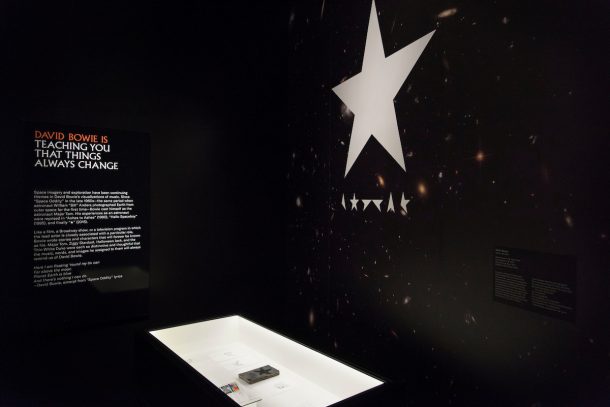 When Bowie died in 2016, I was so deeply affected that I shocked myself. I could cry on command about it right now if I had to. Some of it may have to do with the release of Blackstar, which, in retrospect, foretold, on its release on Friday, January 8, his coming death two days later, including the chilling line: “Where the fuck did Monday go?”  It’s a genius album–a masterpiece of confronting mortality, nihilism and continuing the myth past death. Because of this, I’d definitely build an everlasting shrine to Bowie using these materials related to Blackstar, namely his own sketch of his blindfolded figure from the “Lazarus” video. (EC) 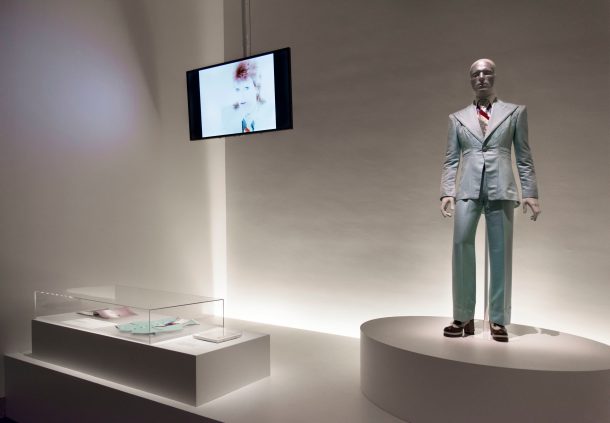 JC: The lizard ring, though I’m not much into jewelry this seems a must, the Drawing on Cigarette Pack from the 1970s, and the Lipstick Blotted Handkerchief Tissue from 1974, just because.

EC: I also guess since we didn’t swipe any of the truly iconic wardrobe pieces on view, I’d run off with the Burretti suit from the “Life On Mars?” video for bragging rights alone and the “Ashes to Ashes” pointed hat, which would be fun to don at parties.

One thought on “Klepto-Bowie-mania: The Items We Would Steal From “David Bowie Is””