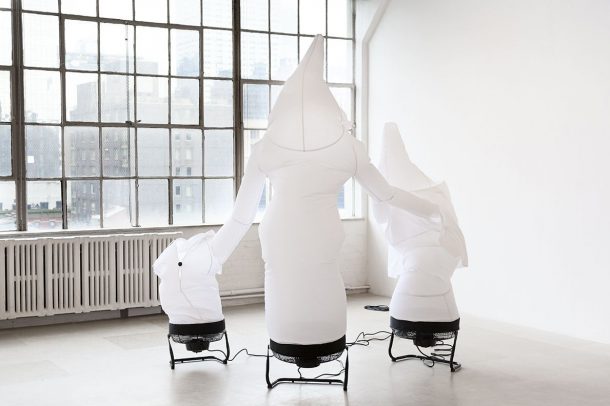 The first thing that hits you upon entering the cavernous space of Greene Naftali is the droning white noise of a dozen industrial grade fans — a noise that, while seemingly neutral and indifferent, could just as easily not register as a consequential sound at all. This mechanically hummed nonsense, which blows hot air into meticulously fashioned clownish “breathers,” encapsulates what I deduced from Paul Chan’s latest solo exhibition Rhi Anima.

At a time where political fraughtness is heightened, it is all too easy to pass as an ally on the bench than an active player in dismantling traditional power structures. Many scholars have noted the ease into which especially non-black artists, gallerists, and art world characters have jumped on the semiotics of racism, particularly black American history, as potent subject matter. Taylor Aldridge states in an article “Black Bodies, White Cubes: The Problem With Contemporary Art’s Appropriation of Race” for ARTnews, “Artists have made systemic racism look sexy; galleries have made it desirable for collectors. It has, in other words, gone mainstream.” Chan’s breathers bear an uncanny resemblance to Laocoön by Sanford Biggers, which Aldridge critiques, and conjures a similar unease.

As I looked upon Chan’s breathers — particularly those that bear resemblance to KKK and executioner hoods — I struggled to find what further emotional acuity or intellectual jouissance he added to these loaded icons of American history. The black hood, which became a symbol of Trayvon Martin and the Black Lives Matter movement, is made into a billowing, hollow specter in Pillowsophia (after Ghostface) (2016). In Chan’s show, its meaning has become so abstracted that some reviews of Rhi Anima have failed to identify what it even refers to. To allow symbols that have ignited black liberation movements to slide into a realm of ambiguity, an act that would precisely benefit white supremacy, feels dangerous and irresponsible. Actively rendering solemn images such as black and white hoods as laughable or playful — does this not fall into the same line of work as alt-right memelords, imbuing lightness and good humor into Nazi swastikas and Hitler solutes? Or, perhaps Chan’s transformation of these characters into the dancing balloon figures outside car dealerships is commenting on the proliferation of identity politics as clickbait and controversy as capitalist spectacle–a much more believable narrative if he wasn’t so insistent on Aristotle and Western philosophers.

East Asians have made headlines recently with their slippery footing in identity politics and political correctness. Shia Labeouf’s art piece He will not divide us was trolled by a Trump-supporting “Uncle Chang” Eugene Li, who defended white nationalists in a statement dismissing people of color. Whitney Biennial Curators Christopher Lew and Mia Locks were brought to justice by black protesters against their decision to show Dana Schutz’s exploitation of black pain, Open Casket (2016). At the panel discussion at the Whitney Museum hosted by Claudia Rankine and The Racial Imaginary Institute to confront the backlash, East Asian panelists fumbled with appropriate responses to the offense, neglecting to confront the privileges of social mobility afforded to East Asians due to model minority myth. Herb Tam, Curator at the Museum of Chinese in America, seemed to defend the curators and Schutz’s self-proclaimed empathy by comparing Emmett Till to Vincent Chin, a Chinese American man who died at the hands of xenophobic white men. Ryan Lee Wong wrote the slapstick article “A Syllabus for Making Work About Race as a White Artist in America” in response to the Schutz controversy, adding a twinge of humor as he demanded white artists confront whiteness if they wished to make work about race. It would have been more appropriate, in a situation where two East Asian curators committed offense, to ask East Asians to confront the particularities and privileges of what it means to be East Asian in America–a missing component of all these prominent discussions on race from the East Asian perspective. 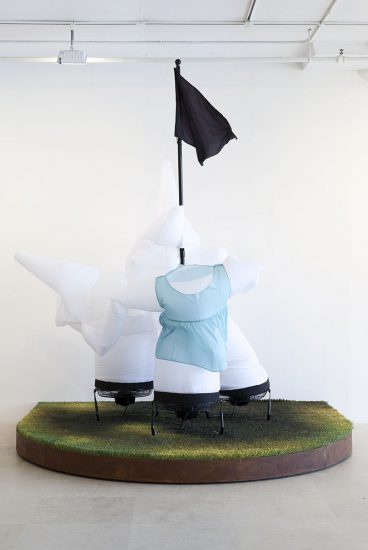 Paul Chan was ironically quoted in Dawn Chan’s article in Artforum on Asia-futurism, a plea for more artists and curators to see Asians as existing in the present, and I saw Rhi Anima as a lost opportunity to articulate this reality. Although it is unfair to relegate every artist into only exploring their own identity in their artwork, I found it peculiar that Chan would paint a black-and-white portrait of the human condition in a way that would erase consciousness or sensitivity towards his own selfhood.

Meanwhile, the black community continues to demand more visible explorations of whiteness as a perpetrator. Aria Dean, curator of Rhizome, said in Facebook post elaborating on her decision to sign Hannah Black’s letter, “It is very fun to play tourist and dip your toe into the deep waters of the artistic, intellectual, political, and emotional work that has been done in the service of commenting on, surviving, and destroying the antiblackness that permeates every last nook and cranny of American civil society. It is very fun to become the center of controversy and fancy yourself transgressive. It is all very, very fun.” Chan’s Rhi Anima manifests this exact playground of fantastical, nihilistic, pseudo-political gestures. Visitors snapped selfies and “boomerangs” in the gallery for their Instagram, while I left longing for more East Asians to reach full consciousness and hold each other to task.