In the first hour of Blue is the Warmest Color, the lead character, who also gives her name to the original title of the film, La Vie d’Adèle, finds herself in a discussion about Antigone in her literature class. This is not a coincidence for sure–Antigone, being the symbol of female potency and resistance towards masculine power, can be used as a symbol in a film that is basically centered around lesbian love. Child of an incestuous intercourse between Oedipus and his mother, Antigone has been the symbol of “everything that is not lady-like” in Greek mythology. Rejecting motherhood, standing against Gods’ decision and burying her traitor brother with her own hands and then finally executing her own death again with her own hands, Antigone is the trademark for “bad girl” in Greek mythology where there is a shortage in this quota. 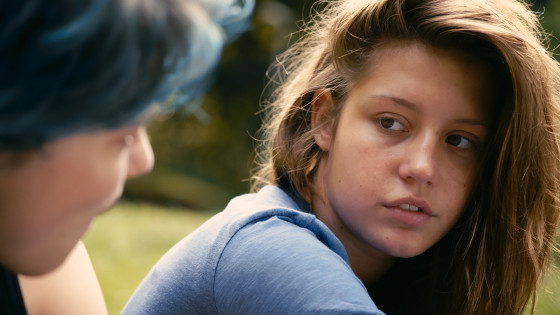 Still from “Blue is the Warmest Color”

Blue is the Warmest Color, director Abdellatif Kechiche’s Cannes darling film about love and the devastation it brings, is a 180-minute long documentation of how one grows up while holding on to her own destiny like Antigone. More than depicting a passionate, roller-coaster love story as it is suggested (every love story, especially in films, is passionate and carries an up & down nature for its both parties), the whole film is a step-by-step description of how a girl grows up to be a woman.

The original title of the film, meaning “‘the life of Adèle” makes this separation much more clear since there is not even a single scene without our lovely Adèle throughout the film. She is as tempestuous as any other female lead that cinema or literature have ever met. She is no different than Ada in The Piano or Defeo’s Moll Flanders in terms of finding the perfect tragedy for her and strongly grabbing onto it until it falls into pieces in her arms. Adèle’s tragedy is first love. It is towards another girl: a girl that she is totally different from, as well as similar to, at the same time. It is not a love story that is so much different from any other love story.

The elements that make this film so vividly strong are the unbelievably natural and raw performance of its main actress Adèle Exarchopoulos, the incredibly simple yet striking portrayal of an otherwise ordinary love story by its director and, last but not least, those uniquely choreographed sex scenes that serve as the true speakers of the relationship we are witnessing.

Even though many other films about “two girls” like Heavenly Creatures or Baise-moi, content wise, seem to be harder pills to swallow, this one here leaves a bitter and stronger taste in our taste buds, all coming from the simplicity and the honesty of the story. What happens to Adèle could happen or has already happened to all of us. In the end, aren’t we all potential Antigone’s that are calming down so many storms inside?