Some artists’ talents come from a place that is raw, instinctive and purely untamed. Their magnificence and artistry lie in their natural urge for the simplest yet the most essential modes of expression. An artist can religiously present us one certain act throughout his career and each time prove the craftsmanship that he naturally owns. These artists’ trademarks become almost their signatures, representing assorted themes from political to personal, even though they strike back in different settings and even mediums in these artists’ works.

Smiley goats that are as human as all of us, lovers that are floating in the air as they burn with passion or small yet condensed Jewish villages in cold Russia are all among what the recently opened Marc Chagall exhibition Love, War and Exile at The Jewish Museum offers. This new exhibition focuses on a very crucial period in the artist’s life–his escape to the United States after being faced with the Nazi regime in Europe followed by the loss of his beloved wife Bella.

The curation of the exhibition puts a special emphasis on Chagall’s interest in painting motifs from the Russian Christian icon tradition by bringing together many works that depict Christ in the crucified position. His signature colors and pastoral depictions along with his bitter sweet mood once again remind us that some artists, painters to be more precise, mark their existence so strongly and gently through their one of a kind and otherwise “kitschy” styles that the test of time still approves of their artistic ability.

Chagall when considered in today’s art dynamics (and even for a century ago) stands out as considerably naive and even too pastoral. For many, he’s regarded to be overtly mellow and folkloric; and yes, it wouldn’t be incorrect to make these comments for his art. Yet, his festive and enchanting portrayals of his goats or lovers all offer a short but harmless getaway from everything we are used to see–in and outside the museums. 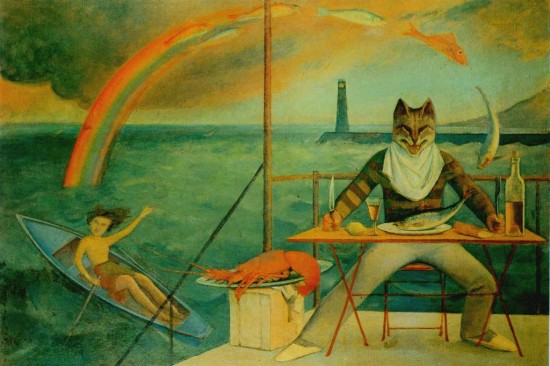 Steps away from The Jewish Museum, at The Met, another master of painting is waiting to embrace his guests on his not-that-safe-like-Chagall’s lap.

The Balthus exhibition, titled Cats and Girls, offers a journey to the intertwined worlds of humans and animals like Chagall’s, but Balthus’s unsafe intentions are not as naive as his counterpart’s. Known for his portrayals of ambiguously positioned Lolita-esque girls, Balthus was also effected by the World War II as many artists were in Europe. Similar to Chagall, this eventually influenced his art both thematically and stylistically.

In this exhibition, Balthus’s depiction of cats sometimes with and sometimes sans young little girls put the viewers into discussions about the vague yet dominant sexual charge that these paintings carry out. Similar to Chagall and his goats, Balthus continuously brings back the cat imagery in these paintings to his young girls, however different from the previous painter, Balthus’ intentions (or artistic attempts) are arguably different.

Cunning and furtive-looking cats that are scattered around the canvases serve to transfer the artist’s discomfort towards the political turbulence of his time as well as being tools to metaphorically portray himself as standing next to these young girls. What Balthus is aiming to transfer with these cats is inarguably darker, harsher and yes scandalous then Chagall’s.

6 thoughts on “Good Intentions vs Dark Intentions: A Look at Two Masters of 20th Century Painting”