Near the beginning of A Bigger Splash, Jack Hazan’s newly restored 1974 semi-fictionalized film about British artist David Hockney, the artist’s studio assistant Mo McDermott says in a voiceover, “When love goes wrong, more than two people are affected.” When it comes to Hockney, he’s right. Hazan gives us an intimate look into how forcefully love can complicate and subsume all other aspects of life. The basic elements of the story involve the falling out between Hockney and his American boyfriend Peter Schlesinger. Most everything else in Hockney’s life is uncertain. Only one fact is discerned: his professional reputation radiates just as his personal relationships fade away. The outcomes are unimportant; it’s the unraveling that concerns A Bigger Splash.

Hockey is something of an entropic force in his social and professional circles (Towards the end of the film, almost no one is shown talking to him). In one scene, his inability to produce new work after the breakup forces his gallerist to beg for more paintings. Hockney, clearly not ready to let go of his latest subject, Schlesinger, replies with his characteristically disarming charm, “I think I’ll go now.” He eventually completes his landmark Portrait of an Artist (Pool with two Figures) from 1972 after laboring over it for six months by changing the likeness of the central figure to resemble Schlesinger. After this breakthrough, he completes the piece in an astonishing two weeks. A grand addition to the canon of art history to be sure, but Hockney invited Schlesinger to model as a way to get him back into his life. Instead, he finished a painting.

Hazan depicts a world of artists and hangers-on who seek each other out, and seize upon their time in ways that are less than sympathetic. Stroking the egos of an artist can be a fraught errand. In one of the most original scenes in the film, Hockney visits with a fellow painter, Peter Procktor (a man who is easily flattered by a comparison to John Singer Sargent). Procktor’s likeness is portrayed smoking a cigarette in a long rectangular canvas as tall as Hockney himself. Hockney pulls out his lighter, produces a flame, and brings it close to the canvas, as if to light the cigarette. It’s a moment of excruciating uncertainty. His near act of vandalism foreshadows a later moment when Hockney takes a knife to one of his own canvases in an act of liberation. It’s the point in which Hockney finally moves forward with Portrait of an Artist.

Hazan often aims his camera from the vantage point of a lower angle, as if he is looking up at his subjects from a hidden corner of the room. In these instances, the camera plays a double role. It’s exhilarating to witness something you may subtly feel you’re not supposed to, but it also allows you to feel as if you are a part of the scene in a close personal way. During a scene at a fashion show, we see the models on stage from the perspective of those seated in the audience. Hockney looks up at the statuesque models, made so by their slim, billowing dresses and platform sandals. In those fragments of faces, chests, dresses, and heels, all in sinuous motion, we too sit beside Hockney. The same is true for a beauty pageant scene whose crowded audience sit on the floor leaving only a thin line of space for Miss “Issippi” to claim her crown. The camera darts around the room like someone looking for a familiar face in a crowd. For Hockney, it’s Schlesinger.

Watching the film, I felt the urge to drop all pretenses and submit to the fabrication of the movie, as it is impossible to tell fact from fiction forty years out. Still, there is an uneasy quality to the film’s voyeurism, like a humidity in the air that is impossible to ignore, that primarily has to do with the score. Piercing strings create tension in unexpected moments in a manner that is more often associated with horror. All the best scary movies play on the unseen presence of other people or entities. The more extreme these obfuscations are, the greater the scare. The same is true in A Bigger Splash, only it’s the audience that are privy to those private moments. There are no masks, no veils, there aren’t even actors. Real life is challenging enough.

The film lingers on the characters in their most intimate moments. Consequently, we spend much time walking through empty apartments, silencing alarm clocks at the start of an early morning (“Jesus Christ!” McDermott says), and, most often, fussing around in bathrooms. In a since-disappeared interview with Vice, Hazan claims that Hockney didn’t even know that the cameras were rolling in a notable shower scene. The troubling implications of that statement reiterates the film’s central theme of never quite knowing what we think we know. The audience, just as the people in the film, aren’t sure where they stand in relation to the filming. Is the shower scene a moment of genuine voyeurism (a role the audience may not be prepared to take), or is it merely a play at voyeurism? In other words, are there consequences? (In the same interview, Hazan claims that the premier of the film drove Hockney into a weeks-long depression). Nevertheless, we watch Hockney strip naked, remove his iconic coke bottle glasses, and step into a shower oddly festooned with many rows of shower jets. The blue tiles of the shower transform into the blue water of a California pool in a fantasy scene involving Schlesinger and several other nude men. “Would you like to play with us?” they invite us into Hockney’s reverie.

The state of California emerges as a suntanned seductress from Hockney’s fantasies, which are inextricably tied to the area’s lure. The Golden State is not only the site of so many of Hockney’s early successes (the film’s namesake comes from a painting Hockney created in the state in 1967), it is also where he first met Schlesinger. The California native attended a drawing class at UCLA taught by the artist. Like Los Angeles, Schlesinger lacks a history to ground him in a contemporary reality or establish an identity outside of his relationship with Hockney. This lack of context is by no means a shortcoming. Schlesinger’s obscurity is what makes him a compelling, if undeserved figure.

In 1965, Susan Sontag wrote in her journal, “Every art incarnates a sexual fantasy.” It’s a blunt conclusion to the famous ending to “Against Interpretation”: “In place of a hermeneutics we need an erotics of art” (Sontag, too, during the height of her literary fame, devoted most of her private moments to agonizing over romantic love and loss). Pleasure, Sontag says, doesn’t take a stand. Likewise, desire doesn’t need a position. Hazan doesn’t provide any significant resolution to the film other than a staged scene of a handsome Schlesinger in his loft dancing alone in his underwear. Right to the very end, Schlesinger is shown as an object of desire.

Physical beauty works like a salve on the movie’s through-line of desperation. I don’t want to underestimate Schlesinger’s exemplary good looks. In the film he appears as a seraph, whose virtue comes from his opacity— allowing the viewer to project his own desires onto him much in the same way Hockney does throughout the film. Never do we hear him speak. His impoverished speech only focuses our attention on his body. Surely no vocal utterance could inspire as much of an erotic pull as a tanned torso. What words would sound better than splashing water as his serpentine body glides across the basin of a California pool, his wet blonde hair glistening as he emerges to lay beside the sun-kissed flesh of three other handsome and handsey men? 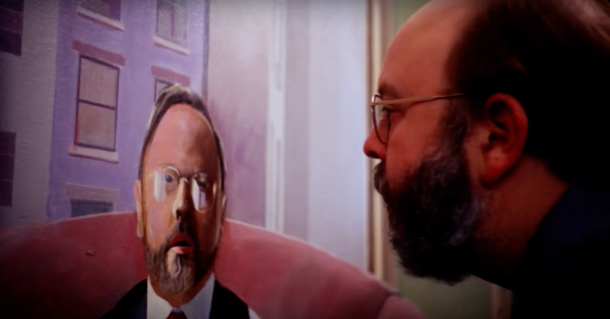 Every person in the film shares this quality of impenetrability, so eclipsed are they by the rupture of the breakup. Hazan purposefully does not introduce characters as would be expected in a traditional documentary. Such stars as British textile designer Celia Birtwell and Metropolitan Museum of Art curator Henry Geldzahler drift in and out of the film purely in relation to Hockney himself, giving the viewer a sense that they showed up to the theatre halfway through the movie. The only time in which we get a sense of the importance of these figures in their own right is when they stand in front of and replicate the poses of Hockney’s double portraits— the ones that made him famous in the late 1960s and early 1970s. We don’t get a close look at their lives. All we have to hold onto is their beauty.

Maria Bastos-Stanek is a writer based in New York. She writes for the arts blog Sem Titulo.