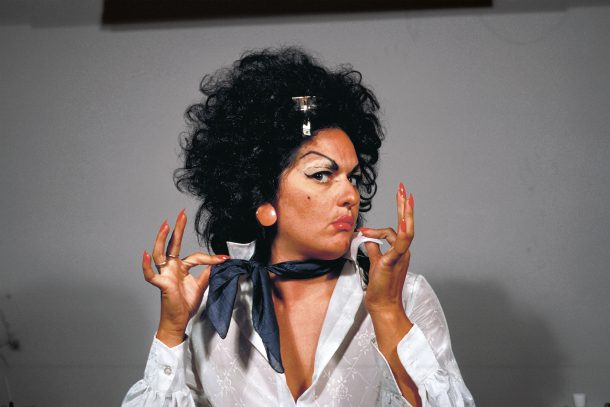 In Brown: The Last Discovery of America, Richard Rodriguez articulates the particularities of brownness, partially based on his own queer Chicano identity. “Brown,” he writes, “bleeds through the straight line, unstaunchable–the line separating black from white, for example. Brown confuses. Brown forms at the border of contradiction (the ability of language to express two or several things at once, the ability of bodies to experience two or several things at once).”

It shouldn’t be too much a surprise that brownness and its fluid borders, as Rodriguez notes, confuses the still-very-white art world. Just look at The New York Times’s cringe-worthy “What is this Latinx thing” article, or the continued underrepresentation of Latinx and Chicanx artists. Not only taking stock of the art world at large, but the institutional representation of queerness, too, often presumes a white face. Thankfully, this is changing with exhibitions including the Brooklyn Museum’s recent Radical Women: Latin American Art, 1960-1985 and the traveling exhibition Axis Mundo: Queer Networks in Chicano L.A., which is currently on view at the Hunter College Art Galleries. 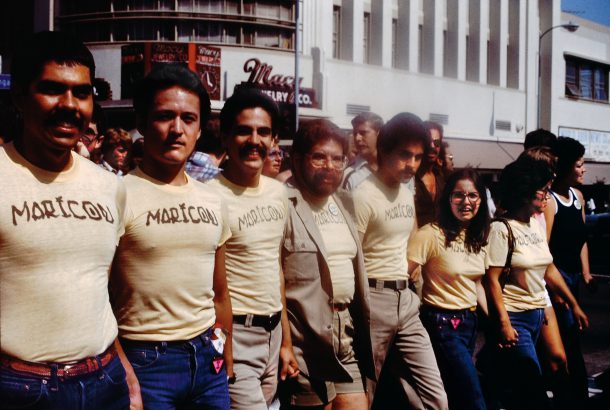 Curated by C. Ondine Chavoya and David Evans Frantz as a part of last year’s Pacific Standard Time: LA/LA and developed and organized as a traveling show by Independent Curators International, Axis Mundo, put simply, is an exhibition defined by intersectionality. First, and most obviously, the show features artists who identify as both queer and Chicanx. Of course, queerness denotes a certain type of sexual and gender fluidity, but Chicanx too embraces hybridity. As Juana Maria Rodriguez writes in Queer Latinidad: Identity Practices, Discursive Spaces, Chicanx is a “claim from outside the space of national identity to assert a new culture born of Mexican, Anglo and Indigenous hybridity. It also serves as a claim against U.S. occupation of Mexican and/or Indigenous lands” (11). Taken together, queer Chicanx, as depicted in Axis Mundo, like Rodriguez’s queer latinidad, embodies “spastic contradictions and wild paradoxes of bodies and sites, identities and spaces intersecting…” (9).

However, Axis Mundo is not just a show based on identity, which would be all-too-simple. Rather than an essentialist view, the exhibition also traces the ongoing collaborations and creative communications between these artists, exposing their self-fashioned and constructed network. The title’s choice of “network” rather than “community” is an intriguing and, at least in my mind, significant decision. Community, for better or for worse, can be a fraught term, particularly for marginalized people with intersectional identities. For example, what place do queer Chicanx people have in the LGBTQ community when the LGBTQ community can be continually dominated by white voices? Network, on the other hand, implies action–not necessarily in terms of the butt-kissing networking made at gallery dinners, but a conscious determination to link likeminded artists and other creatives across the sprawl of Los Angeles and into other artistic communities. Spanning the 1960s until the 1990s, the show deftly depicts how queer Chicanx artists carved out their own spaces in the lily-white, bone-straight art world, as well as merged aesthetics with politics, ranging from the Chicano Movement to feminism to AIDS activism. 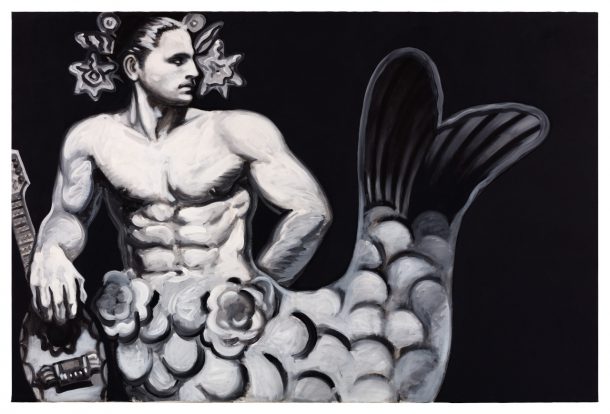 The New York incarnation of Axis Mundo is split between two of Hunter College’s galleries–Tribeca’s 205 Hudson Gallery and the Upper East Side’s Bertha and Karl Leubsdorf Gallery. While the two galleries host distinct segments of the exhibition, many of the artists appear in both parts, perhaps unintentionally symbolizing the continued connections between these artists. One of the artists that appears both Uptown and Downtown is the show’s namesake Edmundo “Mundo” Meza, a seminal and central figure whose multidisciplinary pursuits found him in numerous collaborations from window displays to performances, as well as appearing in other’s artists’ work as seen in decadent portraits by Steven Arnold. Mostly, though, Meza was a painter. His early brightly colored, drag-like paintings, on view Uptown, contrast with his looser and larger black-and-white male nudes and hunky mermen that, in their resemblance to Luis Frangella’s work, wouldn’t look out of place painted on the walls of the Pier 34, located just blocks away.

Some familiar names and faces pop up throughout the exhibition including AIDS activist Ray Navarro, whose appearance as Jesus at ACT UP’s Stop The Church action is stuff of NYC legend, punk firebrand Alice Bag from the Bags, Vaginal Davis, Jack Smith, Cosey Fanni Tutti and Genesis Breyer P-Orridge and fashionista Simon Doonan, who worked with Mundo Meza on a series of window displays for Maxfield Bleu. However, I’ll admit I wasn’t familiar with many of the artists on view. Part of the problem is that the New York art world, even though we’ll deny it until we’re blue in the face, is quite provincial. While we’ll obsess about the bygone days of our own underground subculture, we’ll rarely acknowledge that L.A. had its own raunchy and radical scene that was both mining similar themes and artistic strategies and in direct dialogue with many of our dearest figures on the East Coast. 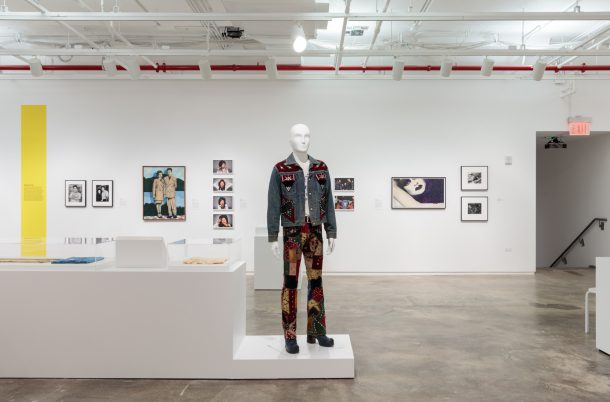 Luckily, Axis Mundo provides such an enormous expanse of included materials, from paintings and drawings to zines and fashion, including Robert Lambert’s flashy and fabulous Les Petites Bonbons rhinestone-covered denim jacket and velvet quilted pants. Unsurprisingly for artists dealing with a phobic art world, DIY artistic strategies were the name of the game, including artist-run spaces like LACE (Los Angeles Contemporary Exhibitions), mail art and zines like Homeboy Beautiful, Fetish Confidential and my personal favorite The Gay Death List, published by Gerardo Velázquez who would bestow this mix of science, art criticism and humor to bars, Pride parades and anywhere else HIV/AIDS prevention materials would be located. 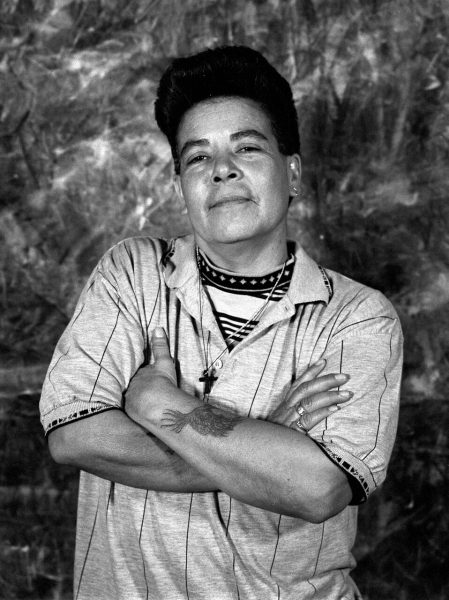 To try to put some order into this glut of artistic expression, the curators split the show into a litany of sections such as Role Models, Chicano Chic and Mystical Camp, which attempt to lay out certain overarching themes that run through the show. The truth is, however, that there are so many overlapping aspects to the show that each viewer could leave with a different experience, depending on their particular interests. There’s the embrace of nightlife as an essential communal space for queer Chicanx folks as seen in Laura Aguilar’s Plush Pony series, which depicts queer women who would frequent the lesbian bar in El Sereno. There’s also radical reappropriations of phobic terms like Joey Terrill’s deliciously confrontational T-shirts emblazoned with the words malflora and maricón, slurs for lesbian and faggot, respectively. And there’s also a heavy dose of punk with bands like Nervous Gender, whose music is just on the edge of unlistenable (just as I like it). Started by Gerardo Velázquez, Edward Stapleton, Phranc and Michael Ochoa, many of whom have visual artwork in the show, Nervous Gender’s in-your-face songs and music videos like the startlingly named “Leather Poltergeist” led them to be hilariously described by the Los Angeles Times as “the thorn in the side of the L.A. music scene.” Well, I’m sold! 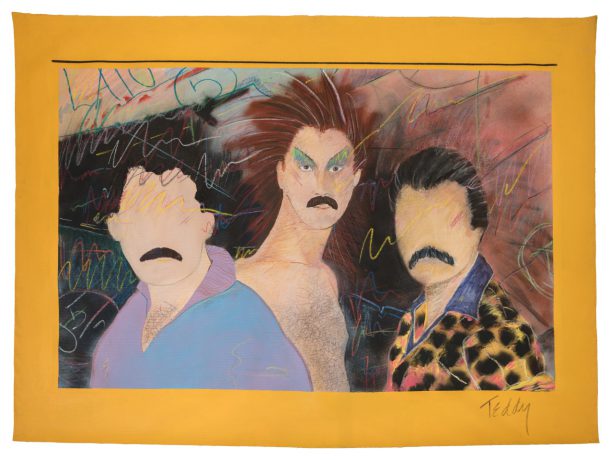 Above all, for me, given my recent obsession with camp as a resistant artistic tactic, I was struck by the sheer amount of wit that pervaded the exhibition. From Phranc’s butch paperdoll of activist Jeanne Córdova to Teddy Sandoval’s quirky and portrayal of the quintessentially 1980s masculinity Las Locas, much of the artists in the show infused their radical politics with humor. Take, for example, Judith F. Baca’s Vanity Table. A series of photographs hung vertically, the images narrate Baca’s performance for Las Chicanas: Venus de la Mujer in which she made herself up into the Pachuca. With her bouffant hairdo, severe slash of eyeliner and a sneer, she looks as if she came right out of John Waters’s early films. I think I’m in love! By heralding a throwback to 1940s Chicana style, Baca threatens the camera with a razor blade, turning this vintage classic look into a dangerous woman. Now that’s my kind of feminism–bad girls. 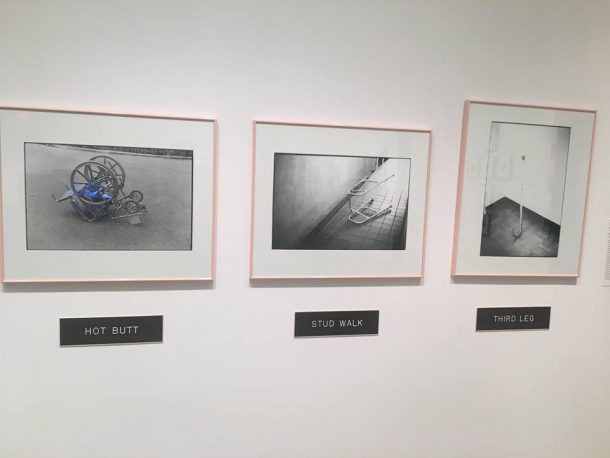 While Baca’s work seems to adhere to more classic styles of campiness, other works use humor to both represent and critique the experiences of illness and disability like Ray Navarro’s piece Equipped. Made with Zoe Leonard, who took the photographs since, at this point, Navarro was blind due to AIDS-related CMV retinitis, Equipped is a series of three photographs of mobility devices–a wheelchair, a walker and a cane. Below the photographs, bureaucratic and stuffy office-style plaques hang, emblazoned with a *wink wink nudge nudge*-style sexy phrase. A wheelchair is rebranded as “hot butt,” the walker is “stud walk” and the cane becomes a “third leg.” With this suggestiveness, mobility devices are rendered as sensual objects, almost sex toys, directly challenging the depiction of disabled and/or ill people in mainstream dominant culture. Particularly for people with AIDS, many of the images in the media, when not condemning gay men as hypersexual, were of emaciated men dying in hospital beds. In contrast, Navarro returns sexuality to those that are ill or disabled. If this weren’t enough, Navarro also brings race into his critique, framing each photograph in a pale pink color reminiscent of the raw chicken Caucasian white that these mobility devices frequently come in. Even disease and disability, as Navarro shows, is influenced by white supremacy.

Overall, Axis Mundo is a thrilling viewing experience, but also a frustrating one, only in that many of these artists should be been given institutional attention long before now. Frankly, for the art world, it’s embarrassing. For example, even though I took a course on contemporary art in Los Angeles in my grad school years, the curriculum was still, unsurprisingly, very, very white. While we learned about The Screamers, which in a stuffy Upper East Side building filled with Art Bros and the children of museum directors still felt subversive, Nervous Gender was nowhere to be found. Thankfully, though, Axis Mundo does its part to revise this narrative by making contemporary Los Angeles art history a little more brown and queer. And hopefully, this is just the beginning.

One thought on “Down On The West Coast: Tracing The Intersections In “Axis Mundo: Queer Networks In Chicano L.A.””