In Pefume Genius’ song “Queen” off of their recently released album Too Bright, Mike Hadreas, the musician behind Perfume Genius, presents a defiant embrace of the homophobic stereotypes and fears surrounding gay effeminacy, namely the assumptions that effeminate gay men are diseased, threats to “The Family” and abject bottoms. Likewise, Robert Gober’s retrospective The Heart Is Not A Metaphor  at the Museum of Modern Art resonates with a similar frank presentation of queer sexuality and homophobic notions surrounding it.

Curated by Ann Temkin and Paulina Pobocha, who worked closely with the artist himself, The Heart Is Not A Metaphor presents the first large-scale retrospective of Gober’s work in the United States. While the heart may not be a metaphor in Gober’s show, which takes its title from a line in Elizabeth Hardwick’s novel Sleepless Nights, everything else in the exhibition certainly is, filled with drains, sinks, wedding dresses, numerous bags of kitty litter and rat poison and some surprisingly anal donuts. Examining this thoroughly multidisciplinary artist, the works in the exhibition range from overwhelming immersive installations to his small early paintings, linking his varied work through his frequent references to queer sexuality, Catholicism and the ongoing HIV/AIDS crisis.

An AIDS activist himself as an artist working during the height of the crisis in New York, Gober’s work blends the outspoken activism of David Wojnarowicz, who appears in Gober’s evocative 1992 Untitled installation with his obituary on the top of one of the multiple stacks of newspapers, as well as the silent and minimalist mourning of Felix Gonzalez-Torres and Jim Hodges. Like Hodges and Gonzalez-Torres, Gober employs a highly metaphorical visual language to express the horror, fear, anger and grief inherent in being a gay man during the AIDS crisis.

Don’t you know your queen?
Gleaning, wrapped in golden leaves
Don’t you know me
Rank, ragged
Skin sewn on sheets
Case in the barracks
For an ass to break and harness into the fold
Mary

Like Gober and consequently like Perfume Genius’ “riddled with disease” queens, theorist Leo Bersani’s seminal 1987 essay “Is the Rectum A Grave?” investigates this panic-stricken representation of passive sex during the HIV/AIDS crisis.

Beginning with the perceived cultural aversion to sex, one that became especially apparent during the 1980s and 1990s, Bersani states, “The aversion I refer to comes in both benign and malignant forms. Malignant aversion has recently had an extraordinary opportunity both to express (and to expose) itself and tragically, to demonstrate its power. I’m thinking of course of responses to AIDS–more specifically, of how a public health crisis has been treated like an unprecedented sexual threat.” (198).

Referencing Simon Watney’s book Policing Desire, which analyzes the largely horrifying media responses to HIV/AIDS, Bersani quotes Watney’s observation that “AIDS is not only a medical crisis on an unparalleled scale, it involves a crisis of representation itself, a crisis over the entire framing of knowledge about the human body and its capacities for sexual pleasure” (198).

Similar to Bersani’s observation of gay men being seen as contaminated bodies during the mid-1980s, Gober’s sculptures also depict this AIDS crisis-era horror of bottoming and its inescapable link to the individual’s body. In Gober’s Untitled, Gober places a disembodied underwear-clad ass and legs face(less) down on the floor. Covered in drains that recall Kaposi’s Sarcoma lesions, Gober’s sculpture undeniably conveys the submissive bottom, engaging with the homophobic discourse around gay sexuality as threatening during the height of the AIDS crisis.

Revealing the dangerous discourse from the medical establishment condemning the assumed promiscuity of gay sex in bathhouses, as well as gay men themselves, Bersani begins his essay with a shocking quote by John Hopkins Medical School Professor Opendra Narayan, who said, “These people have sex twenty to thirty times a night…a man comes along and goes from anus to anus and in a single night will act as a mosquito transferring infected cells on his penis. When this is practiced for a year, with a man having three thousand sexual intercourse, one can readily understand this massive epidemic that is currently upon us” (197).

Evoking anonymous bathroom encounters, urinals and the rapidly closing bathhouses, which were threatened due to rhetoric like Narayan’s, Gober’s early sink sculptures also exude a highly sexualized undertone, one that goes easily unnoticed through Gober’s minimalist aesthetic. Beginning in 1983, Gober’s early sinks are essentially portraits of specific sinks, including Gober’s own sink from his childhood. Later, Gober began distorting the sinks, becoming more hallucinatory and surreal.

Rather than an simplistic condemnation of these homophobic assumptions, Gober instead presents a more subversive commentary on the rhetoric surrounding sex during the AIDS crisis. While certainly not as negative as Lee Edelman’s turn against “The Child” and the future in No Future, Gober’s bold portrayal of the negative views of gay men, particularly during the AIDS crisis, is a significant transgression against both heteronormativity, as well as the homonormative, largely hyper-masculine top representation of accepted gayness.

In “Is The Rectum A Grave?,” Bersani theorizes passive sex as inherently self-shattering, a power he believes could be harnessed for transformative politics. Encouraging an embrace of this self-shattering, Bersani notes, “But what if we said, for example, not that it is wrong to think of so-called passive sex as ‘demeaning,’ but rather that the value of sexuality itself is to demean the seriousness of efforts to redeem it?” (222). 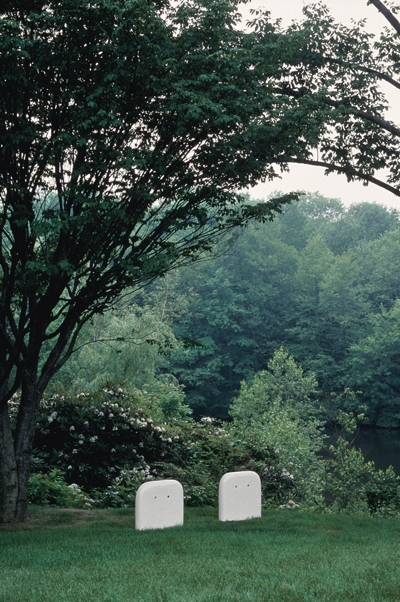 Refusing to redeem his representations of sexuality, Gober presents an artistic response to Bersani’s essay. Perhaps the installation most reflective of “Is The Rectum A Grave?” is Gober’s mournful and provocative “Two Partially Buried Sinks.” Displayed on patch of grass outside the second floor window at MoMA, Gober buries two sinks, which appear like headstones. Further articulating the sinks’ connection to AIDS, these sinks recall at once the losses due to AIDS from those who passed away to the disappearances of places of queer sex such as bathhouses and sex clubs.

Using Watney’s suggestion that “AIDS…offers a new sign for the symbolic machinery of repression, making the rectum a grave,” Bersani concludes, “But if the rectum is the grave in which the masculine ideal (an ideal shared–differently–by men and women) of proud subjectivity is buried, then it should be celebrated for its very potential for death. Tragically, AIDS has literalized that potential as the certainty of biological death, and has therefore reinforced the heterosexual association of anal sex with self-annihilation originally and primarily identified with the fantasmic mystery of an insatiable, unstoppable female sexuality. It may, finally, be in the gay man’s rectum that he demolishes his own perhaps otherwise uncontrollable identification with a murderous judgment against him.” (222).

So the question remains: if, according to Bersani and Watney, the rectum is a grave; is the sink both a grave and a rectum?

I’m not sure I have an answer, however, like Bersani, Gober also clearly understands the potential in representing the self-shattering possibilities of passive sex, reflecting and transcending the homophobic discourse against gay sexuality during the ongoing AIDS crisis. Placing this critique and subversive embrace in an institutional museum setting, Gober seems to be proudly saying, like Perfume Genius, “No family is safe when I sashay.”