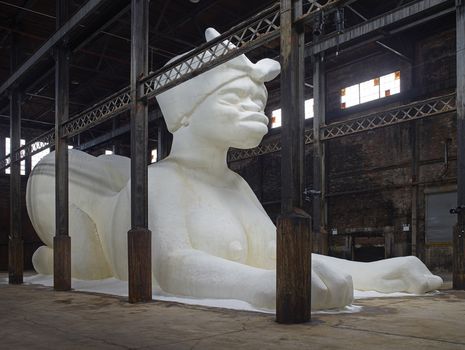 Mammy’s back and boy, is she pissed! Returning in the form of a blindingly white sphinx, artist Kara Walker’s mammy, made entirely out of sugar, looms large over the interior of the desolate former Domino Sugar Factory on the banks of the East River. Commissioned by Creative Time, Walker’s sugar mammy sculpture joins fifteen smaller brown candy sculptures of young boys carrying baskets of sugar in offering to the sphinx.

Measuring approximately 75 feet long and 35 feet high, Walker’s mammy sphinx gazes down on the dwarfed viewers, nude, displaying her realistically modeled breasts, butt and vulva. With her hands positioned in a gesture that can mean alternately “good luck” or “fuck you,” the sphinx is a beautiful and intimidating force to be reckoned with, layering references to racist imagery, the overwhelming history of slavery to both the sugar industry and black female sexuality and its continued resonance today.

Like much of Walker’s work, she titled her first public sculptural installation with a description fitting for her artwork. As the title reads, greeting visitors on the outside wall of the sugar factory as they sign wavers to enter the building:

As the behest of Creative Time Kara E. Walker has confected:

Or the Marvelous Sugar Baby

Built in 1882, the Domino Sugar Factory, located in the now currently hipster-filled Williamsburg (note: I witnessed an ironic fanny pack and a button-down shirt with a purple persian cat on the back while I was in line), was at one point producing half of the sugar consumed in the United States. In more recent history, the factory was the site of a major labor strike in 2000. Currently, however, the abandoned building is set to be torn down to make way for development aka condos.

A fearless artist whose use of antebellum imagery has made her controversial to a wide range of audiences, Kara Walker has long been one of my favorite artists. From her drawings to her iconic cut-out silhouette figures, Walker’s art is never easy to write about as she imbues each piece with such complexity, interrogating themes of gender, sexuality, race, history and power. Walker’s work offers no easy answers, uncovering the painful historical past and forcing the viewer to confront their continued participation and place in these histories. 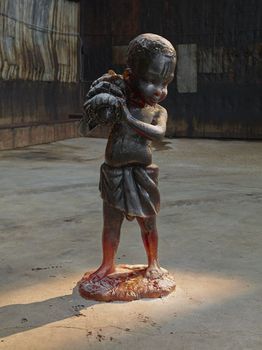 Interjecting herself into this boy’s club of big, Walker, as a black woman artist, subverts this artistic trend by making a pointed cultural and historical statement along with the jaw-dropping size of her sphinx. Merging the monumental visual language that has proliferated throughout the contemporary art world with the racist stereotype of another black woman–the mammy, Walker disrupts the art historical power and myth of the great American white male artist.

White Sugar, How Come You Taste So Good?

Using the striking and unsettling racist image of the mammy with her tied head scarf and exaggerated features, Walker directly places her sculpture into the historical narrative of black female sexuality, particularly the manipulation of sexuality during slavery. With her sweet bottom in the air, showing her round ass and her almost perfect vulva, Walker’s sugar mammy sphinx has frequently been described by critics and viewers as seductive. And they’re right: she is seductive both in her highly sexualized bodily form and her delectable material.

However, the term seductive in the context of a racist representation of a black woman takes on a deeper, if more disturbing, historical meaning, recalling academic Saidiya Hartman’s discussion of sexuality, rape and seduction under slavery in her book Scenes of Subjection: Terror, Slavery and Self-Making in 19th Century America. Like Walker, Hartman is also known for her devastating examination of the history of slavery and its continued legacy today. In Scenes of Subjection, Hartman reveals the development of the notion of seduction in the antebellum South as a means to define captive black female sexuality as both submissive and excessive, blocking their access to both consent and the ability to prosecute their masters for rape.

While the mammy sphinx’s seductive nature seems to participate in a different twist on sexuality, the history of the discourse of seduction undeniably haunts Walker’s sculpture.

Due to the troubled definition of the slave as both a person and property, which makes both will and consent impossible, Hartman describes that the laws in the antebellum South balanced this tension through the evocation of seduction. As Hartman states, “The dual invocation of person and property made issues of consent, will and agency complicated and ungainly. Yet the law strove to contain the tensions generated by this seemingly contradictory invocation of the enslaved as property and person, as absolutely subject to the will of another, and as actional subject by relying on the power of feelings or the mutual affection between master and slave and the strength of weakness or the ability of the dominated to influence, if not control, the dominant. The dual invocation of the slave as property and person was an effort to wed reciprocity and submission, intimacy and domination, and the legitimacy of violence and the necessity of protection.” (80). 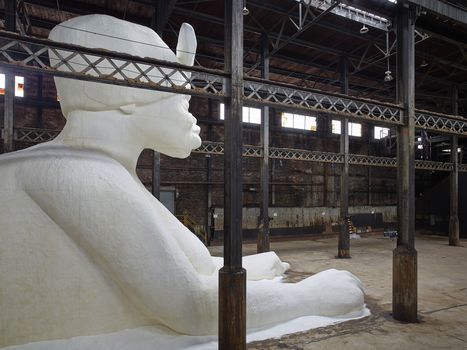 Through the discourse of seduction, the rape of enslaved women became an impossible concept, as black female sexuality likewise became defined as excessive. As Hartman explains, “Rape disappeared through the intervention of seduction—the assertion of the slave woman’s complicity and willful submission. Seduction was central to the very constitution and imagination of the antebellum South for it provided a way of masking the antagonistic fissures of the social by ascribing to the object of property an ensnaring and criminal agency that acted to dissimulate the barbarous forms of white enjoyment permitted within the law” (87).

Simply put, “it asserted that the captive female was both will-less and always willing” (81).

At first glance, the use of the racist imagery of the mammy may seem like Walker’s sphinx is both will-less and always willing. However even though this history is undeniably apparent and imbued within her form, the sphinx seems to transcend the narrative of the seductive and submissive woman, raising the question of how she has twisted the relationship to become the dominator over the dominated audience.

While her size and grandeur may account for this difference in seductive meanings, I would argue that the sphinx’s blindingly white color completely shifts the discourse of seduction, giving the mammy some sort of agency or will that she may not have if she was brown or black. Bleached white, Walker’s mammy may only be able to harness this power only through her white color, erasing our perceived historical distance from the horrid definition of sexuality under slavery as investigated by Hartman.

Nothing Is Ever Over

Perhaps even more than simply the interrogation of racist tropes and narratives themselves, Walker, in A Subtlety, harnesses these images to force viewers, and New York itself, to confront the utter inescapability of history. Like unearthing a forgotten ancient Egyptian tomb, Walker’s A Subtlety digs up the uncomfortable and yet, unavoidable past.

As New Yorkers, we have to admit that history isn’t necessarily our first interest, even though we do have a lot of it. Tearing down historical buildings to make way for bizarre glass condos, 7-11’s, Starbucks and Duane Reade’s, the histories we choose to remember and to preserve in New York seem to always have a particularly safe political resonance. Like the Domino Sugar Factory, most history gets razed, making way for luxury high rises and out-of-place architecture.

By placing a giant mammy sphinx and young boy sculptures into the historically rich and haunted (and haunting) space of the Domino Sugar Factory, Walker uncovers the unsavory history of the sugar industry, built on the backs of the enslaved for centuries. There is no conceivable way to walk around the overwhelmingly and almost oppressively burnt-sugar smelling factory without thinking about the history of the sugar industry. Just like the smell in the factory, its history is permanent. Every sugar packet, scoop and taste is imbued with the history of slavery. 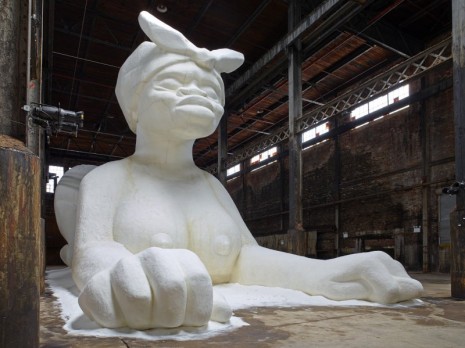 Similarly, that history, and many other similar narratives, are etched within spaces like the Domino Sugar Factory. While Walker does not directly and obviously engage with the near-unstoppable gentrification of Brooklyn in her installation, her revelation of the inescapability of history directly implicates the disappearance of these locales. Whether or not their current owners, tenants or visitors are aware, the ghosts, stories and bodies of historical narratives continue to haunt spaces.

As Saidiya Hartman states, “it is to envision the unimaginable, excavate the repressed and discern the illegible” (83).

By excavating the repressed and transforming it into a monumental sculptural statement, Walker has ensured that this history cannot be escaped. We are trapped within these historical narratives no matter how many condo buildings we choose to construct over them. Whether the sex-filled warehouses of the Hudson River Piers, the thousands upon thousands lost to AIDS or the unsettling history of the sugar industry, these histories cannot and will not disappear.